Okay, here's this week's entry in the Animal Alphabet.

If you've received a postcard from China recently, you might have been wondering about the creature on this odd stamp. 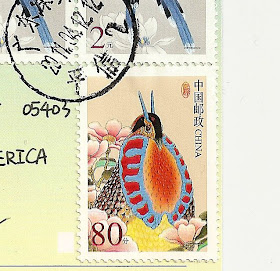 That's a tragopan, with its lappet extended. (The lappet is a sort of bib-shaped wattle that the male tragopan can unfurl for territorial or mating displays. Those odd horns are made of the same tumescent stuff.) There are five species of tragopan, but only one alliterates (and therefore suits this post to a T):

T is for Temminck's Tragopan.

Let me invite you to watch another ARKive video of the Temminck's tragopan's mating display. Like last week's creature, the tragopan can make some pretty astounding transformations of its shape.

I had a hard time figuring out what position to draw this guy in. Originally I had thought to draw it in three stages of behavior, sort of like the Pokemon-style self-portraits I've admired in the past. 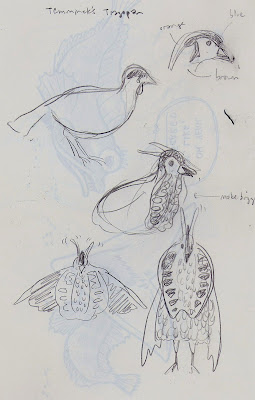 But time was a bit too pressing for that plan, since I'm still writing syllabi for classes that start at the end of the month.

If you are a recent parent, I do not recommend watching this video of the "crying baby" call that this tragopan apparently makes. Or, maybe, I dare you to do it.

Next week: Have I really not drawn a primate yet?
Isaac at 12:33 AM