I've written before about the way I enjoy putting a little lagniappe into the envelope when I'm sending out comics someone has ordered. And I've shown you little doodles of robots, which seem to be one of my favorite "fun things to draw."

Well, yesterday someone ordered the "Full Run" of Satisfactory Comics products, and I couldn't help adding a little robot doodle to the envelope, in addition to the lagniappe I tucked into the package itself. 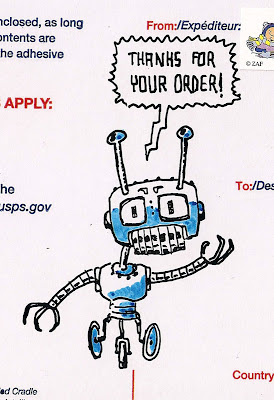 I know it's just a little five-minute doodle, and not especially awesome, but it was fun to make, and I thought I'd share it.

(Plus, I wanted to remind people that I still do have copies of most of our minicomics for sale.)

I think that when I drew that little guy I was thinking, in the back of my head, about this adorable little robot that Sarah Becan drew in my robot sketchbook a few SPXes ago. 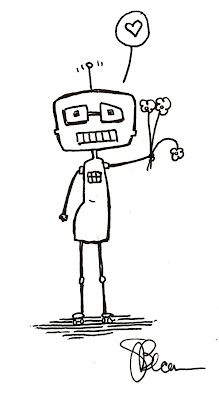 If it were any cuter, it'd be entering the Uncanny Valley, wouldn't it?
Posted by Isaac at 4:36 PM