Alphabeasts: R is for Rust Monster

If you know that from the entire Star Trek universe I chose the mugato for my Alphabeasts alphabet, then you might be able to predict what critter I would choose from the superpopulated realms of Dungeons & Dragons. Evidently I have a fondness for an awkward chimerical hodgepodge whatsis, so I had to draw the Rust Monster. 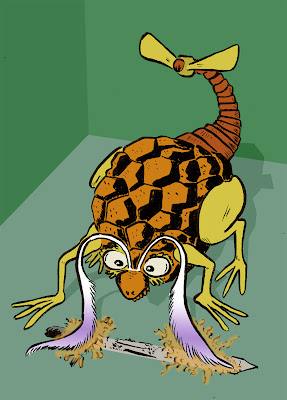 Like the piercer, the mimic, and the lurker above, the rust monster is one of those D&D creatures that only makes sense as a tactical obstacle in a dungeon-crawling game. If it attacks you in combat, it won't hurt you, but it very well might disintegrate your cherished +4 plate mail and enchanted longsword. It's kind of a jackass thing to for a DM to bring out, in most circumstances, though while doing my research this week I found a smart little blog entry that makes a case for the sort of game where the rust monster is not just appropriate but a sort of suitably frightening challenge.

But why does it look so dorky? Why the wingnut propeller on the tail, the Ben-Grimm hide, and the mishmash of different body parts?

Well, like the bulette and the owlbear, the rust monster was originally based on a crappy plastic toy from a bag of "Prehistoric" monsters you could buy in convenience stores when I was a kid. Here's a picture of the original toy, pulled from a cool photoseries that any D&D-philes ought to click over to look at. 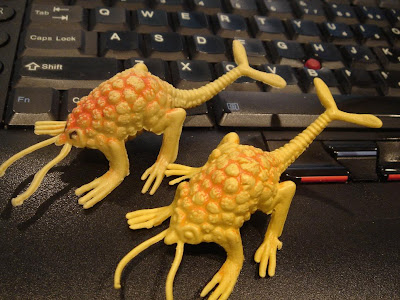 Since the first edition, D&D has apparently tried to de-dorkify the rust monster, but to me those revisions just don't ring true. The fantasy world of D&D is supposed to be a gawky, clumsy reworking of Tolkien and assorted folklore; the awkward ugly cartooning of David C. Sutherland III and the weirdo heavy-metal Aztec foofaraw of Erol Otus are the way adolescence is supposed to feel. Give me, instead, a lengthy pseudo-scientific explanation of its gimcrack ecology (search this PDF, and ye shall find) and the threat that my mithril shield or gauntlets of ogre strength may not survive the encounter.

Anyway, given the rust monster's origins as a stiff plastic toy, it turns out to be pretty hard to "animate" into a different pose: those legs are too short to do more than waddle, and there's not one joint in the critter's body from its nose to the base of its tail.

So I did a little doodling. This week, it struck me that I could put my doodles on the postcards I was about to send, up in the area where the cancelation mark will go. 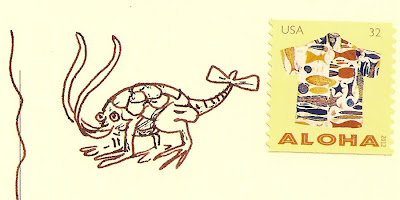 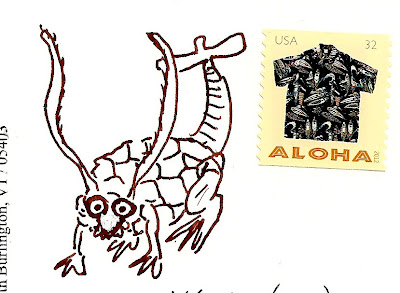 I hope you have enjoyed this little jaunt down Curdled Nostalgia Lane.

Next week, a tribute to a small-press comic that you should all be reading.
Posted by Isaac at 12:01 AM

Hey, I really like this weird little guy. Something about his rocky hide and crazy feathery antennae just naturally makes my thumb go in the up position. So yeah, thumbs up on this fella!

Rusty, crusty, creepy, crawly, clunky & crazy. What's not to like?

I'm glad y'all like the rust monster! I was disappointed not to see more of them in this week's Alphabeasts.

Lupi, you may be in for a pleasant surprise, if the mail hasn't come yet...

Thanks for the link to my blog. It was cool to stumble upon it, after I stumbled upon your post. :)