Speaking of Dan Clowes and his new book...

I enjoyed Wilson, which I read on the day of its release. It's got an unusual pace. It's constructed of single-page comic strips, some of which are separated by years of intervening time, and some of which happen indefinite hours or moments apart. Assembling these disjunct moments in the narrative is a big part of reading and understanding Wilson.

But one page, and really one panel in particular, stood out to me on a personal level.

Maybe it's because I've been reading with great interest James Sturm's column for Slate about quitting the internet cold turkey, or maybe it's because I'm becoming increasingly self-conscious about the time I spend consuming rather than producing in front of this little screen.

But when Wilson—misanthropic enough to puncture any social piety, but also repugnant enough that we can't follow him in all of his criticisms—surfs the internet ... 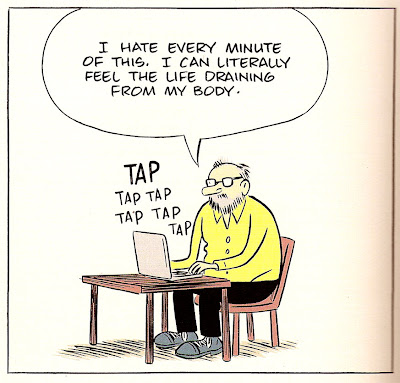 Well, this one put a dagger of ice through my withered heart.

And then I decided to blog about it.

Even taking the panel out of context, you can see the stasis in Wilson's posture, the gravity bending his pipecleaner arms and his hunched-over back. From this angle, you can see how hopelessly small the Powerbook is, and how clownish his features (and his feet) have become.

Taking the panel in its context, we see Wilson almost totally static, with small changes of hand position from panel to panel. Wilson's not a very active character, but this sequence embodies the combination of inertia and disdain that characterizes so much of our online universe. (By hating things, and merely rejecting them, we never have to reflect on ourselves or to change.)

Here are the third and fourth panels from this sequence, so you can see what I mean. 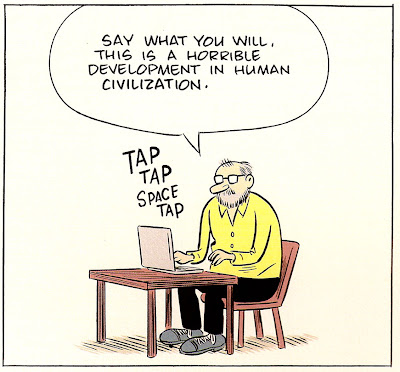 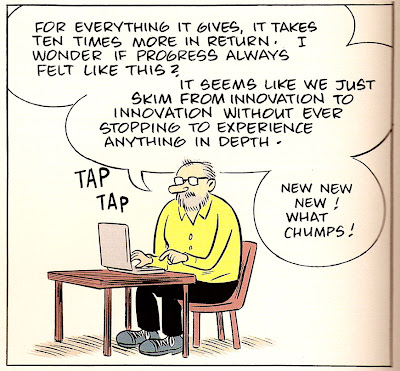 Mike and I have been talking about doing a series of "one-panel critics" posts. Maybe there will be another such post shortly.
Posted by Isaac at 4:05 PM No comments:

Doodle Penance: "how do you pronounce daniel clowes"

Mike here, posting the Doodle Penance for a change. Today's formerly fruitless search item: "how do you pronounce daniel clowes." Well, it so happens that Isaac and I are well qualified to answer that question, having both had the pleasure of meeting Mr. Clowes more than once--myself as recently as last night, when he appeared at a local DC bookstore to promote his new book Wilson. 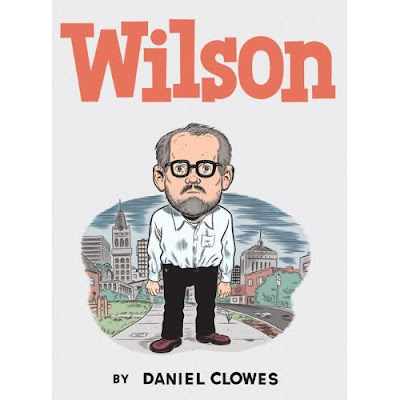 And indeed, the first word uttered by Mr. Clowes was his own surname, to correct the first of several mispronunciations of it by the employee who was introducing him as "Daniel Clothes." In an instant Mr. Clowes swiveled his microphone to his mouth to pronounce his name rightly, which did not stop the employee from calling him "Daniel Clothes" at least twice more. (At one point Mr. Clowes lowered his head in mock despair.)

So let's clear this up right away: it's NOT PRONOUNCED LIKE "CLOTHES." Or like "CLOSE" (with a voiceless S). Nor is it pronounced like "CLUES" (though it might have been in Chaucer's day). No, Isaac's handy doodle below should set the record straight once and for all: 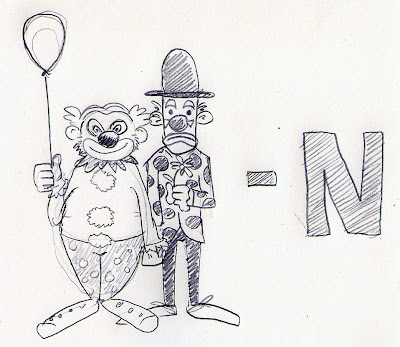 Got it? Maybe if Mr. Clowes had resorted to the language of cartooning, as above, he might have reached the reptile brain of the employee and fixed his goofing.

Clowes was joined in the formal part of his appearance last night by Washington Post writer Dan Kois, who helpfully shouted out "Clowes as in cows," but to equally ill effect. But no matter; the mispronunciations were soon forgotten as Clowes & Kois (as in "voice") jointly commented and questioned an amusing slide-show presentation of material from Clowes's life and career, including a picture of 13-year-old Dan; two pages from his early minicomics ("Melvin the Clown" and "Sidney the Cat," based on TV's Bozo the Clown and an animated cartoon of Felix the Cat); snippets of Clowes's video for Tom Waits's "I Don't Wanna Grow Up" as performed by the Ramones;

and a few minutes from Faster, Pussycat! Kill! Kill! including a rube of a gas-station attendant scorned as an "eightball" mere moments before someone else (or was it something?) is described as "like a velvet glove cast in iron." Anyway, it was a pretty cool appearance, and I'm glad I got to check it out. And I even got Mr. Clowes's permission to post this sketch, so check it out: 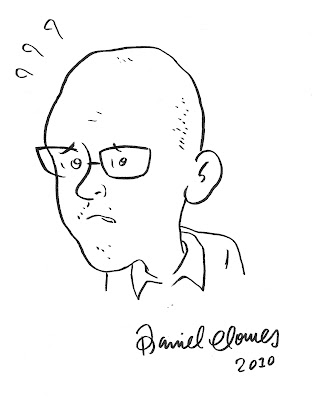 Pretty sweet, huh? Meanwhile, you may have noticed that I haven't exactly offered up my own image for this week's Doodle Penance. Fact is, Isaac's cartoon pretty much covers it, plus I had a narrative to offer on the very topic that takes care of it as well as, or better than, another cartoon. But I do have a doodle, inspired by the cover to Wilson and dedicated to my co-cartoonist: 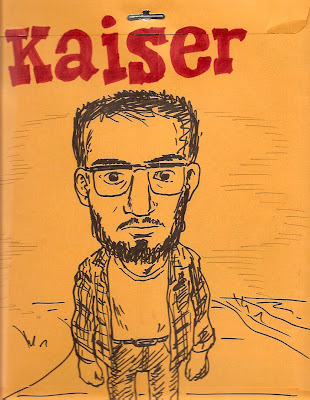 Not the best likeness, by a long shot, but perhaps partaking of some small measure of that creepy face-front pose that Clowes has been seeking at least since his mid-70s sketch of Gerald Ford (pictured in the slide show) and exemplified in this charming specimen from Eightball 8: 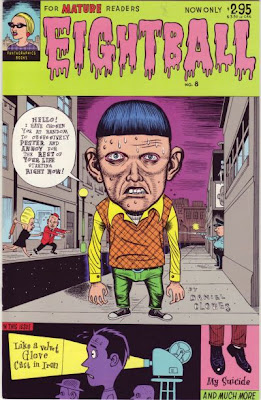 So it's May 3 (for a little while, yet), a day with interesting significance for the works of Geoffrey Chaucer, supreme English poet of the fourteenth century (no matter what those Langlandites say!). The significance of May 3, 2010, for me was Chaucerian twice-over: first, I graded a bunch of Canterbury Tales exams (um, whoot?); second, one of my grad students sent me THIS: 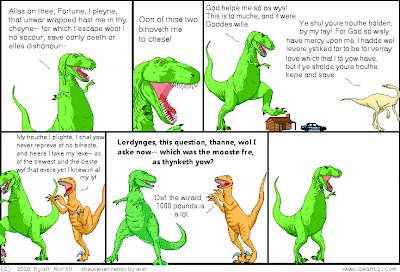