So: my "real" entry for this week's Alphabooks appears (as a character and as a narrator) in a couple of story collections by Italo Calvino, Cosmicomics and t zero, as well as in a couple of stories in Numbers in the Dark. Yes, my friends, as it should be, Q is for Qfwfq. 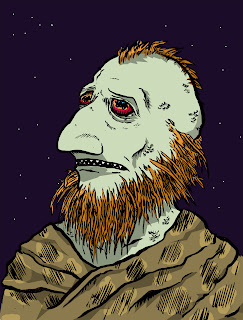 Qfwfq is impossible to draw. He has lived for many, many millions of years, since before the materials of the sun coalesced into a star, and he has lived as many different things—a sightless mollusk, a pre-terrestrial vertebrate, an essentially human (if immortal) being, and even for "about fifty million years" a dinosaur. In fact, in the short story "The Dinosaurs," Qfwfq describes himself as the only dinosaur to survive the mass extinction.

He goes on to pass in future (presumably mammal) societies, though he is still really a dinosaur and somewhat self-conscious about his status as a legendary terror and scourge. I imagine that he must change form very gradually, when his form changes, perhaps over thousands of years.

That's the moment in which I've drawn him, awkwardly making the transition from dinosaur to something more human. I hope you can tell that his beard is made of ragged little kiwi feathers. 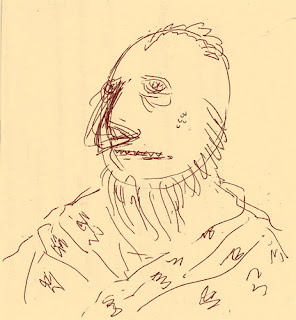 Qfwfq is a complex guy. If you're interested in serious speculative fiction, and you haven't read Cosmicomics at least, you really owe it to yourself to get hold of a copy.

Next week: high fantasy (you know, for kids).
Posted by Isaac at 9:04 PM No comments:

Alphabooksbeasts: Q is not for Quickbeam, after all

Last week I hinted that I was planning to use some "high fantasy" for this week's non-Donjon Alphabooks. And in my spreadsheet planning stage for the project I had picked out Quickbeam, one of the ents in Lord of the Rings, to be my Q.

But I've had a better idea—a better Q character who is at least technically not a human being. I'll get him up on the blog in a few minutes.

Here's the thing: I've never actually read Lord of the Rings. I don't have much emotional investment in it. I started the first book, when I was too young to understand it, and I've never tried since then. I know the story, of course, and I've done enough research to know how Quickbeam fits into it. But I don't know anything about his personality, really. I didn't have a feeling for him. 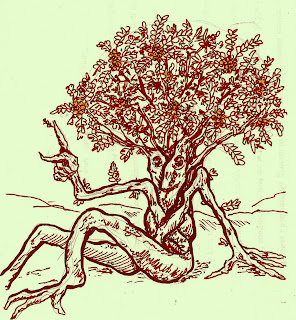 It turns out that I do have a quickbeam or rowan tree next to my driveway, though I know it as a mountain ash. It was the source of this doodle, though I'm sure I could have produced a more faithful rendition of it if I'd been sketching from life instead of memory, or trying to do this in my "official" Alphabooks style. On the other hand, there's no way I'd want to draw all that fiddly foliage with a brush.

Alphadonjon: Q is for Queen Sonya the Huge 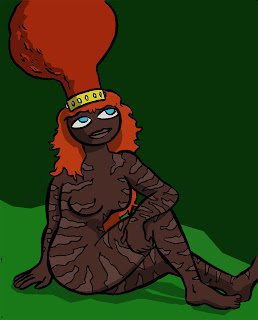 She's a giantess. That absurd balloon on her head is the crown of the Goblin King. Maybe I should have put her on a palanquin borne by a brace of little goblins—if nothing else, that would have given you a better sense of her scale—but then it would have taken another couple of days, I bet, to get her here on the blog.

Sonya's actually pretty fun to draw. Maybe that shouldn't surprise me, since she's pretty obviously a Trondheim design, and his characters are always fun to draw. And I think I must have been taking a page out of Rob Ullman's book when I worked out this pose, though as usual I think I lost something moving from the sketch to the finished version. 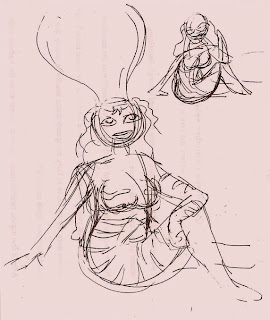 (What did I lose? A little assertiveness? A little sauciness? Some junk in the trunk?)

Alphabooksbeasts: P is for Pooh and Piglet

I know I still "owe" Alphabooks a canine that starts with O, for last week, but I wanted to get this week's P post done and posted last night, and since it was nearly done when I had to turn in, here it is, slightly out of order.

But you already know: P is for Pooh and Piglet. 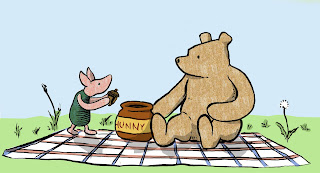 I cannot tell you how much I love these guys. They feel as close to me as siblings. I know stretches of the Pooh books by heart, or nearly by heart. If you have not read them, get on it.

Your heart isn't finished until you've read these books to someone.

For the record, yet again: Ernest H. Shepard is one of my cartooning heroes. I do not believe in the Disney Pooh. It is, more and more from year to year, an abomination in my sight.

This week's Donjon entry for Alphabooks features two characters who have actually met (or at least seen each other) in the very incarnations and apparel I've drawn them in. 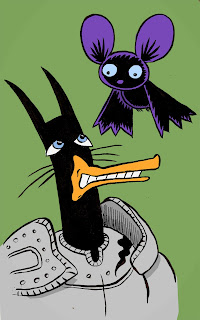 P is for Papsukal, the son of the Herbert the Duck (and, I think it's safe to say, Isis—I mean, those aren't duck ears and whiskers he's sporting). He's a nasty guy, all in all, and he becomes one of the villains of the Twilight storyline.

P is also for Pipistrelle, the little bat who accompanies Marvin and Marvin the Red on their end-of-the-world adventures, though I'm not sure I've ever seen her called anything but "little bat" in the American translations. A pipistrelle is, of course, the littlest sort of bat that lives in Europe; maybe the people at NBM thought that bit of knowledge wouldn't translate.

Anyway, look, here they are in the same panel together: 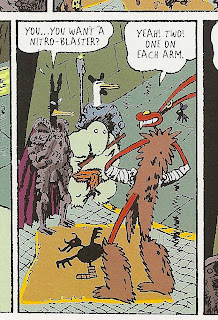 That's Pipistrelle flapping under Marvin the Red's ear on the right.

These Dungeon books are so much fun.


Next week: at least they didn't translate her epithet as "the Gross."
Posted by Isaac at 4:07 AM 2 comments:

This O entry for Alphabooks is a full week late. What can I say? I've been busy getting those Animal Alphabet postcards ready, but I'm trying to get back on track.

Here we see two characters in Trondhgeim & Sfar's Dungeon comics, Ormelle and Okto. O is for them. 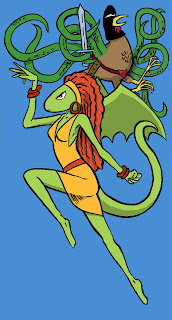 Ormelle is a dragon lady, the mate of Marvin's son Baal in the Twilight section of the timeline. She's also the lover of Marvin the Red. She has a strong, independent personality, and she seems to know what's what. She's also hell on wings, when it comes to fighting.

I regret to say that I know less about Okto, except that he is a former bearer of the Sword of Destiny, and that he introduces himself like this when summoned from the mists of time: 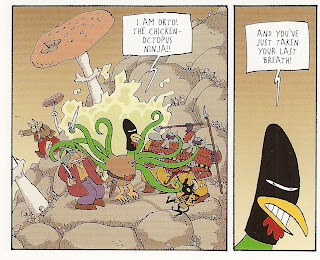 I also don't have much in the way of notes of false starts this time. This is probably the dullest blog post about a chicken-octopus ninja that you're going to read this week. 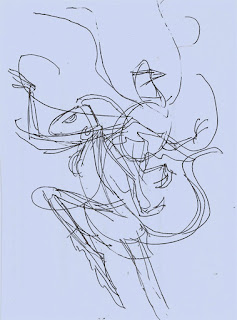