The One-Panel Critics: How Much Does Kryptonite Cost?

The first assignment I'm giving my students in this year's iteration of the graphic novel course is to read A Contract With God alongside a comic book that could have been on the stands when Eisner's book was first published. And this time, because I have seventy students in two section of the class, I can't rely on the Joe Stinson Collection, so I'm having everyone read a single issue of Superman published late in 1978.

In Superman #331, we visit a jail that has been specially designed to house super-villains (the Atomic Skull, the Parasite, and Metallo, possibly with Terra-Man on his way). Each of them dwells in a small box (with a cot and a few vaguely delineated furniture-like objects). Each cell is specially engineered to prevent the escape of that specific villain. (Also, the boxes are draining the villains' powers into special devices that another super-villain will use, but that's neither here nor there.)

Here's Metallo, chillin' in his crib, as it were. Aren't cyborgs cute in slacks? 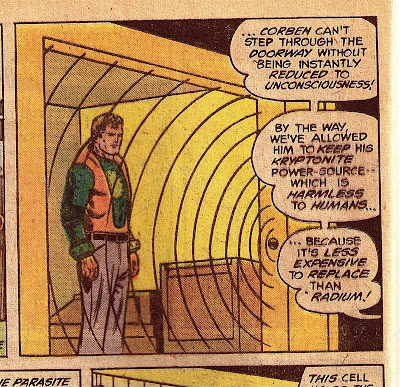 And why does he still have a chunk of Kryptonite powering his robot body? 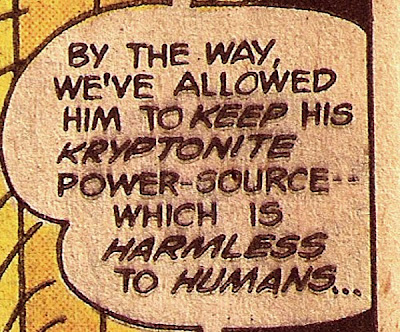 ... Well, since Kryptonite is harmless to humans, I'm sure that it won't pose any sort of problem in the future. 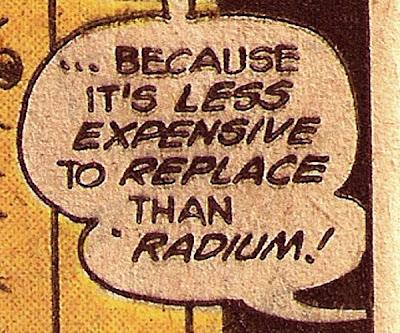 Oh, and also KRYPTONITE IS CHEAPER THAN RADIUM.

(Radium, by the way, currently costs something like $25,000 per gram. That's expensive, sure, but it seems to imply that you could incapacitate Superman for about the same price as a year's tuition at some snooty colleges.)

The radioactive fragments of an exploded planet light-years away from us cost less than $25,000 per gram.

This is the sort of thing you would only write if (a.) you didn't think your audience was paying very close attention, and (b.) you didn't care what kind of mess you were leaving for other writers who might arrive after you. Thank you, Martin Pasko.

Actually, I suppose it's also possible that Kryptonite is just more efficient, as a power source, than radium — or that Kryptonite lasts longer and therefore needs to be replaced less frequently. But that's not quite what our jail warden seems to be saying.

I don't have much else to say about this. But let's just mark it as another entry in the "comics are dumb" file.
Posted by Isaac at 9:21 PM 6 comments:

This is sort of appropriate material for my first day back in the classroom after the summer "vacation":

Over on his Transatlantis blog, my friend Tom Kaczynski has been posting an interesting series of short essays about the history and condition of comics education in America. 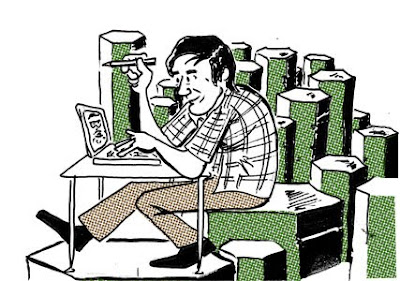 Still, I think the "interview" will be interesting to some of our regular readers. If nothing else, I've tried to raise a few questions of my own while answering Tom's. Click on over and check it out. Drop a comment onto Tom's blog if I've managed to get anything wrong.

(I should also mention that there are plenty of resources for comics education over at the website of NACAE, the National Association of Comics Art Educators. Why, some of those resources were even contributed by yours truly.)
Posted by Isaac at 11:52 PM No comments:

I think I've only hinted about it on the blog so far, but this week I am excited to say that I have in my hands a copy of the University Press of Mississippi's new book Daniel Clowes: Conversations. 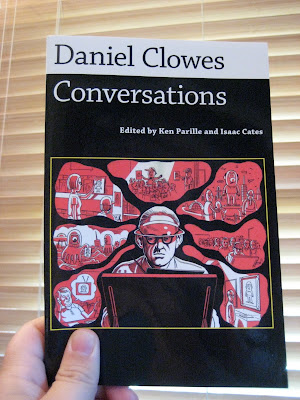 It's great to see this in print. It collects a number of extensive and obscure interviews with Dan Clowes, reaching back to his first interview ever to see print (conducted back in 1988). A couple of these pieces have never been published in the United States before, and a couple of others appeared in small-press zines that not many people have seen. 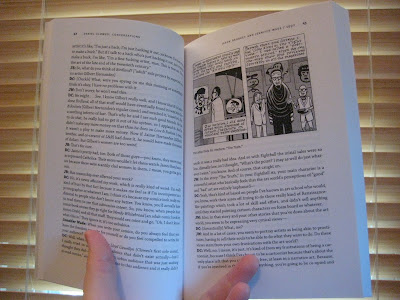 The collection isn't copiously illustrated, but this is the sort of rare comics-related artifact where the text is really the selling point. Clowes is an articulate and interesting person, with a sharp wit and broad interests in pop (and high) culture. Looking through this book's index gives you a sense of how broadly the conversations in the collection can range: Thor, thought balloons, Howlin' Thurston, Adrian Tomine, John Travolta... 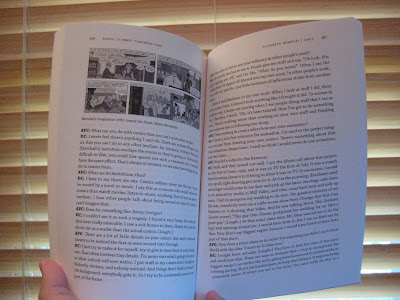 The collection concludes with a 24-page interview conducted by Ken Parille, one of the editors, that Clowes gave specifically for the book. This is the place where Clowes basically says that Eightball is finished, and that complete works like Wilson are going to be his main format henceforth. He also has the chance to reflect on (and amend) points raised in the earlier interviews.

If you're interested in Clowes's work, or if you're a student of the "alternative" comics scene, this is a good book to have on your shelf, and a nice collection to read gradually over a span of a couple of weeks. 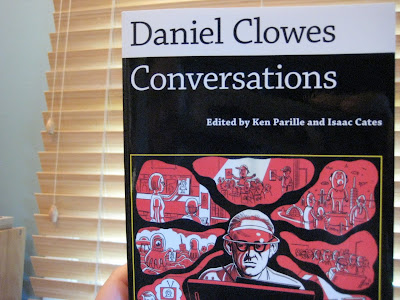 And I should know, because I'm the other editor of the book.

Why don't you pop on over to Amazon and order up a copy of Daniel Clowes: Conversations?
Posted by Isaac at 5:45 PM 4 comments:

Today would have been Jack Kirby's ninety-third birthday.

In the past, I've posted brief essays on Kirby's kinetic page composition, and on his design sense, both for characters and for machines, and I've frequently posted doodles and swipes of Kirby's drawings, from Etrigan to Kro and Ikaris, from Ulysses Klaw to Scott Free.

Today, I thought I'd celebrate the King's visual legacy by "covering" a panel from an issue of Kamandi that got lodged in my imagination (and my memory) when I was something like six or seven years old. 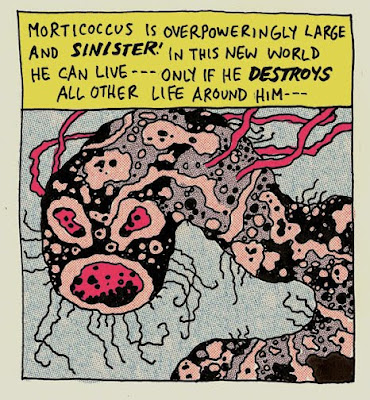 It still gives me the shivers. Morticoccus, the Living Germ, released from his prison of decades by the misbegotten Misfit, ready to destroy every living thing he encounters, until the world itself is dead.

I don't intend this as a memorial to Kirby. Other people (and little stuffed bulls) will do a better job with that. I just wanted to spend a little time this morning reworking an image that I'll never forget. It's personal, I guess. But it was good to get that into my notebook.
Posted by Isaac at 1:40 PM 2 comments:

Will No One Rid Me of This Abominable Pun?

Where did I get this terrible pun? 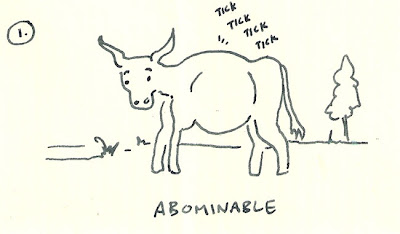 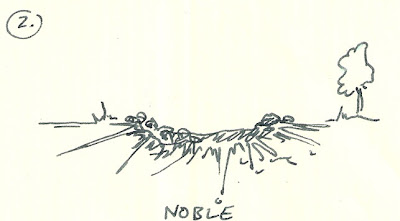 It helps if you say the words slowly. And think of the two images as a comic, representing two sequential moments in time.

I know I didn't get it from Mike. I've had this pun in my head since elementary school.

Maybe I got it from The Hodgepodge Book? Somehow, I don't think so.

I think that if I saw the original illustrations, I'd recognize them. But where?
Posted by Isaac at 11:00 PM 9 comments:

The Knight of the Dopey Countenance

Recent conversation in the comments section of an old doodly post I made in 2008 has suggested that I ought to post a comic from our file of uncollected materials.

At the ICAF conference in 2005, Mike and I started drawing our first branching (or "choose your own") comic. The second of these, begun a year later at the same conference, was called "The Graveyard of Forking Paths" and eventually appeared in Satisfactory #7.

The first branching comic, "The Knight of the Dopey Countenance," appeared alongside "Graveyard" in an issue of Palimpsest, but we've never put it in one of our own comics. There hasn't really been a place for it, and I liked "Graveyard" better because I thought I'd made a mistake by beginning "Dopey" in the middle of the first row.

Now we have, I hope, fixed that small bit of disorientation. Click, enlarge, and navigate, so you can see all the different endings that our thick-headed knight manages to reach. Follow the green arrows, but don't cross the thick panel borders. 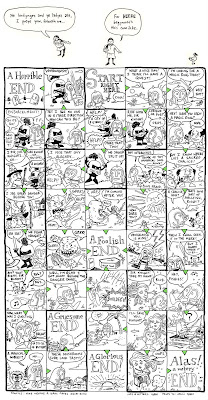 As always, props go to Jason Shiga, whose Nickelodeon strip "April Fooled" was our direct inspiration. (You can find it on his website under "strips" and then "Nickelodeon.")

I have some notebook pages pertaining to this project that I might post later this month, as a sort of "director's commentary" or something, if you're interested.
Posted by Isaac at 11:27 AM 8 comments: