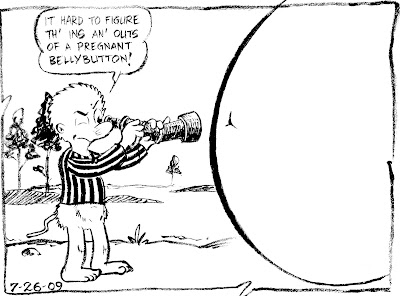 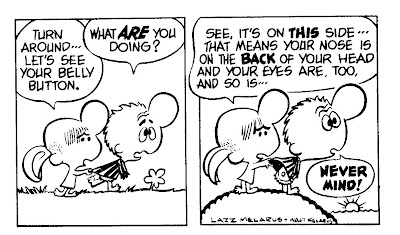 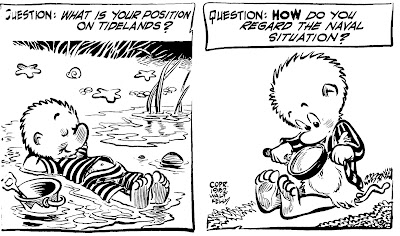 PS: I would like to note that I drew my doodle before consulting any images of Pogo, which is my defense for the wonky proportions of the possum.
Posted by Mike at 1:52 PM 3 comments:

Doodle Penance: "isaac comics i don't even know you"

Click here for today's installment of one of my favorite current strips, Richard Thompson's Cul de Sac. Then compare it with today's (belated) installment of Doodle Penance, on the search term "isaac comics i don't even know you" (below).

Too bad Isaac himself couldn't join in the Doodle Penance this time around, but he is justifiably busy with other things at the moment. In the meantime, I'll try to make up for his absence--and my belated Doodle Penance entry--with another solo post or two later this week.
Posted by Mike at 4:46 PM 3 comments: 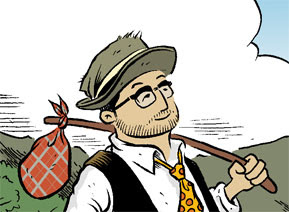 (That's a drawing by our pal Ben Towle.)

For reasons having to do with my location, I will probably not be making any posts for over a week. Mike has his own imminent reasons for posting a little less, too, but maybe he'll be able to take up a bit of my slack.

Anyway, you can still order comics from our big summer back issue sale. They'll just ship a little less rapidly than usual. (By the end of the month, for sure.) I should be back in service before you asphyxiate from your bated breath or anything like that.
Posted by Isaac at 9:10 AM No comments:

This week's Doodle Penance is a little rushed on my end, because I've already got a lot to do today, and I wasted a bunch of time this morning reading reviews on The A.V. Club for no reason.

Someone came to our site this week looking for "create your own supper character."

I didn't have time to ink or color this week, but I'm sure you can see where I was going with this. 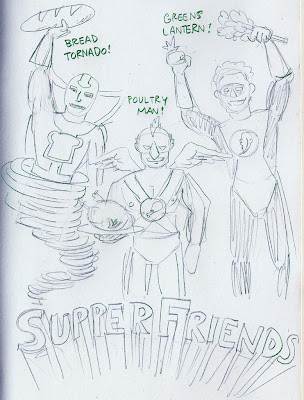 Click to enlarge, if you must. It's what it looks like: Poultry Man, Greens Lantern, and Bread Tornado.

Mike? What have you got this week?

—Also drawn in haste, but with love; this week, I have a culinary homage to Bryan Lee O'Malley: Knives Chow. 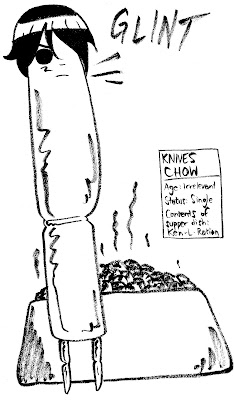 Judging from the rockets' red glare, the month of June must be over, which means our stint as guest artists on the Partyka website has come to a close. We're followed, over there, by the awesome stylings of Chadwick Whitehead. And while the "Daily Drawing" feature remains a splendid place to pause in your web perambulations, if you want to see us there, that boat has sailed.

We managed to color one set of lecture doodles that didn't make it into the "Daily Drawing" rotation. It's from an ICAF conference a few years ago—apparently I was feeling doodly during some of the presentations. 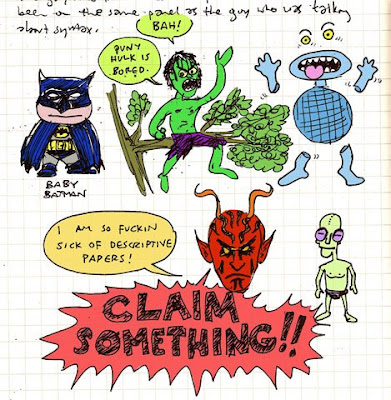 Mike did a nice job with those various odd elements, and since we're not constrained by Partyka's dimensions here on the blog, I thought I'd give you a few close-up views, as an extra bonus. As usual, the details raise more questions than they answer. 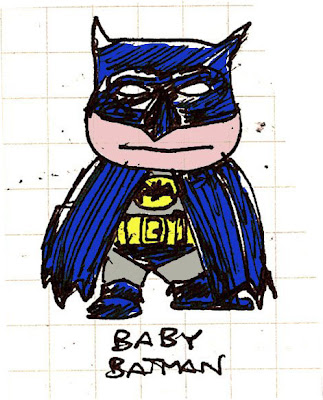 Isn't he adorable? Is that the real Batman, hit with a reverse-aging ray, or is it just a kid dressed for Halloween? 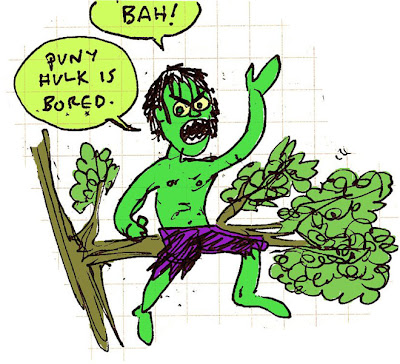 How did Puny Hulk get up a tree? Why isn't he beefier? Would Hostess Fruit Pies lure him down? 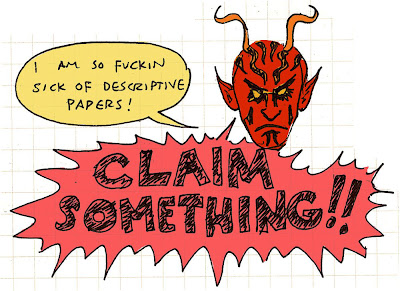 What was I listening to? Why was I so fed up? Wasn't I learning something anyway? Is that supposed to be some mutated version of Kirby's Mokkari? Does a yellow Apokoliptian turn red when he's angry? Or does that furiouth faith jutht thuggetht a Thith?
Posted by Isaac at 1:53 PM 1 comment:

This week's "Doodle Penance" comes from someone who reached our website looking for "model sheets beard."

I'm sure that this anonymous googler would have had more luck clicking over to Jon Dyer's beardstyles chart, or his Quest for Every Beard Type. But we here at Satisfactory Comics try to provide a service, so we're going to provide some doodles of beards today.

In the past, there has been some conversation about which comics characters have the best beards. My intent here is not to provide criticism or evaluation—Indeed, I haven't even mentioned the best beard in comics—but merely to display a small gallery of styles. My gallery here is limited more by my own doodling time than by the range of possibilities.

Here we see a couple of fine beards from Fantastic Four, around issue 48 or 49. 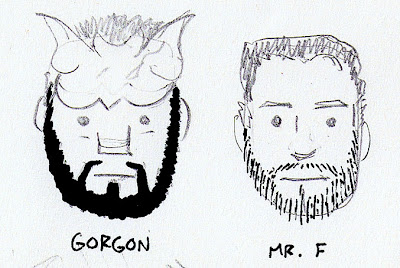 Here are a couple of fairly obscure 1960s Marvel villains with excellent and distinctive facial hair. 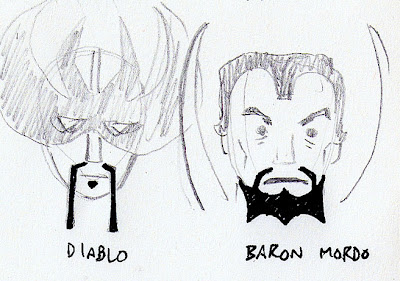 And here are a couple of comics characters who just let the whole beard grow. 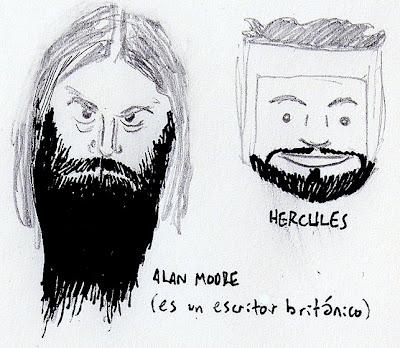 
The other thing I ought to use this Doodle Penance for is to give Mike, once and for all, a model sheet for my own beard, since he can't seem to remember how it works. He's not the only one. I had a conversation (by email) with a cartoonist friend who said he'd never seen my beard, even though we've met up at least five or six times since I started wearing a beard two and a half years ago.

For the record, this is how it grows out of my head. 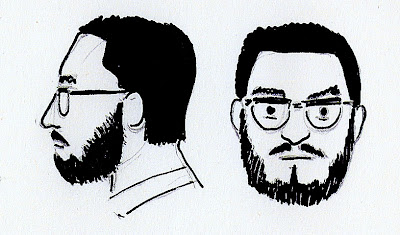 —Isaac, I have doodles of six different beard styles. Most of these are absent from Jon Dyer's chart in the precise forms shown here, though there are similar styles, to be sure. We start with a style that I have often wished to see on modern faces but which I have thus far seen only in ancient statuary and hieroglyphics: the Pharaoh. 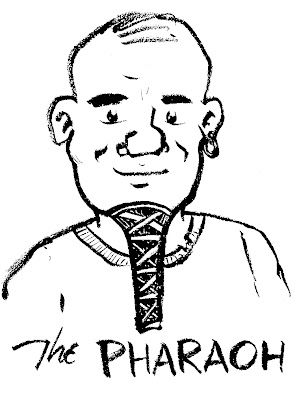 Next, a style whose variants were sported by such well-known figures as Whitman, Tolstoy, and, especially, Marx: the nineteenth-century intellectual. 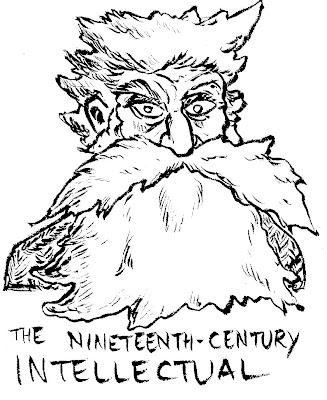 Next, a style that would not be entirely out of place in the cartoon world of Gustave Verbeek's Upside Downs, though it misses the point somewhat in looking the same whether upright or topsy-turvy: the symmetry. 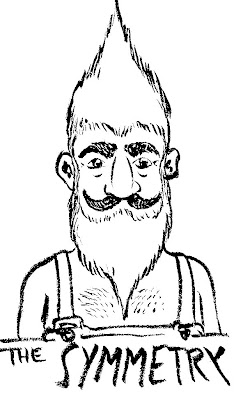 Then we have a "style" that might better be described as a disorder, and which might well be worn by one of Grant Morrison's pirates of Manhattan (from Seven Soldiers of Victory). Alongside Nobeard and Allbeard, there'd be this guy—but what would you call him? His beard style is called the negative. 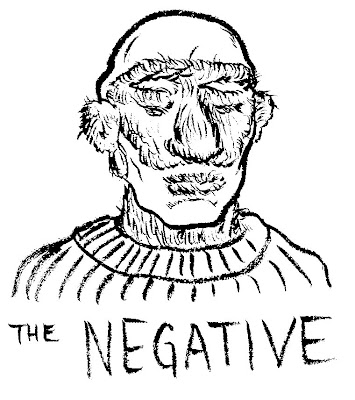 This penultimate style is based on a description I heard of a linguistics professor whom, sadly, I never saw with my own eyes. "Forked red beard" is what I was told, in a nutshell. A darker model below portrays the Cambridge linguist. 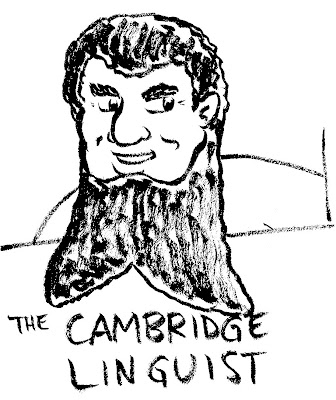 Last and probably least, we have the Cates, also known as "Mind the gap"—least because, despite its admonishing alias, I failed to recall that there should be a space between the two halves of Isaac's mustache. The beard proper, however, is fairly accurate in this blockish rendering, if the beard may be construed as separate from a detached mustache. 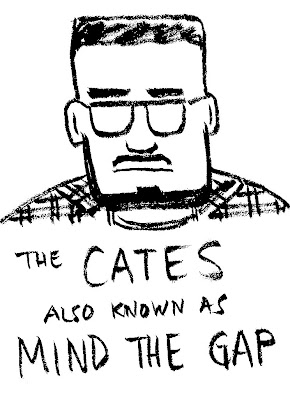 Looking at this erroneous rendering, I can see why Isaac keeps his mustaches divided: there's something shady about that character above, though I can't quite put my finger on it. At any rate, them's my beard models. Further evidence, if any were needed, that I have kept clean-shaven as long as my chops have needed razoring.
Posted by Isaac at 12:28 PM 7 comments: