... And just like that, here's another "Doodle Penance." This week, someone came to the site looking for "bede comics for sale."

I happen to know that there is an extraordinarily cute black-and-write cartooned children's booklet (it's stapled, so in some ways it resembles a minicomic more than a book) called The Story of the Venerable Bede, by Beryl McCartney, available in the cathedral in Durham where Bede is interred. I thought for sure they'd also have this cute little book at Bede's World in Jarrow, but I can't find any sign of it on their website. (That's right: the website for an eighth-century Anglo-Saxon monastery.) Anyway, dear Google searcher, if you contact both of those places, you might be able to get the booklet for £3 or thereabouts.

On the other hand, maybe a cute kids'-book approach is not what our Googler was looking for. In that case, let me show you a house ad for the rare (because it only existed in an alternate universe) 38th issue of Bede Comics, which introduced, as you can see, the sensational character find of 730: 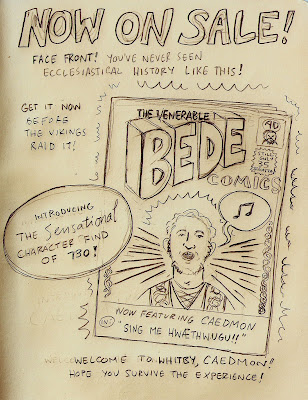 I'm pretty sure Bryan Talbot got hold of this extra-dimentional rarity, and perhaps a few other issues of Bede Comics, when he was working on his massive Alice in Sunderland: 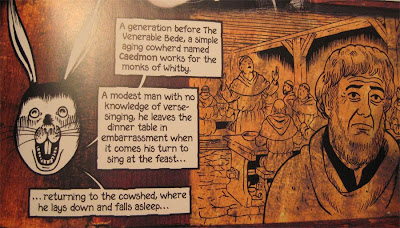 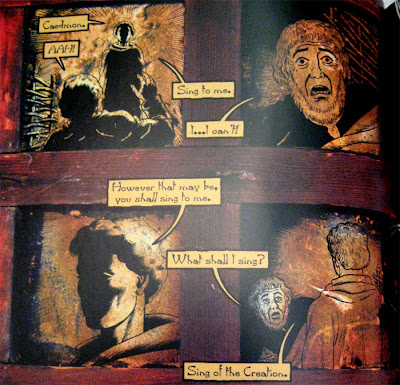 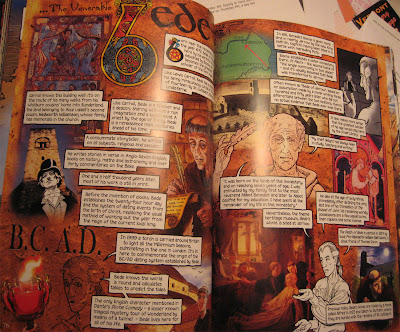 Mike's off traveling this week, so I guess he gets a pass on doodling. Hopefully I've been Medievally learned enough that he won't feel like our brief was mishandled.
Posted by Isaac at 12:53 PM No comments:

Here's another week-late "Doodle Penance." A couple of weeks ago, someone found the blog while searching for "comics about sauron."

Now, I suspect I know which of our pages drew this searcher to the site, but it's true that Sauron is a subject Mike and I really haven't broached. So, in order to satisfy that long-gone Doodle Searcher, here's some of our faux comprehensiveness:

Mike got his "doodle" done first. He adds, he says, "some relevant text" to the template from Ryan North's Dinosaur Comics, by which he has been much charmed of late.

Please click to enlarge, because this blog template's not good at displaying Dinosaur Comics legibly: 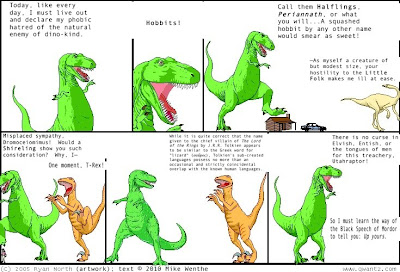 Mike adds, "I am pleased to note that a search for the terms 'hobbit' and 'hobbits' in the archives of Dinosaur Comics turned up no hits."

As for myself, by dint of the peculiar reading practices of my childhood, "Sauron" to me never primarily signifies the End Boss of the Rings. Rather, Sauron is this guy: a psychic-vampire were-pterodactyl predator on mutants whom the Claremont-Byrne X-Men encountered during their post-Magneto's-Antarctic-Base sojourn in the Savage Land. Again, click, if you want to see my scribbles bigger. 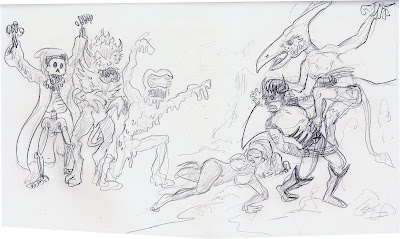 Here are some "process" thumbnailing doodles that I include simply for the sake of completeness. You needn't click on those. I have to say: Sauron's not as easy to draw as I thought he'd be. Those wing-arms of his are pretty hard to work out, and his head is a weird shape. 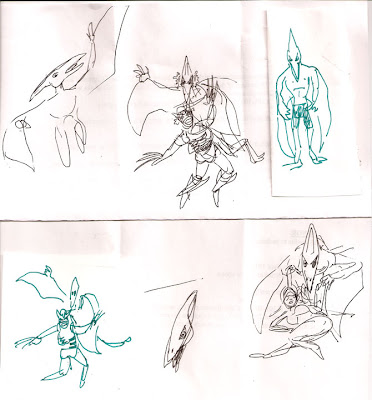 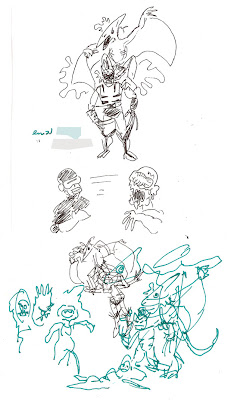 Uncanny X-Men #115 was one of the first comics I ever owned, and I read it to pieces, engraving it into my brain so thoroughly that I still had a clear visual memory of Sauron hypnotizing Wolverine into thinking his teammates were monsters, a couple of decades after the last time I looked at the comic. Still, before I could draw this doodle, I felt I had to do some image research.

Here's the cover, yanked from the Grand Comics Database: 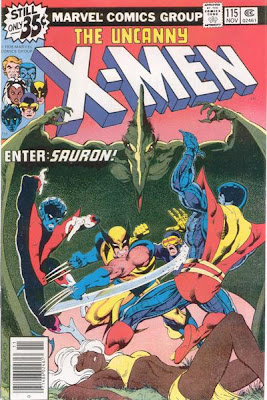 The previous issue ends with the revelation of Sauron as a villain, resurrected (or retconned into survival) from a pair of issues in the Neal Adams X-Men era, in a splash panel that also contains some stunningly pulchritudinous Storm cheesecake. (I am stunned also because the seven-year-old Isaac that grabbed that issue from the newsstand didn't even register it.)

Wolverine, in his early one-dimensional "hothead" mode, charges in to attack Sauron in another dynamic splash page. (There's a nice bit of foreshadowing in the previous issue, in which, via "fastball special," Wolverine kills a gigantic pterodactyl that has grabbed Storm out of the air.) Cyclops warns him not to get too close, but for the time being, no one else on the team knows that Cyclops has faced Sauron before. 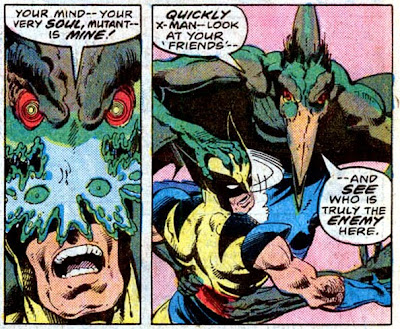 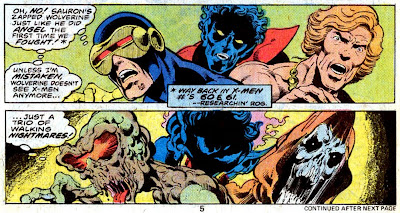 I love that last pair of panels: the heroes transformed into monsters. That's the way the general population is supposed to see the X-Men anyway, right? Looking at them now, I wonder whether there's an inking or coloring mistake in the monster version of Nightcrawler. Maybe it's just supposed to be a creature of creeping shadow? (The highlights between his ears could be eyes, I think.) But hey, I'm not going to say Terry Austin mis-inked Byrne, nor will I blame any influential art directors of The New Yorker for misreading Terry Austin's inks. 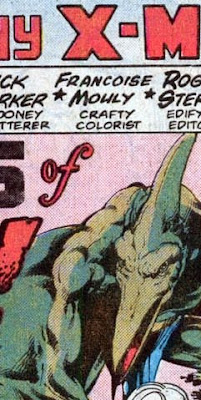 Anyway, there's the sequence I remembered so vividly.

The next thing Cyclops does, in case you're worried, is knock Wolverine unconscious so that the three unhypnotized heroes don't get cut to ribbons.

And young Isaac grows up to be a bit of a nerd.
Posted by Isaac at 11:14 AM No comments: 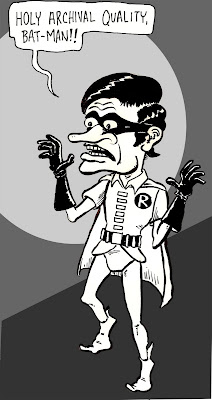 Someone has gone and archived audio for every one of Burt Ward's Robin's "Holy Something!" exclamations from the Batman TV show. Who knew there were so many?

What to say when you meet the knock-off actor, Ted Damson...

Is it still a catchphrase if it becomes predictable? ...

What to say when you start a pilgrimage to the Hyde Park Bar & Grill...

...And of course, the ode to Fredric Wertham.

They're downloadable samples, so get your beatboxes fired up to do some remixology. I want you to get all Art of Noise on this business.

Thanks to our pal Gerry Canavan for the tip.

P.S. I don't mean that doodle to be a caricature of Burt Ward in particular. It's just a grotesque little Robin cosplayer, in a sort of stylistic homage to a Tony Millionaire story I read this weekend.
Posted by Isaac at 2:47 PM 1 comment:

I can guess which of our pages gave the Google a place to land, but clearly this is an issue which we haven't really addressed before, and since I know we have a readership that appreciates comics-history arcana, I'll give a few details.

Some of you may know that in 1971, the year of my birth and the year Jack Kirby moved to DC, shockwaves rocked the zeitgeist of Green Lantern and Green Arrow when it was revealed that Green Arrow's kid sidekick Roy Harper, a.k.a. Speedy, had fallen prey to the seductions of heroin. It's a pretty famous story, and the cover has seen at least a handful of swipes and parodies. (Scroll through all the images in that link on "swipes"; it's worth the time the whole post takes.)

What you may not realize is that DC almost undertook their own twist on this famous cover, at that moment in the early '90s when mutants (and mutagenic serums) were all the rage in comics. Yes, they briefly considered having Roy Harper shoot up with some sort of dragon's-blood mutie-juice that turned him into a double teen. Here's a treatment for the cover of the never-completed story: 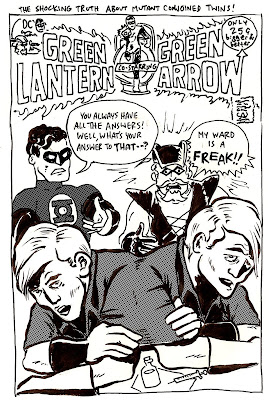 At least, that's my explanation for the Googling this week.

As for Mike, he says,

My initial thought also involved Oliver Queen's ward, but when Isaac sent me a sneak-preview of his contribution I knew I'd better try something else. (I'm fine to post something nearly identical to his work when the similarity is not premeditated but only discovered after the fact of drawing... but since I hadn't drawn anything yet it seemed not quite cricket to duplicate his doubled Speedy and thereby quadruplicate the critter.)

The second and third Speedys I thought of were Señor Gonzales and Wesley Webb West, better known as Speedy West (a name apparently given him by Slim Wilson—the human Slim Wilson, not the Muppet). When an image search turned up a picture of Speedy West wearing a necktie not unlike Speedy Gonzales's neckerchief, I decided to double up on the Speedys by drawing Mr. West's head on Sr. Gonzales's body. So that's what I did. 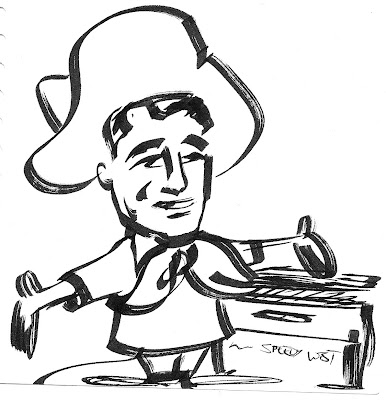 That's Mr. West's pedal steel guitar in the background, of course. Furthermore, in an effort to satisfy the "double speedy" request, I drew this piece PDQ; but you probably didn't need me to tell you that.

...And that's this week's attempt at penance. What will the rest of the week hold? Time will tell.
Posted by Isaac at 5:18 PM 1 comment:

We chose last week's phrase for "Doodle Penance" because of what Mike called its "wonderfully bad French": someone came to the site searching for "comment dessiné une sloth."

And so, this afternoon, when I caught a rare stretch of idle minutes, I decided to practice dessiné-ing une sloth, with these click-to-enlarge results. 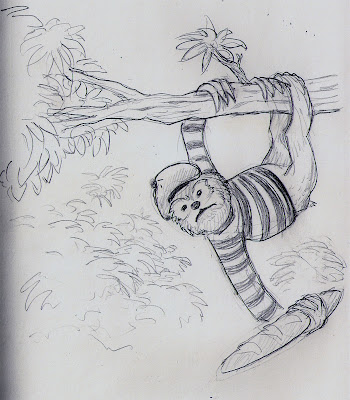 How's that for a paresseux parisien? I drew it without reference images.

My thanks go out to the members of the freshman comics-history class at the Center for Cartoon Studies, who reminded me of the essential iconography of the Frenchy striped shirt. A baguette and a beret might not have been enough to Francofy my folivore.

Stay tuned for this week's Doodle Penance. It'll be speedy...
Posted by Isaac at 10:12 PM No comments: