Animal Alphabet: M is for Moloch

This week's Animal Alphabet entry goes by a few different names. I have a couple of other things I'm considering for T, though, so I won't be calling this a "thorny dragon" or a "thorny devil." Instead, I will give this little lizard its most awesome monicker, which it shares with one of Satan's fallen angels: it's the moloch, also known as Moloch horridus. 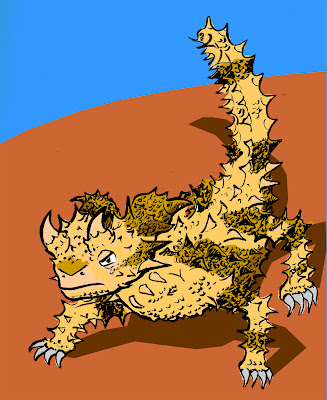 Seriously, I'm sort of a collector of scientific binomials—among my favorites are Gorilla gorilla and Bison bison—and Moloch horridus is about as cool as they get. Extra points for the etymological joke about the word "horrid" (which used to mean something closer to "horripilating," as you know, and seems to refer to the hundreds of thorny spikes sticking out from the moloch's hide).

What my drawing really doesn't capture is the weird jerky gait that the moloch uses, perhaps to confuse predators. For that, you have to refer to a different video or my preliminary doodles for this week. 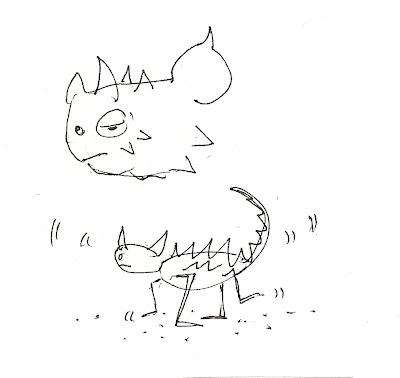 Anyway, I have a couple of creatures in mind for next week, and I'm having trouble choosing between them. Do you have a preference? I have a poll for you; you'll have to click through to vote if you're reading this by RSS.

What critter should I draw for the letter N?

Animal Alphabet: L is for Lungfish

A quick "Animal Alphabet" post this week, mostly because I don't have a lot to say.

You see, in my mental zoo, L has to be for Lungfish. Such has it always been.

Besides, it's been a while since I drew a weird fish. 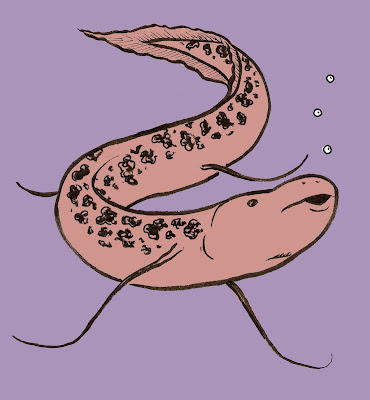 I have always thought these guys are cool, since I was maybe three years old. When their ponds and pools dry up, they can hibernate under the mud, or they can slither off through the air looking for a deeper hole. I think if you grow up knowing about the existence of oddball animals like these, you're much more likely to appreciate Darwin's insights.

I realize that by doing a semi-amphibious fish this week, I'm pretty much robbing myself of "mudskipper" for next week, but I have something else planned (a lizard with an awesome name).
Posted by Isaac at 12:01 AM 2 comments:

Animal Alphabet: K is for Kaka, Kea, and Kakapo

This week's Animal Alphabet entry is a threefer, because I couldn't decide between the three living members of the Strigopidae family. 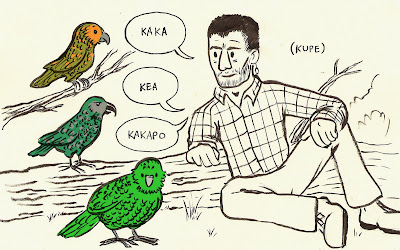 While I was picking a critter for this week's post, I started noticing how many of the iconic animals of Australia and New Zealand start with k. As of the point when I'm writing this, we already have Animal Alphabet entries for the kookaburra and the kiwi, and there's no reason we couldn't see the kangaroo or the koala.

I'm not sure why there are so many K-creatures down under, although I imagine it must have to do with both the prominence of the hard C in the native languages and the historical ascent of K as a way to spell that sound in English, perhaps as part of a general drift away from Latinate spellings for the things of the larger world. (After all, English had names for none of these critters before Captain Cook and Joseph Banks hit the Southern Hemisphere in 1769. That's pretty recent, in terms of the history of the language.)

Anyway, since I had decided to focus on three of the parrots peculiar to New Zealand, and since I can't think of New Zealand without thinking of its greatest cartoonist, I decided to include a local character of his (who also starts with "K") as an appropriate tour guide to the parrots.
Posted by Isaac at 2:10 PM No comments:

Animal Alphabet: J is for Jerboa

This week's "Animal Alphabet" drawing comes with a fragment of a poem by Marianne Moore, one of my favorite poets. 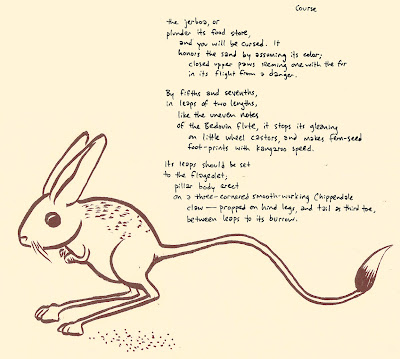 That's the last couple of stanzas of "The Jerboa," because J is for Jerboa. You can click the pic to make the words legible.

If you have any questions about this critter, I refer you to the Moore poem. It starts on p. 10.
Posted by Isaac at 12:53 AM 3 comments: