Animal Alphabet: I is for Isopod

This week's Animal Alphabet entry is not in itself an obscure creature. In fact, I bet you know these guys by one of their several familiar names: the pillbug, the doodlebug, the sowbug, the roly-poly, the woodlouse, the armadillo bug, the chuggypig, the ticklebug...

Let me refer to them by a more general name:

I is for Isopod

They're a common enough critter in the ground-cover and leaf-litter that probably every kid has played with them at some point. They're harmless and interesting, and they behave according to predictable instincts. 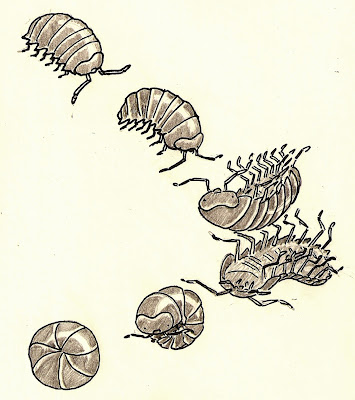 I probably spent hundreds of hours with these guys between ages three and thirteen.

Did you know they're not insects? They've got seven pairs of legs (insects have three) and no wings or winglike structures. In fact, the lowly isopod is a crustacean, more closely related to shrimps, crabs, lobsters, and crawdads than to beetles or even centipedes.

Did you, moreover, know they have closer marine relatives? In fact, there are gigantic marine isopods. (They also live in Lake Baikal.)

These guys do not look quite so harmless. 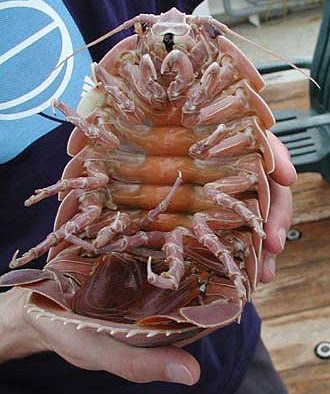 Seriously. They can weigh almost four pounds. No lie.
Posted by Isaac at 11:57 AM No comments: 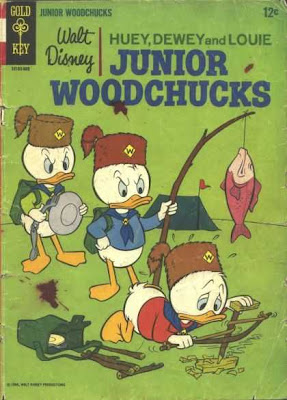 Not that kind of Junior Woodchuck, actually. I have to tag this post "not comics."

I know I have posted backyard wildlife photos before, but I don't think I have mentioned my favorite backyard denizen, whom I have been calling "Charles" since shortly after I moved in here. 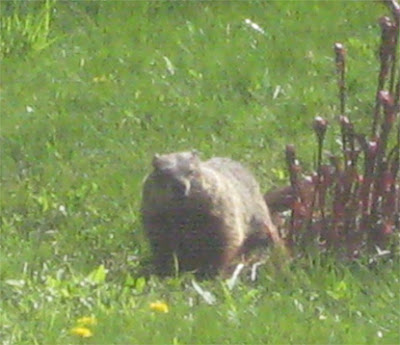 Charles is a burly, surly woodchuck, who is prone to strike a pose not unlike the one found on the local cider label. He's skittish, and I don't have a zoom lens, so I rarely get a good picture of him, but it's good to know he's back there. 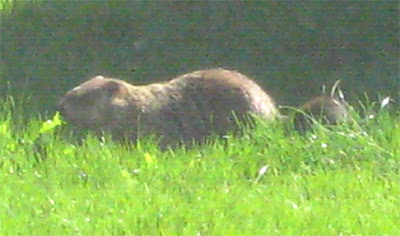 He seems to live under our garden shed. I see him a few times every summer, munching the flora of the back yard.

Well, today I spotted a different specimen of Marmota monax: 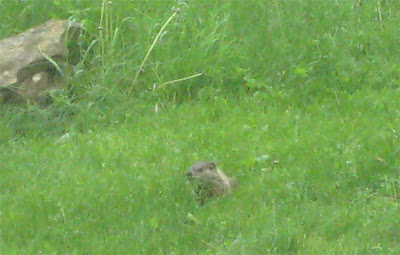 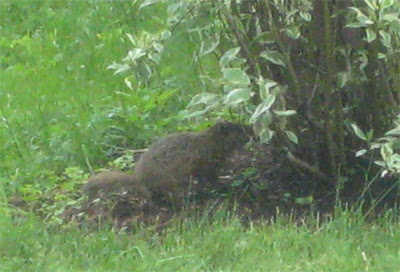 Below, for contrast, see Charles (on a different day) in the shadow of that same shrub: 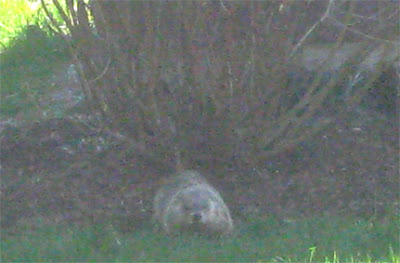 And here is little Chip again: 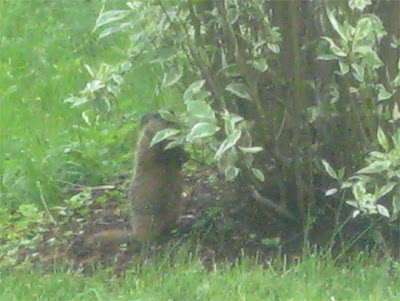 The theory is now that Charles has secretly been a lady all along, and Chip is a new addition to the family. (Woodchucks have their babies in the spring, after the grownups are done hibernating.)

Here is Chip right by the garden shed. He's barely bigger than a squirrel, really. 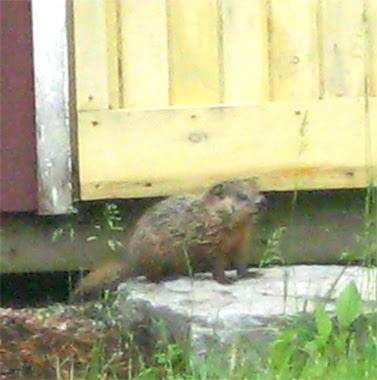 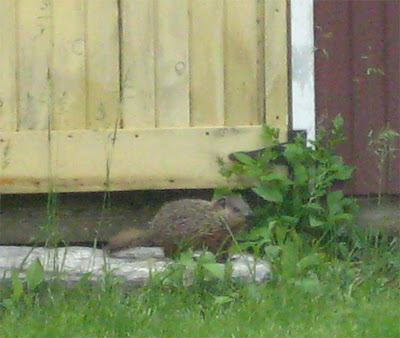 You have to dig Chip's extreme cuteness. 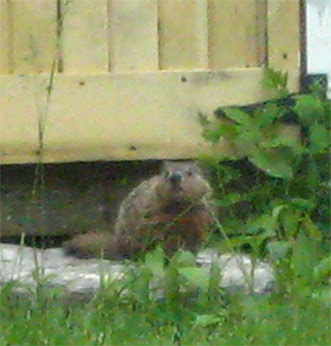 Look at that little face!
Posted by Isaac at 1:06 AM No comments:

Animal Alphabet: H is for Hoatzin

This week's Animal Alphabet drawing is a little scruffy, but I am so out of practice with inking, and I was so pleased with my pencils on this one, that I decided to stick with a rough drawing (plus a spot of color and a few tweaks) so I wouldn't kill it.

For many years, in my mental collection of near-cryptozoological treasures, H has been for Hoatzin. 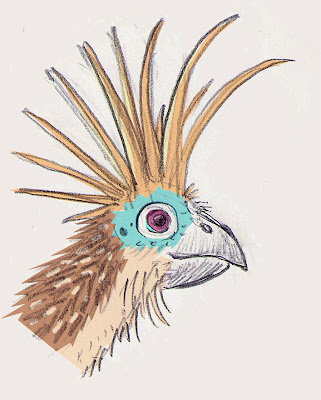 The hoatzin is a South American swamp bird, a majestically bemohawked turkey-goose-pigeon of a thing, an awkward, unwieldy flier because it feeds on leaves (and therefore has heavier fuel tanks than those warblers and wrens that eat more energy-dense meals). Apparently it's also smelly enough to have earned "stinkbird" as an alternate nom de plume. 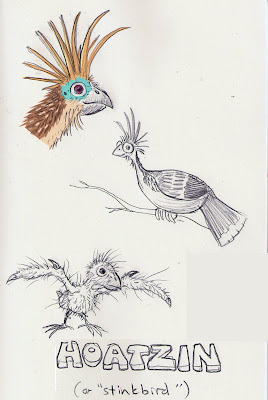 I dig the hairstyle, but the major reason I like the hoatzin is that its chicks have an anatomical anomaly. They are born with small claws—"thumbs" at the wings' last joint and another small "finger" claw at the very point of the wing—that the baby birdies can use to clamber around in the swamp scrub from an early age, before they can fly. (You can see one in action here.) There's a lesson, if you ever needed one, in vertebrate homology.

A few years ago, when I was thinking about writing a sequence of animal-riddle-incantations with obscure answers, I came up with this little rhyme about the hoatzin:

Dragon's feathered mane, or turkey wattle?
Archaeopteryx, or Quetzalcoatl?
(Not much of a singer;
His wing has a finger.)

And really, if you were going to try to split the difference between archaeopteryx and Quetzalcoatl, I'm sure you'd come up with something like the hoatzin. If I could come up with a couple dozen riddles like that, do you think there would be a market for such a book? I figure it'd appeal to a particular sort of nerdling child.

If you do a google image search for "hoatzin chick" you may see a drawing or two in which people seem to have misunderstood the location of the little claws. Let me add my own doodle to that misinformation campaign: 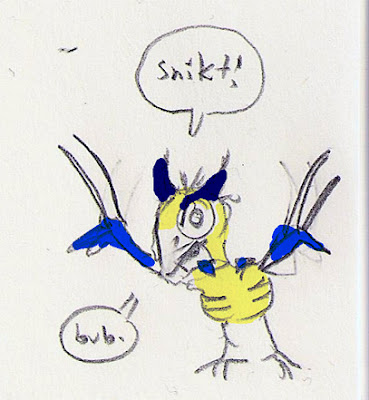 Animal Alphabet: G is for Gerenuk

Well, I got my grades in, but it meant spending all day yesterday marking exams and making calculations. No time to do an extensive post or an elaborate drawing.

This week, G is for gerenuk. 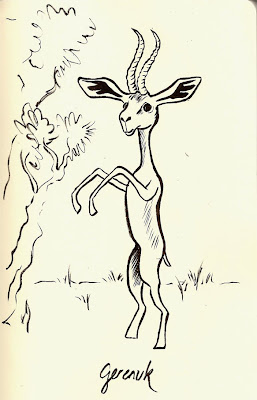 I know next to nothing about these odd-looking antelopes, except that they really are prone to that manlike bipedal posture, and they really have that comically disdainful face. If I had time to do a second-draft drawing, I'd elongate the hind legs, which really don't look very antelopey. Also, I should probably stretch out the neck.
Posted by Isaac at 2:35 PM No comments:

I'm hoping that this will be the last "punt" for me on the Animal Alphabet project. This week, in the midst of grading final papers, I got caught without even a preliminary set of doodles. All I could manage was to pop out a quick brush-pen drawing and put some very quick color on it.

So: F is for frigate bird. 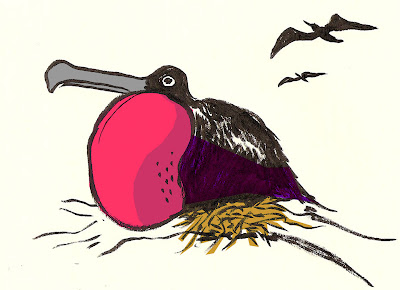 That tomato-colored balloon on the front of that guy is an inflated part of his throat, which is used for display during mating season. If you've never seen one of these guys in action, then you can catch them toward the beginning of this episode of The Life of Birds.

They're not the only birds who can puff up their throats like bullfrogs. You might also want to take a peek at the greater sage grouse, if only for the bizarre wobbly sounds it makes.
Posted by Isaac at 9:39 AM 1 comment:

I'm not sure what happened here. One minute I was sitting at my kitchen table, winding down for the night, and the next minute I had drawn this. 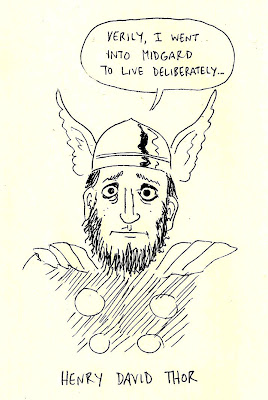 To my credit, the Thor details and the Thoreau details are all from memory, and I think they're more or less persuasive.

Blame the hype for the upcoming movie, or blame the supermassive Walt Simonson Thor Omnibus that I got in the mail the other day.

Good night.
Posted by Isaac at 1:11 AM No comments:

Animal Alphabet: E is for Echidna

The grading hasn't gone away yet, so I'm going to have to punt (more or less) for this week's Animal Alphabet, too. I was planning to do a real drawing, and even started the pencils for it, but they didn't go well, and I ran out of time. I'm going to have to fall back on my preliminary doodles again. 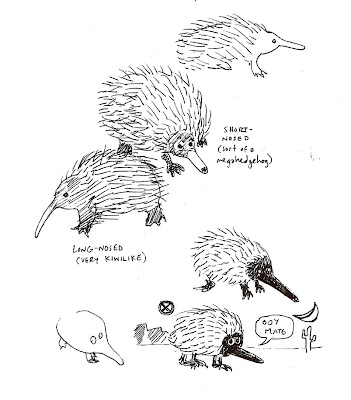 You will probably be more familiar with the platypus than with the echidna, the other monotreme. (Monotremes are the mainly-Australian mammals that lay eggs, though three of the four echidna species live on New Guinea and not Australia.) As you can see, they're spiny little guys, and they come in a few different shapes: 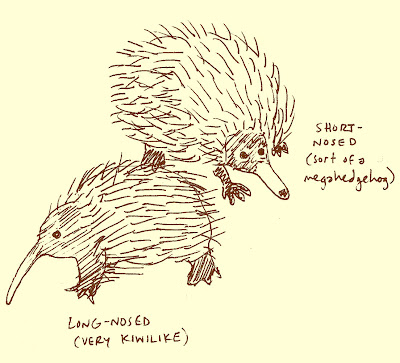 The short-nosed version, as I note above, is a sort of mega-hedgehog in its initial appearance. Of course, if you look at them for more than a split second, it's easy to tell a hedgehog from an echidna, especially the babies, since newly hatched echidnas (which are also called puggles, for all you people busily scribbling Harry Potter doggerel) are unformed little blobby things with nary a hair, unlike baby hedgehogs, which are seriously among the cutest things that nature creates.

Meanwhile, in an example of convergent evolution, the long-nosed echidna really looks sort of like a kiwi. Is kiwilike a word? Is there a kiwilikewiki I can consult for an answer to that question, please?