AlphaBots: P is for Plex

And now in the course of our AlphaBots we come to Robot Number One in my house.

I mean, if you ask my little son who his favorite robot is, he's likely to list Jimmy and R2-D2 (whom he knows from a blinking toy, not having seen Star Wars yet) as well—"favorite" is almost always plural—but his longest-standing robot friendship has to be with Plex. 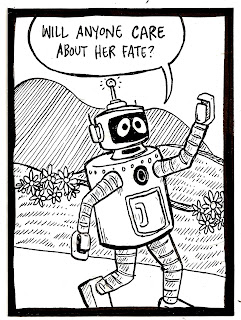 In fact, I'd wager that of all the robots in my alphabet, Plex is the one I have drawn the most frequently. Just this weekend I was challenged to work him into the background of an Aquabats whiteboard mural. I've drawn him in almost ever medium available. 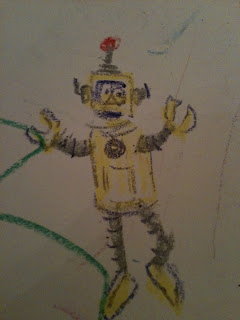 The odd dialogue in my panel above comes from another "dark whisper." Nothing major—just musing about a character I'm creating for a comic you'll hear a lot more about in a couple of weeks.
Posted by Isaac at 1:12 PM 6 comments:

AlphaBots: O is for Omnidroid

I'm running a little late on this week's AlphaBots drawing, and I don't have a whole lot to say about it, except ...

1. Really stylish design looks simple and is difficult to replicate. I wish I could have done a better job with this. I'm still feeling rusty. 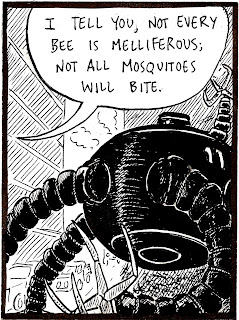 2. I still really enjoy The Incredibles, which I take to be an allegory about middle age and having an uninteresting job that doesn't tap your whole potential. The Omnidroid has almost nothing to do with that reading of the movie, except as its ever-increasing dangerousness becomes a way to push the limits of potential.

3. If I'd been thinking about this a little longer before I started drawing, I might have tried to ape the style of Tom Gauld. But instead this is what you get.

The word of the day at dictionary.com is melliferous.

AlphaBots: N is for Nomad

Hey, I'm caught up on AlphaBots! That was fast. 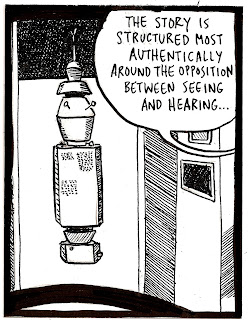 I hope you recognize this little hovering menace. He. Is. Nomad., one of the less convincing bits of mid-twenty-third-century alien (well, semi-alien) technology on the old classic Star Trek show that I love so dearly.

I'm bending one of my rules to include both Nomad and Data in my alphabet. I want every one of my robots to come from a different source, after all. It's possible that some of the same hands were involved in creating both of them, but in my mind Next Generation is really the creation of a different set of writers and thinkers, with different concerns. Nomad shares a universe with Data in only the most nominal sense.

If you object, I could probably come up with another N-bot. But how could I not draw this clunky, inert guy?

The text in this panel comes from another "bibliomantic search," this time of what looks to be a fascinating scholarly study of the apostle Thomas. (Did you realize that the Biblical account actually never says that Thomas touched Jesus's wounds? In fact, it reads as if Thomas is too ashamed at being rebuked by Jesus to go through with his skeptical test.)
Posted by Isaac at 4:15 PM 38 comments:

I'm going to catch up on AlphaBots this week, but I haven't drawn this week's robot yet. Instead, let me give you a member of an inexplicably under-published shape-shifting alchmico-scientific super-robot team, plus an android from a story near to every nerd's heart. 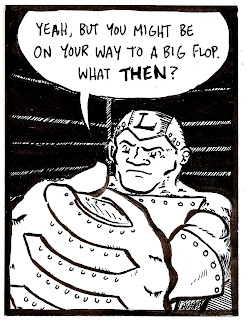 So, first, L is for Lead, the least shiny of the Metal Men. Having thought about this drawing for two weeks didn't make it any better — there's more fun and more energy in some of my preliminary sketches — but it did get me thinking about the special properties of Lead. I wonder: has Lead even concealed something from Superman's x-ray vision? Has he ever formed his finger into a pencil to write a message? Has he ever formed his hands into revolvers and shouted, "Eat lead, copper?" Since he's not the brightest knife in the crayon pack, does Lead have the sort of homophone trouble that haunts modern college students? 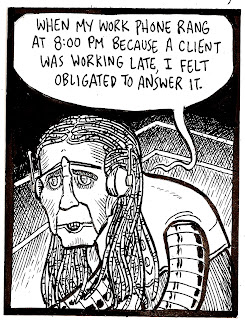 I'm even less happy with this drawing of Marvin, the Paranoid Android. I knew that I didn't want to replicate the movie or TV versions of Marvin, neither of which actually looks very andr-oid. I first encountered Hitchhiker's Guide to the Galaxy as a novel (and then shortly thereafter as a script for a radio show, a radio show itself, and a text-adventure video game), so I had some time to imagine what he looked like before anyone showed him to me. I always sort of mixed Marvin up with Neil from The Young Ones, a show I never really watched (we had no cable and thus no MTV) but heard quoted and described to me an awful lot over the phone.

Alas, my skills of robo-caricature aren't up to the challenge. Clearly I'm rusty; the only solution is to draw more.

Oh, here are those sketches of Lead that I liked better than my finished panel: 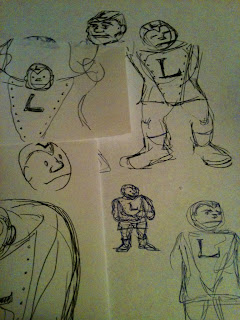 Dialogue in these panels is "dark whisper" and "bibliomantic search" (an alumni magazine that happened to be on the table).