Animal Alphabet: D is for Dobsonfly

I could have predicted this would happen. I'm so swamped with grading this week that I pretty much have to punt on the Animal Alphabet. Before I could even properly decide between dung beetle and dobsonfly, the deadline is passing...

Fortunately, I have a preliminary sketch-doodle that I can post.

A dobsonfly, in case you don't know, is what a hellgrammite grows up into. The thing that's missing from the preliminary sketch is a sense of scale: for insects, dobsonflies are large, and those pincers the males have are pretty impressive.

And as I was scanning that doodle, I thought, "Where have I seen that before?"

It turns out that my notebook for Spring 1996, early in my grad-school days, is full of drawings of dobsonflies and hellgrammites.

I was working on a poem then, eventually drafted too much under the influence of Hart Crane I think, about water insects. 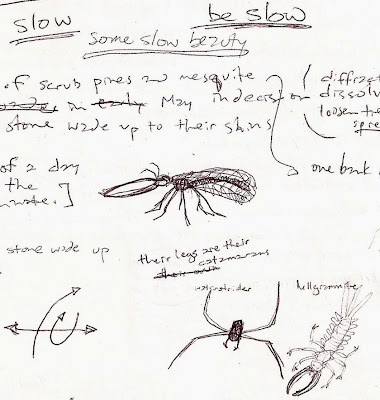 The diagram of the three arrows represented the three worlds I wanted to describe: the water-strider's transit across the surface of the pond, the metamorphosis of insects like the hellgrammite and the dragonfly, and the hand of the human collector passing down into the underwater world. Or at least that's how I read it now, fifteen years later. 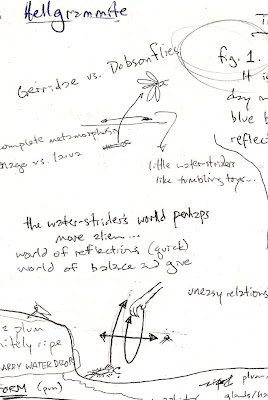 Like most of my old creative efforts, it's a little embarrassing to look at: yet another old failure. But maybe there's something I could learn from those fifteen-year-old notebooks (scribbled by a twenty-four-year-old) if I had a little more tranquillity in which to recollect them. Today, however, I'm back to the grading piles. Poetry (and drawing) is for another day.
Posted by Isaac at 12:49 PM 4 comments:

Animal Alphabet: C is for Coati

For this week's entry in the Animal Alphabet, I picked out a creature I knew by another name.

Did you know there's actually no such thing as a coatimundi? Apparently people at some stage were confused by the differing habits of the solitary male and the extremely social female, and construed them as belonging to separate species; really, they're all coatis.

I plan to take my correction in stride. In fact, I've been happy to discover that the gangs formed by mama coatis and their kits are super cute. You should see them in the BBC Life episode about mammals: super cute, I say. (And, like many social animals, they can apparently be raised by people as pets.)

Anyway, C is for COATI. 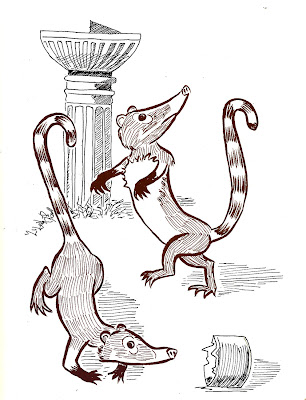 Do you recognize what I'm swiping there? Do you want a prize for recognizing it, or just bonus points?

Animal Alphabet: B is for Birds of Paradise

MY POKEMANS. LET ME SHOW YOU THEM. 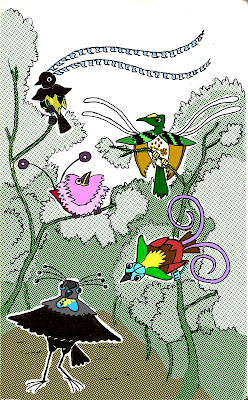 For this week's letter in the Animal Alphabet, I give you five of the most peculiarly adorned creatures in the animal kingdom, all close relatives from the islands of New Guinea. From top to bottom, they are:

The King of Saxony Bird of Paradise

The King Bird of Paradise

Although they are a trip to draw and a marvel of color, the best way to see the birds of paradise is in action, so I encourage you to check the video links I've put behind their names. If you've never seen them before, there's a decent chance your mind will be blown.
Posted by Isaac at 5:45 PM 1 comment:

Animal Alphabet: A is for Anglerfish

Leave it to our cartoonist pal Ben Towle to light a fire under me and get me posting here on the blog again. Today he announced a new project that he and Rob Ullman are undertaking, to post weekly alphabetical animal cartoons. (Ben did an alpaca today, and Rob did an aardvark.) 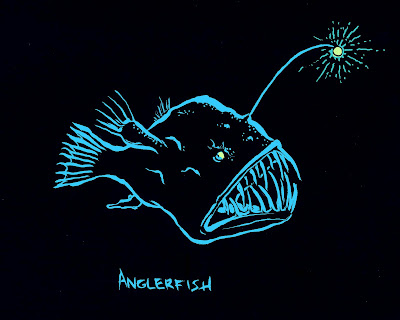 Her tail's like a comb, and her teeth are a tangle;
She married a leech who does little but dangle;
She's a fish with a lure, and she'll teach you to angle.

If you don't know about the marital habits of the male anglerfish, you may not believe your eyes.