I've been thinking about the landscape in George Herriman's Krazy Kat for the past few days. In particular, I've been thinking about the effects generated by the protean backgrounds—the mesas that turn into weird-looking trees, the melon-rind moon that appears and disappears, and so forth. Kokonino County is famously unstable, and Herriman's background doodles are one of my favorite things about the strip. (Also among my favorite things: the characters, the writing, and the concept. There is nothing about Krazy Kat that I do not love, except for its finitude.)

I have also been thinking that although Kokonino does not present a stable mien, it does have features: places that the characters (who never comment on the shifting scenery) recognize and can easily find. There's the Old Smoke Tree, for example, or the Enchanted Mesa of Joe Stork. And there's the Elephant's Legs. 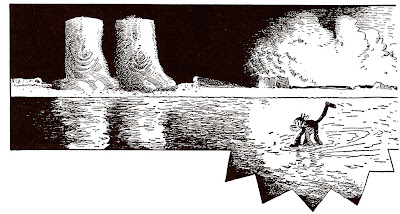 That's an image from 8 July 1923. Krazy is walking on stilts amid the waters of Red Lake, and the Elephant's Legs are there on the shore. 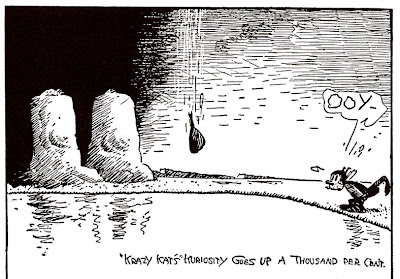 Here they are again, one week earlier, by the side of the selfsame lake. 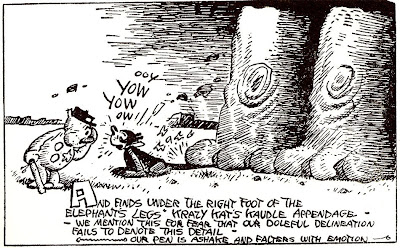 Don't worry. She (or he) gets loose when Ignatz squeaks nearby and the legs jump up in fear. And here they are, meandering with clouds in the shape of an elephant's rump and haunches above them, in the throwaway central panel from 20 September 1925: 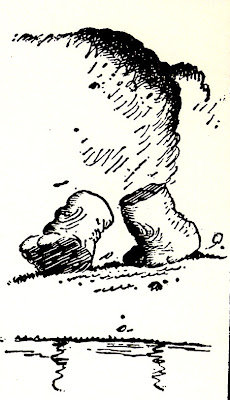 Maybe that's how all of the Kokonino landscape features get around.

I had always assumed that the Elephant's Legs were a flight of Herriman's fancy, but it turns out that, like the Mittens (which also appear repeatedly in Krazy's backgrounds), they're a real geological feature in our real Arizona, near Tonalea, in the northern part of the state, on the Navajo Trail. (The actual formation is called The Elephant's Feet, and there's a rest stop nearby that Google Maps will hit. Pull back far enough on that map, and you'll see the names of Shonto, Kaibab, Kayenta, and Kaibito, all of which also feature in Krazy Kat regularly.)

In fact, you can see the Elephant's Feet with Google Street View: 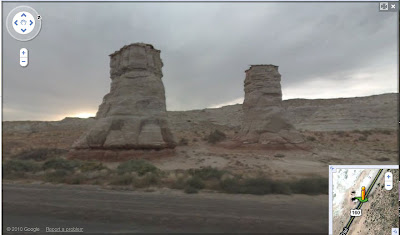