I think this week's AlphaBots selection will turn out to be pretty popular. There aren't a lot of robots that start with I, and this one is pretty fun to draw.

As far as I knew before I started work on this, IG-88 was just one of a lineup of bounty hunters, like Zuckuss or Bossk, who looked cool but never got a line in Empire Strikes Back: set dressing in the movies; awesome extras in my action-figure collection. 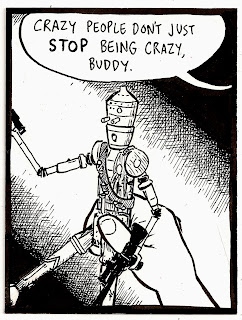 Actually, I never had the Zuckuss figure, and the IG-88 figure was especially lame — I've drawn him with much more bendable arms than the ones I remember. But what a strange sight he was, with that pope-chapeau head and those pipey limbs.

I should have known that, like so many elements in the extended Star Wars universe, IG-88 has a complicated backstory available only to the cognoscenti. He also, apparently, has a night life:


Give that video a couple of minutes. It starts slowly, but around 2:00 it starts to get pretty fun.

As for the dialogue this week, well, I rolled "dark whisper," and that's all I need to say.
Posted by Isaac at 5:25 PM No comments:

I went back and forth a little bit about which robot to draw for this week's AlphaBots. In fact, I may still cook up another drawing, but probably not today.

My original idea started to seem daunting to me when I thought about how much geometry would be involved in any decent drawing of HAL 9000 (from 2001: a Space Odyssey): either a bunch of perspective for the memory-core room or a bunch of concentric circles in HAL's iconic camera eye.

And then I found my drawing compass, tucked away in a box under a few months' worth of books. 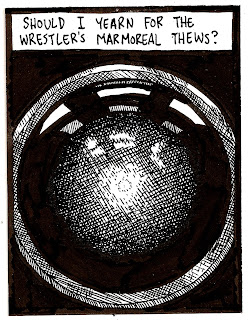 Have I mentioned that I find cross-hatching sort of therapeutic?

As for the text in the caption: well, marmoreal was the word of the day for my dictionary app today. I've used it in a poem before, describing the "horned / marmoreal scorn" of Michelangelo's Moses — the poem's in this issue of Hayden's Ferry Review, but it's not the poem you can read for free on their site — but I decided to go in a different direction when pairing marmoreal with some contrasting words. I was sort of thinking about HAL's lack of a humanoid body.
Posted by Isaac at 12:37 PM 5 comments:

In a moment of inspiration I picked up The Nao of Brown, which impressed me mightily when I read it last year. "There are giant robots in Ichi, right? There are robots somewhere in that book." Indeed, they're in there, though they really only appear on one page.

Of course they fell in an awkward spot in the Alphabot alphabet, as I've already drawn one robot for G. 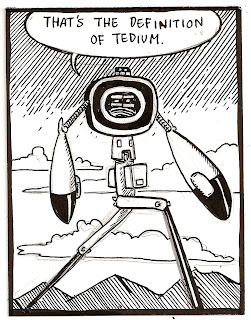 But the design of these robots is so interesting—fluid and blocky, impressive and fragile, deliberate and doodly—that I thought I'd take a quick crack at it after everyone else in the house was asleep.

The dialogue comes from a recent tweet by Nick Abadzis, for no reason other than chance.
Posted by Isaac at 12:34 AM No comments:

Did you think I'd given up on "Draw Two Panels"?

Oh, I'm still doing the project. Or is it a process, not a project, since I don't have a terminus in mind?

Anyway, I got stymied, because of a bad first attempt at this strip (I mean, a worse attempt; this set of results is still pretty bad) and because a note that Winter left on one of the other posts made me self-conscious about my plans for this strip.

Well, after much deliberation and a bit of clunky drawering, here it is. 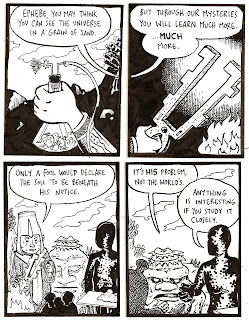 Hopefully I'll be back in the saddle in a few days.
Posted by Isaac at 11:38 AM 2 comments:

AlphaBots: G is for Gort

This week's AlphaBots drawing is not some old sentimental favorite. 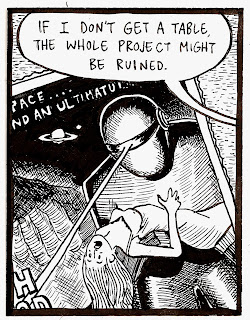 In fact, although I am sure I will lose some nerd cred by admitting this, I've never watched The Day the Earth Stood Still. I'd like to one day, but it's not at the top of my queue.

I've borrowed this drawing of Gort, the massive robot that accompanies Klaatu on his mission to Earth, from the movie poster, which in turn I've taken from a cool book of Classic Science-Fiction Movie Poster postcards that Dover publishes.

I've said before that I think robots are always fun to draw, but Gort (who was mostly a mask on a fairly featureless foam-rubber suit) lacks a lot of the gears and widgets that make technology (and robots) doodleable. Still, I'm sure the past century of science fiction would have looked and felt different without him.

As for the dialogue? Well, I rolled "dark whisper" again, and I know the main anxiety I'm having today is still fallout from the SPX uncertainty yesterday.
Posted by Isaac at 10:24 AM No comments:

AlphaBots: F is for Flexo

Looking over my AlphaBots so far, you might wonder why I didn't draw Bender, one of my favorite robots, back when we were on the letter B. Part of the answer has to do with the fact that I want my twenty-six robots to come from twenty-six discrete sources, and Futurama has a lot of robots to choose from.

But the fact is that as much as I like Bender, I like his goateed doppelgänger Flexo even more. 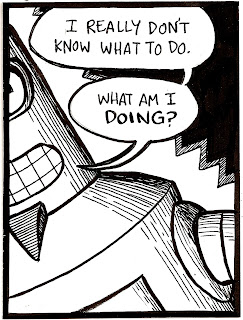 The joke about Flexo is that because he's a duplicate of Bender with a goatee added, everyone expects him to be Bender's evil twin. As it turns out, however, although Flexo is prone to japes and sarcasm, he's basically a nice fellow, and our pal Bender is the evil one.

As for the random dialogue this week. Well, I rolled "worry/trouble/dark whisper." Frankly, it was a bad day for the dice to take that turn. I have been full of worries lately. I'm sure Flexo would console me if he were here.
Posted by Isaac at 6:53 PM No comments:

I Gave Myself Too Many Chairs to Draw 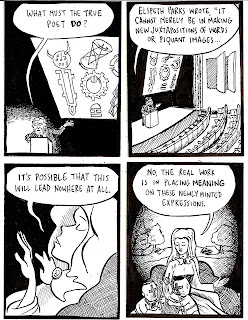 I like the two "drawn" panels (the ones that have appeared previously) enough that I am loath to remove either of them from the deck, even though I could certainly discard either of them now. The warning by "Elspeth Parks" was one of the very first random cards I created for the deck, and I feel like it's trying to tell me that this process has its own built-in pitfalls.

Maybe I'll just keep all four panels from this strip still in the deck.
Posted by Isaac at 10:04 PM 1 comment:

Today's "Draw Two Panels" strip introduces not one but two of the robots I have drawn for Alphabots. I suppose that was likely to happen eventually. 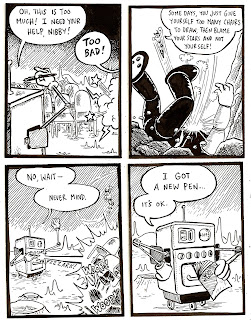 It was fun to draw the Cooker again, though putting him into a panel automatically raises the question of perspective in a way that I have to admit I find a little awkward. (I'm not drawing these things in a space where I can get out a big ruler, and the original paper is only 4" by 3", so it's hard to be scientific about linear perspective. Hopefully the way I'm fudging it more or less works.)

Anyway, there are more of these coming up this week.
Posted by Isaac at 10:17 PM No comments:

No new comics today, because I was drawing for a secret project instead of doing "Draw Two Panels."

Instead, a couple of cool stamps that arrived from New Zealand: 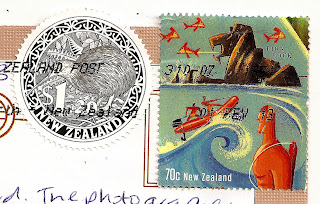 The real geological formation does look a bit like Patience or Fortitude.

And you know how I love those New Zealand birds, kiwilike or no.
Posted by Isaac at 10:20 PM No comments:

I Guess That Counts as a Background 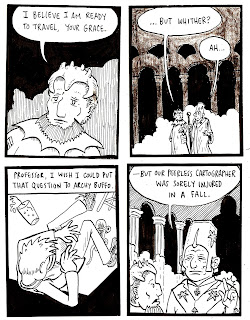 There's some decent cartooning in a couple of those panels.

I was trying a new method of shading in that second panel, but I think I'd better stick to cross-hatching. It might be possible for long practice to improve that method, but I don't think it's worth it—there's a sort of fundamental conflict between the super-smooth surface of the bristol board and the crayon's preference for tooth and texture.
Posted by Isaac at 10:08 PM 3 comments:

They're Sort of a Fantastic Four, I Guess

Okay, another of those random deck-driven strips. 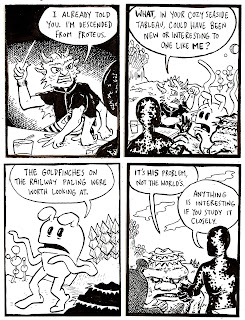 Maybe it was a bad decision to take foreground elements from both of the deck panels and depict them as characters. Getting four monsters into panel #2 meant crowding it up kind of a lot. (These panels aren't a good shape for crowds.)

I'll be a little sorry to see the four-armed sea-monster dude leave the deck: I really like his face. On the other hand, I am finally getting to discard the line about the goldfinches that I swiped, perhaps unwisely, from a Patrick Kavanagh poem.

This week's AlphaBots drawing isn't a robot I'm especially fond of, though I do like the moment or scene that I've chosen for the illustration. I mean, don't get me wrong, I like RoboCop 2 as much as I like any of Frank Miller's other forays into film, but that's some pretty faint praise.

The ED-209 is an advanced police robot, designed (if I recall correctly) to build on RoboCop's success and replace the titular hero with a newer and less maverick model. (Update: I did not recall correctly. As my ED-209-drawing brother-in-Alphabots Sam Wolk reminds me, the ED-209 was a precursor to the RoboCop technology, and was visible in the first RoboCop movie, though I totally remember it from the sequel.)

But ED still has some programming glitches and design kinks to be worked out. (If you haven't seen RoboCop 2, please be aware that the clips I just linked to have some over-the-top violence.) 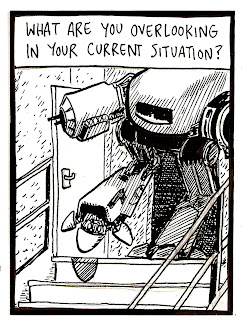 Anyway, ED-209 is not so good at descending a staircase. I really like the gingerly way it tries to position its chicken foot on the stairs; full props to its stop-motion animator, Phil Tippett.

The text caption for this panel came from a randomly chosen page in the nearest book to hand, the dopey pop-psych creativity manual that comes with the Ball of Whacks toy. Next time, I'll make sure a better book is nearby before I roll the die.
Posted by Isaac at 11:58 PM 2 comments:

Bowie, Pee-Wee, and Dick Van Dyke Walk Into a Bar

The panels that came out of the deck for this strip are in the least common "legal" configuration: 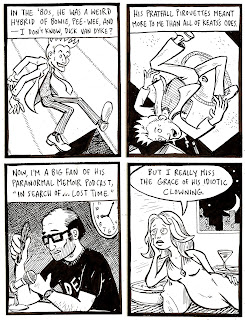 If you look at the rules or guidelines for "Draw Two Panels," you'll see that it's possible to deal the panels into slots #2 and #3, instead of having them separated by a single panel.

My idea for the legal arrangements is this: the strip will go into more interesting territory if the newly-drawn panels don't merely happen in between the panels that come from the deck, but they will be more constrained by the deck panels if you get no more than one new panel in a row.

If no more than one new panel can appear in a row consecutively, and the dealt cards must appear in the order they're dealt, there are only three ways to fit them into a four-panel strip.

Of course, these are only my principles or guidelines. If you're playing "Draw Two Panels" yourself, you can make your own decisions about your constraints.
Posted by Isaac at 10:00 PM 3 comments: