This week's "doodle penance" comes courtesy of a googly-searcher who spent no seconds at all on the site, after having looked for "werewolf the apocalypse comics panels."

When I saw this search term, I knew right away what the googler was looking for, and I regretted not having posted my notes earlier. You see, some recent panels at the MLA Convention have been shooting for a wider demographic, and one that I attended back in Chicago had a decidedly eclectic blend of speakers.

Featured in a discussion of "The Hands of Death: (Re)Membering, Manu/mission, and the Ends of the Digital Age" were three true luminaries. First, our former Yale colleague Matthew Giancarlo, whose lycanthropy was in full evidence because of the phase of the moon; second, Obsidian 20-Jaguar, the physical embodiment of the looming Aztec apocalypse of 2012; third and finally, the cartoon version of Scott McCloud. (The real Scott McCloud was unavailable.)

Like Charles Hatfield and Tom Motley, Mike and I are both incorrigible conference doodlers. Fortunately, this means that my old notebook had a little sketch of this immortal panel discussion, which has gone curiously unnoticed in other accounts of the conference. 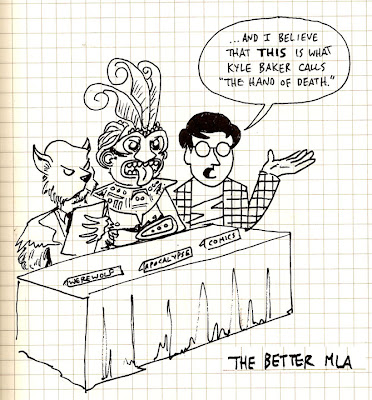 You'll notice that Cartoon McCloud is citing a piece of theory articulated by Kyle Baker. Baker describes the palm-up, hand-extended gesture of elucidation—what Joe Matt calls "the explainin' hand"—as one of cartooning's great sins: an "enemy of all cartooning." I know I've been guilty of using it a time or two. Baker says, about this "Hand of Death," that it's an unnatural gesture, and that it's lazy cartooning. I basically agree with the second assertion—there's almost always a better way to make exposition more interesting—but by now I have seen that gesture (and drawn it) enough times that I do find myself making it on occasion. So I'm not sure that I'll be able to declare it completely off-limits in my cartooning. But I can try to avoid it. There's a new rule for a New Year: one pair of feet on each page, and no more Hands of Death.

You can find this advice from Kyle Baker, and lots of other helpful tips, in How to Draw Stupid. 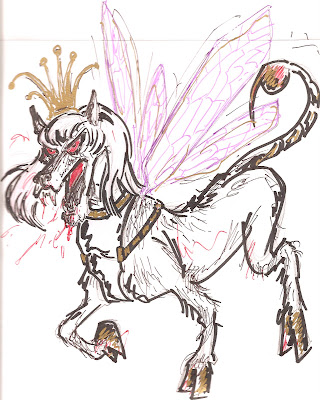 Naturally, this is a drawing of a "tribulation locust" as described in the Werewolf version of the New Testament book of the Apocalypse of St. John, chapter 9. You may be familiar with the regular human version of the text, which begins thus in the Douay-Rheims translation:

The Werewolf version is similar, but there are some slight but telling differences. I have indicated these in boldface in the following extract (a continuation from chapter 9, the description proper of the tribulation locusts):

Incidentally, when it comes to How to Draw Stupid, observe that I have included one and a half pairs of feet in this doodle. I appear to have forgotten that even tribulation locusts have two hind legs. I'm a marked man now!

I should also give credit to Dan Clowes for inspiring me with his far more awesome drawing of a non-lycanthropic tribulation locust, as printed in his nonfiction comic "A Preview of the Coming Apocalypse." This brief but essential guide was unaccountably omitted from Twentieth Century Eightball,

but it may be found in Clowes's earlier collection Lout Rampage! 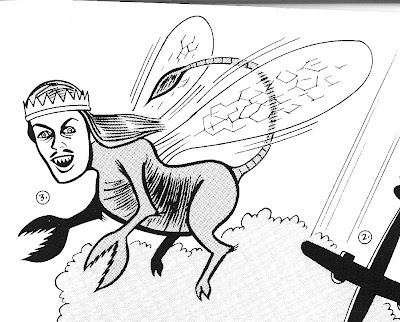 By the way, that's not foliage in the background there: it's the top of a mushroom cloud. Apocalypse, folks!
Posted by Isaac at 12:51 PM

Ah, ta' hell with Kyle Baker; there's nothing wrong with the "explaining hand" I say! I consider it to be now part of the formal language of the art form--just like those asterisk things over Andy Capp's head means he's drunk. Also, people actually do that when they explain stuff. Here's a recent and egregious "hand of death" from me:

I believe that "Werewolf: The Apocalypse" is a tabletop RPG by White Wolf. Mike's abomination looks like it could come from another one of WW's series, "Changeling".

Yeah, um, part of the deal with these posts is that Mike and I sort of willfully pretend not to know what the searcher was looking for ...

In this case, I did some Googling about "Werewolf: the Apocalypse," satisfied my curiosity, then deliberately ignored what I had found out, in favor of something goofier.

Who's pretending? This is honestly the first I've ever heard of that RPG.

Mind you, the Werewolf version of the Bible is real...