This week's "Doodle Penance" starts with a single word: "Zakuzaharra."

I was surprised when I saw it, because I hadn't remembered the brief conversation we'd had in the comments section about the names of the characters in that cool postcard of figures from Basque folklore. Turns out my former student John had inadvertently made us a target for anyone searching for Zakuzaharra information.

Well, here he is, to remind you: Zakuzaharra. 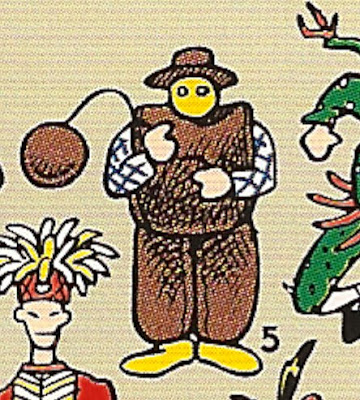 I'm not expert on Basque folklore, so before I started my doodle, I did a little digging. As near as I can tell from this page, Zakuzaharra is a festival figure from Lesaka, a little village in Navarre. He seems to be performed by multiple people at once—on this page you can see a few people dressed as Zakuzaharra—and he seems somehow to embody the bad vibes and problems of the people in the town. He carries a balloon or bladder on a string, with which (I think) he hits people. 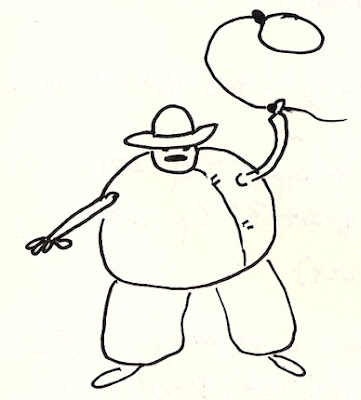 That's about as far as my knowledge of Zakuzaharra extends. But I figured from that much research, I could do a doodle: 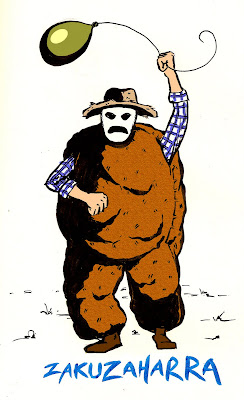 One of the things that I found visually interesting about the costume is that the stuffed burlap bag that makes up Zakuzaharra's legs and torso doesn't cover his arms, so you can wind up with this shambling fat hulk with skinny human arms. I tried to play that up in my drawing.

As for the balloon or bladder, I'd like to know more:

Why does he hit people with it?

How does he choose his victims?

What does it feel like to get hit with it? 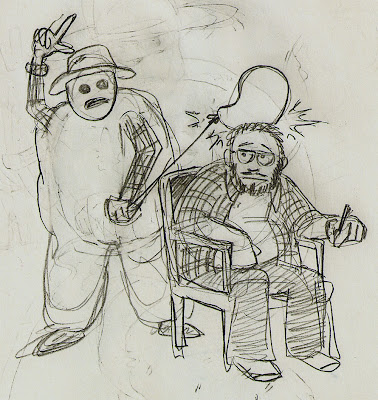 Once again I was moved not to create a doodle per se (by making marks on a surface) but to build up a cartoony image in another medium. This time I have used the most plentiful medium available in Washington, DC, these days: snow. 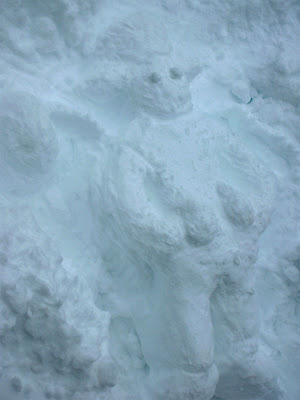 It may be a bit hard to make out the outlines of this figure—mostly because, well, it doesn't really have "lines" as such—but it's a fairly close rendering, in snow, of the cartoon image from that awesome Basque folklore postcard. At least, it's as close as I could manage. Here's a close-up of his sheyn ponem (or should that be shney ponem?): 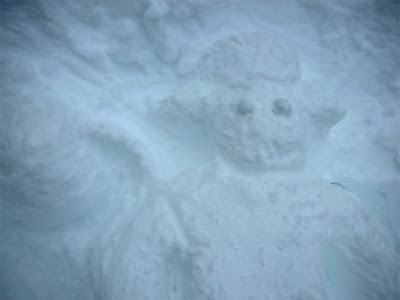 And thus our blog becomes the primary English-language internet resource for information about a festival figure from a little village in the Pyrenees. Please, if you read this entry and know more about Zakuzaharra than we do, fill us in!
Posted by Isaac at 8:54 PM

And so begins my fifteen minutes. . .