The One-Panel Critics: the Vanity of Swamp Thing

It's been nearly a month since my last measly post, and I don't think I'm going to break any postyness records for July, either. But here's a little something I noticed recently.

I've been re-reading my old Swamp Thing paperbacks, thinking about the storytelling as well as the story there, and I noticed a couple of panels from the slow build at the end of Saga of the Swamp Thing #30 ("A Halo of Flies") that I hadn't paid attention to before. Probably I had skipped past these quickly because they're pantomime (there's no text to read), which is a shame, because they build up to an awfully strong final-page reveal—one that anticipates the rug-jerking surprise at the end of the eleventh issue of Watchmen, in its small way.

Here are those panels I mentioned. 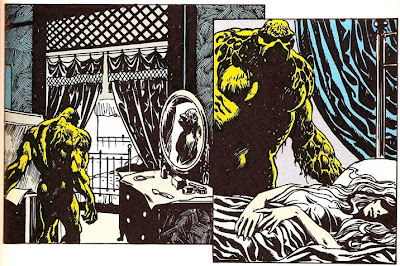 Maybe you're already seeing what I saw.

Even if you're not an avid Swamp Thingophile, you may be familiar with Bernie Wrightson's cover to House of Secrets #92, which included the first Swamp Thing story: 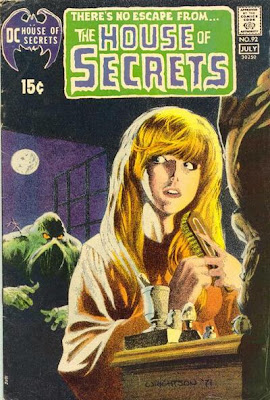 (This image borrowed from the Grand Comics Database, like the next image.)

This story was later reprinted, with a new framing tale around it, in Saga of the Swamp Thing #33, with John Totleben providing a cover swipe or homage from Wrightson's original—with the post-Alec-Holland Swamp Thing's sweetheart, Abby Cable, in the place of Linda Olsen. 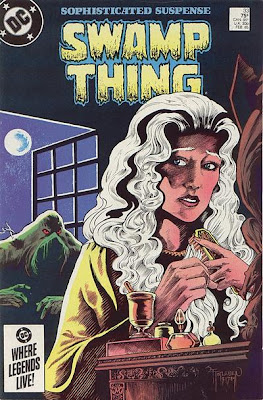 By now you've probably figured out what I've noticed: the elaborate vanity setup that the silent swamp monster stalks past on his way to Abby's curtained four-poster bed. 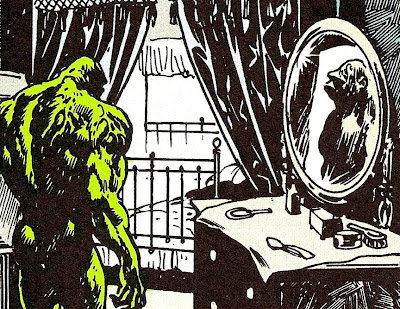 My hunch is that this is an earlier homage to House of Secrets 92. Maybe Steve Bissette will correct me if I'm wrong about this, but I think it's deliberate.

As he looms through the house, Swamp Thing is framed to look like a monster, even though he's the hero of the tale, and the "cinematics" of the scene help to build a really nice sense of foreboding that the chapter's conclusion pays out in spades. It's a nice touch—and a subtle thing to notice more than two decades after the comic was originally published.
Posted by Isaac at 11:03 PM

Wow, good eye! I'll have to go through my HOS #92 and see if that vanity is depicted more completely in the story itself and then compare to those later panels.

A bit of trivia you probably already know: Wrightson's model for that HOS cover was Louise Simonson.

I just noticed that the vanity also appears in the previous issue (SOST #29, "Love and Death"), and that the mirror on the vanity reveals early on that Matt Cable is a lot more dead than he appears.