I really had a lot of fun at this year's SPX. In fact, it might have been more fun than any other small-press show I've been to. As I said yesterday, I got to catch up with a few old friends, and I think I also met a few people who will turn out to be kindred spirits and fellow travelers. I'm planning to savor the books I bring home from Bethesda, and to write about them here on the blog gradually for a few weeks (or as long as it takes). 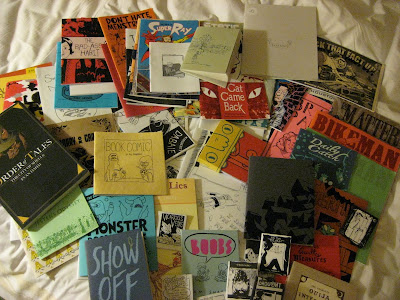 (That's just my haul from today; none of those books are in the picture from last night's report.)

Early this afternoon I was on a panel with Marc Singer and Bill Kartalopoulos that went really well, I think. I was interested to compare Marc's experiences teaching the graphic novel with my own. His class was obviously different from mine in some respects—he doesn't seem to share my misgivings about teaching Watchmen, for example, and maybe in the future I'll bring it back into the reading list—but I got the feeling that we have dealt with many similar troubles and rewards. 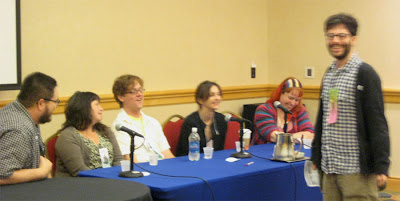 (Here we all are, laughing with Bill K. just before the panel started.)

I also think the panelists were able to say a few really insightful things about autobiographical writing, particularly about the way that a cartoonist (or any writer) has to structure his or her life in order to make it into a story—the necessary manipulations of a story that's emotionally "honest" even if it's not faithful to every concrete fact.

I remember Vanessa saying, for example, that she used to worry about making sure that she drew everyone in her autobio comics wearing the clothes they were actually wearing when the events happened, but that now she's willing to combine two different people into one character in order to make a scene work better.

(Here, I appear to be trying to make some point that Gabrielle and Sarah are skeptical about. Or it's possible that Jesse has just said something under his breath to make them laugh.)

Even more than it was insightful, however, the panel was a lot of fun. Jesse might have downed a snootful (at least) before the panel began, and he was a little rambunctious, but in a way that mostly kept the rest of us looking alive. We laughed a lot, and so did the audience, and I think each of the panelists made a few new fans that day. 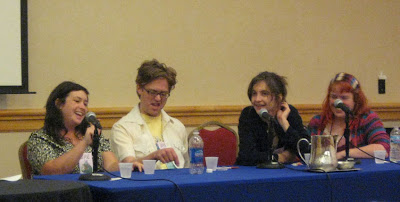 (If you haven't seen Vanessa's latest book, Make Me a Woman, I can tell you it looks gorgeous and loaded with fun. Drawn & Quarterly had early copies of it at SPX.)

Thanks to my friend and colleague Glynnis Fawkes for taking pictures during the panel!
Posted by Isaac at 11:43 PM