Animal Alphabet: O is for Olm

This week's entry in the Animal Alphabet is the olm.

It's not the first salamander we've seen in the alphabet: Meredith Randazzo did a mudpuppy, Lupi did an axolotl, and just last week Andrew Neal did a newt. But I'd bet that this salamander might be the strangest.

I wouldn't be surprised if you haven't heard of it. It's a very rare creature, and its habitat is confined to the caves of the Dinaric karst (on the Balkan peninsula). By the people of Slovenia, it is called "the human fish," on account of its coloration, which is really a lot like waterlogged caucasian human flesh.

It also had a reputation, back in the old days, for being a newly hatched dragon. So I guess that's the second one of those that I've drawn. 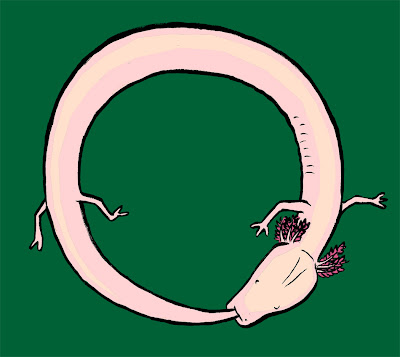 As you can see, what we have here is not just an olm, but an olm ouroboros.

It's my second nearly transparent underwater critter in a row, and I'm really not having a lot of luck coloring them in Photoshop. But I couldn't say no to the olm.

I've actually been working on a poem about the olm and its ecologically threatened position; in the poem I call the olm "the eft of the fontanelle" and play off of the fact that it belongs to the Proteus family. There's more, but I can't publish the poem here because I am still trying to find a print venue for it. One factoid that didn't make it into the poem is that olms, extremely long-lived on account of their very slow metabolisms, can survive for many years (at least six, some sources say ten) without a meal.

Here is some ARKive video of the olm so you can see that serpentine little body in motion.

I had originally planned, as you can see, a more naturalistic pose for my olm. 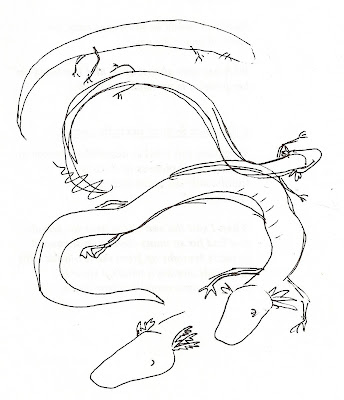 Eventually I settled on the ouroboros image when I saw that this week's Woot t-shirt derby is on the theme of "Things that Begin with O." If you've ever bought anything from Woot, you can vote for the olm behind this link.

It looks pretty good on a t-shirt, don't you think? 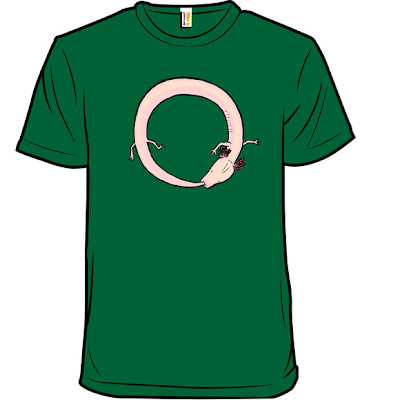 I'm glad you both like it. The olm is one of my favorite critters, in part because its name is so short! How many really obscure three-letter words are there?

Next week: something scaly.

I have a very good idea of what your P critter is going to be. ("P" in this case also stands for poem, n'est-ce pas?) I can only imagine how hungry your poor O olm ouroboros must be to start nibbling on itself, given those metabolic feats you describe...

Wow, this is great! Your olm is really adorable. I kind of just want to wear him as a bangle or something...