It's time for the next alphabet! As promised, this 26-week project—"Alphabeasts"—will feature imaginary animals, not actual ones like the last alphabet. With that in mind, I have drawn an anurid for the letter A. 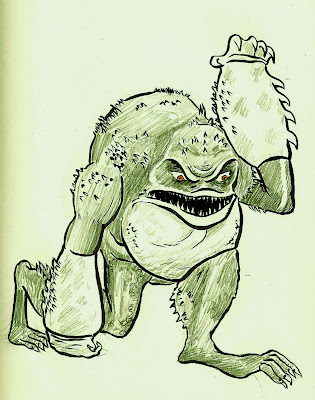 You don't need to feel bad for not having heard of the anurid. In fact, I'd never heard of them until I started doing my research and planning the complex logic problem that will be my Alphabeasts alphabet. Let me explain.

No, there is too much. Let me sum up.

1. Each Monday, a new imaginary beast for a new letter of the alphabet. "Beast" means it's a creature, not a person: so "Kryptonian Thought-Beast" is okay, but "Klingon" isn't. As a rule of thumb, if you'd feel wrong putting it in a good zoo or menagerie, then it's probably not a beast.

2. The beasts are not made up by the person drawing them. That's not the sort of project this is.

Those are the guidelines for the project as a whole, as Ben Towle and I and a few others worked out when the Animal Alphabet ended. But, because I like making things more complicated, I have given myself a couple of other rules:

3. No mythological, folkloric, or cryptid creatures: everything needs to have been made up by some traceable person and to exist in some particular fictional universe.

4. No more than one creature from any one source universe. So if I use "Bantha" I can't also use "Wampa."

So, over the next twenty-five weeks, expect me to draw on twenty-five further discrete fictional universes for an alphabet of strange and sometimes obscure totally fictional critters.

The anurid comes from the card game Magic: the Gathering. I don't know much about these creatures, as they entered the game well after I stopped playing it in 1994. They don't seem like amazing game-changing cards, but the monsters look suitably weird and intimidating. At first, I wasn't sure whether they were some sort of burly froglike humanoid race, but the cards they live on explicitly state that each sort of anurid (barkripper, brushhopper, swarmsnapper, and so forth) is a beast.

Next week: a very convenient beast to have around. (Care to guess?)
Posted by Isaac at 12:03 AM