Alphabeasts: E is for Erina

I was thinking about hoaxing up a different source for this week's "Alphabeasts," but let me come right out and admit the truth: I got this week's critter from our friend (and the organizer of these alphabet projects) Ben Towle. 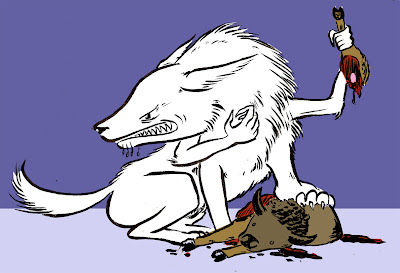 You see, when I say that E is for Erina, I am borrowing a demon from his (Almost) 100 Demons minicomic, which I think mainly survives as this tag on Ben's blog. (Ben, if the mini is still in print, let me know how people can order it!)

Ben's demons represent an awesome amount of visual inventiveness, and in a way it's a shame that I'm not drawing more of them. But if you want to build a whole alphabet out of Ben's demons, though, let me tell you right now that there aren't entries for Q, W, X, or Y. (So much for that plan.)

Looking at Ben's original Erina, I was stumped for a little while about how to pose my version. This is probably the single creature in my "Alphabeasts" set about which I have the least information—just a name and a single drawing. 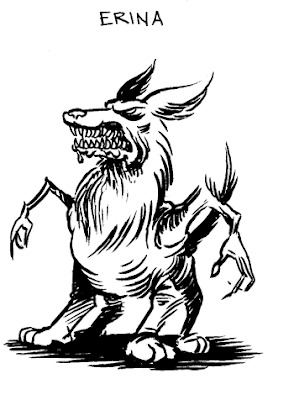 At first, I thought that since the opposable thumbs give the Erina more ability to manipulate the world, I'd try to make the six-limbed canine devious, tricky, and canny ... 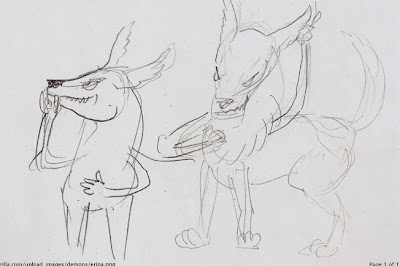 But looking again at Ben's drawing, the erina looked to me a lot more lupine than coyotine, so I rethought my ideas about the erina as a trickster demon. And since the erina seems to be a lone wolf, not a pack creature, I thought, "What's the main personality characteristic of the wolf?"

Then, looking yet a third time at Ben's drawing, it occurred to me that the erina is much sturdier even than the largest living canine—those are some thick legs. And so, I thought, it must be pretty big. Let's have it eating a bison. 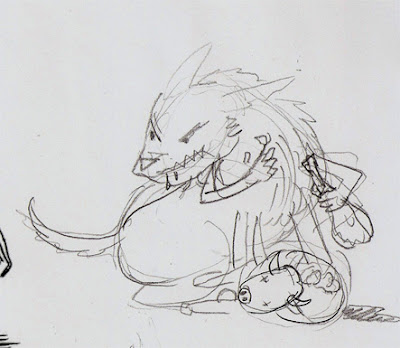 I leave it for you to speculate about what it might be defending its kill against.

By the way, Ben's demons happen to have been created independently right around the same time that Mike and I were drawing our own sets of a hundred demons. I've still got copies of our Demonstration minicomic, if you're interested in getting a copy of it...

For next week, I have a few options. What do you think I should draw for the letter F?

You've got until Friday evening to tell me.
Posted by Isaac at 1:23 PM

Really nice one-- I like the color contrast & the way the bison sets the scale.

I actually wish I had included some trees or something else to set the scale. Too easy, I think, to misread that bison as a smaller animal—a little dog, maybe—if you don't notice the horns right away. Still, I'm pretty happy with the way this one turned out.

I had a good inspiration (and thus motivation) for it!

Really nice job on the fur. Do you use a brush?

Sort of: I use a brush-pen (not a felt-tip, but one with a brush tip). I mean, for some drawings I mostly just use a technical pen (there always seems to be one nearby), but this one is almost all brush-pen. That's the fun way to ink fur!

The major disadvantage with this tool is that the ink isn't very dark. I have to crank up the contrast in Photoshop.

Hey, Isaac. Nice drawing! (Carnage aside.) I think this one really benefits from clicking to enlarge, by the way. I really like getting a good clean look at those teeth!

Re: the scale of the Erina--I don't think the bison is a problem, because to me it looks very like a bison. (If it weren't being torn apart and eaten, I'd go so far as to say it looks cute, even!) And trees in the distance might not have helped. What I *think* keeps your Erina from looking gigantic is the implied perspective of the viewer: given the fairly flat, head-on view of the Erina, the viewer would appear to be about as tall as the Erina herself!

Furthermore, the bushiness of the hair in the neck/torso area of the Erina makes it look a little top heavy, which gives it a neotenic look. Ben's version is far less puppyish, not least because the head looks smaller relative to the body, and his version looks taller (to my eye, at least), even without any reference object whatsoever, because the stance makes it loom more relative to the viewer, rather than being more on the same plane as the viewer.

I only mention all this because you seemed to wonder about the scale. Me, I like the deadly monster six-legged doggie! (I wonder if it breathes fire, like the six-legged dog of the Agip logo?)

I hear ya, there. I have a couple brush pens, too. I like them, but the ink always looks less solid than the ink I use with my dip pens and sable brush...especially when I see it on the computer screen.

Looking at some of the other Alphabeasts, I find myself wishing I were using tools I am more adept with — a crowquill, for example. But I am just not drawing enough these days to merit opening an inkbottle, dipping things, cleaning up ... all my ink has to be in the barrel of something with a cap.

Mike's right about the perspective or implied point of view making the bison seem puny. I tried to finagle that a little bit with my color "horizon," but that doesn't change the fact that we're seeing the erina straight on instead of from below. Well, I can try to learn from my mistakes.

I'm not sure I agree about the neoteny, though. Silverback gorillas are topheavy; do they look neotenic?

The silverback comparison is a bit apples & oranges. Compare your Erina to Ben's. Which looks younger? Why? I think the relative proportion of head to body is part of what I see.

In fairness, I have just looked at a few dozen images of silverbacks. Some of them, I submit, do look neotenic--though by no means all.

I mean, big heads relative to torsos are going to tend toward a neotenic effect almost inevitably. You know who I think looks neotenic on account of his big head, however incongruously? MODOK!

One thing you seem to have forgotten about the erina, Mike, is that its head grows consistently throughout its life. Ben's drawing is of a little pup erina!

Ach, you got me there, Isaac. I should know better than to presume against your comprehensive knowledge of natural history! Too bad there aren't any online ARKive videos about the erina to get me up to speed...

(It is not even as well documented as the yuzz-a-ma-tuzz.)