So last night I did the civic-minded thing and watched the Vice Presidential debate between Sen. Joe Biden and Gov. Sarah Palin. While watching, the Mrs. and I played a few cards of Palin bingo (I eventually won, at 9:45, with the vertical series "Tax Relief—Job Creation—Free Space [snarkily labeled "Air Space"]—National Guard—Drill"). Anyway, even with the laser-like focus demanded by the bingo cards, I found my attention wandering occasionally--not too far, but far enough for my hands to produce a couple of doodles. Since I haven't drawn anything in ages, and I have been pretty AWOL from the blog, I thought I'd share these veeptastic designs.

First up, a debate demon: 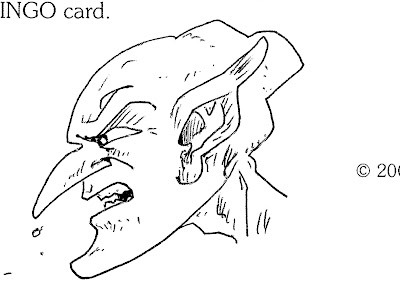 Next, a debate doll: 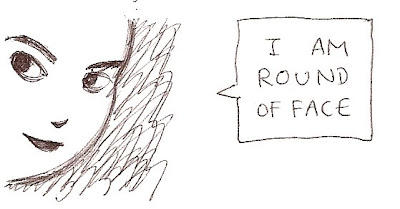 And no, I did not intend for either of these to represent either of the candidates or my feelings about them, though you are free to psychoanalyze my random doodles to your heart's content. Meanwhile, I remind you that I declared my endorsement of a perennial candidate over a month ago, after earlier consideration of a real Washington outsider.
Posted by Mike at 6:19 PM

I enjoy the doodles (especially the "round of face" one) and had fun with the Palin bingo (even though you won).

I do find it funny to be referred to here as "the Mrs."--since although I'm married, I'm not Mrs. Anything: like Anne Fadiman in "The His'er Problem," I am the very woman for whom Ms. was invented.* (I'll also answer to Dr., as long as no one asks me to set any bones.)

I wouldn't blink, though, at being referred to as "the missus." Funny how these things work!

I'm glad you find it funny to be referred to as "the Mrs." since I know perfectly well what your name is. I was just being jocular!

I just think it's interesting that I should have such a visceral alienation from the appellation "the Mrs." but have no trouble accepting the moniker of "the missus"!