... And we're back. It has been a long and difficult month. I think this is the first time I've felt like I've had time to put anything up on the blog, and even this is going to be pretty minimal. But we have a new comics game to play. I'm thinking of it as a way to get us started again, posting things weekly, with the goal of keeping the blog alive until we have real time to draw or write about comics.

I've been feeling guilty about not posting, which is pretty ridiculous, but if eight years of grad school couldn't train me to feel guilty for not writing, I'd probably have absolutely no sense of shame. Since I've been feeling guilty, I've been thinking about the way that our former colleague Carl Pyrdum will occasionally do what he calls "Google Penance," in which he takes a search term that led someone to his blog and then writes about it, essentially adding the entry that the errant Googler seems to have wanted his site to have.

Mike and I have decided to undertake a variant on this challenge, which we'll call "Doodle Penance." We'll try to do this once a week. We'll dip into our website analytics at the beginning of the weekend and produce some doodles based on one of the searches that led someone to our site in the previous week.

This week, the "lucky" search term is: fun things to draw comics on. 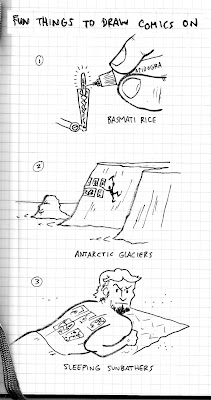 (Probably this person found the back-issue listing for our sketchbook project, "________ Are Always Fun to Draw," which is still available for you to order.)
Posted by Isaac at 11:39 PM