There are more than fourteen inches of snow on the ground here as I write this, and yet I'm still planning to fly home tomorrow morning. It seems pretty implausible, but that won't stop me from getting up crazy early to head for the airport.

But before I go, I think there's some penance to take care of.

Some hapless soul was directed to our website when he or she asked the internet for "superboy jamie muscles" this week.

Probably this fan of Silver-Age silliness was looking for that issue where a thinly-veiled Charles Atlas made a cameo appearance to thump the twerp on the chest, kick sand in his face, and steal the affections of Lana Lang. 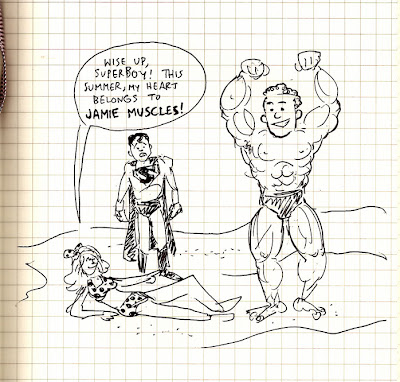 Superboy never was much of a "Hero of the Beach."

Happy Hannukah, Mike. Drop your doodle in here when it's done, okay?


—Sure thing, Isaac! Here's my vision of Superboy Jamie Muscles: 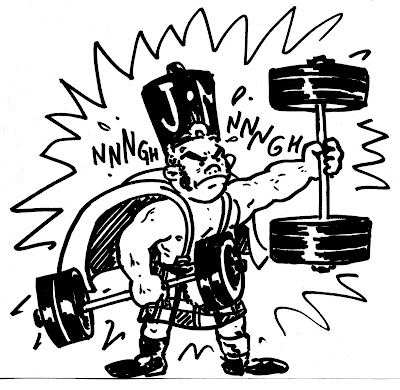 Here's my Sharpie-direct-to-paper doodle, executed so swiftly that I screwed up the socks. Whatever: it's a DOODLE, not a proper drawing. And I think I have captured sufficiently my vision of a pint-sized Highlander heavyweight, though his sideburns make him look older than his age (he's a wee lad of some six summers, he is). Jamie Muscles. Respect him!
Posted by Isaac at 10:12 PM

This doodle penance project is inspired nuttiness. Keep 'em coming. And thanks for the link!
Mot

Yeah, this is a great idea for a sketch project! Keep up the great work... I'm digging it.