The week's "Doodle Penance" has to be a solo effort, because Mike has other things on his mind. But I'm going to supplement my little doodle with a few selections from other cartoonists.

That's because when I read this week's search term — "comic freedom poetry" — a little slideshow started in my mind: it was something like "Stereotypical Comics Hippies I Have Seen Outside the Undergrounds," and featured the following images.

First, of course, Chester Williams, a minor character from out of Alan Moore's run on Swamp Thing. Chester's the guy who finds one of Swamp Thing's hallucinogenic tubers in the swamp... 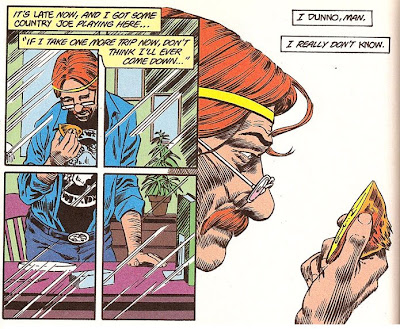 (That's a page drawn by Stan Woch, and collected in A Murder of Crows.)

Chester's a pretty sympathetic guy, even if he's not the smartest or most upright of characters. I'd be willing to argue that you can tell a lot about a cartoonist's outlook from the way he treats his aging hippies. Faded idealism is a vulnerable sort of personality, and some cartoonists won't treat it kindly. Early signs of Frank Miller's cynicism, for example, are obvious in his handling of this all-business peacenik in Ronin.

(You'll probably want to click that to enlarge it.)

And of course you'd know that these hippies belonged to the satirical and grotesque world of early Dan Clowes, even if he hadn't signed the title panel. 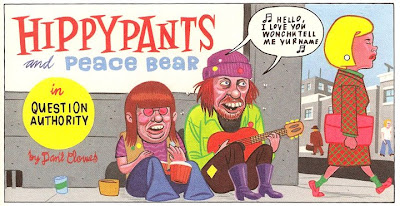 All of this leads to my own "freedom poetry" doodle. I'm not sure what this says about me as a cartoonist, though. 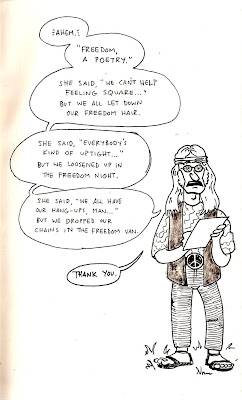 Maybe I'm trying to say that freedom really isn't the secret to good poetry?
Posted by Isaac at 3:52 PM

Somewhere Robert Frost is thinking of tennis without a net. Or, wait, no, he's dead...he's not thinking about anything.