Okay, maybe I didn't put as much thought into this week's "Doodle Penance" as I should have. I'm not sure.

Someone came to our site looking for "shriveled folks in a comics kingdom," and that googler didn't stay put, because it's a matter we haven't really addressed up to this point.

And so we set about to address it. My own thought process went something like this:

"A comics kingdom? Where could that be? I'm pretty sure Papa Smurf isn't the king of the Smurfs. Babar is a king, but are those books really comics? And Doom is definitely the monarch of Latveria, I don't think I've ever heard anyone refer to Latveria as a kingdom. Maybe Wakanda, then?" 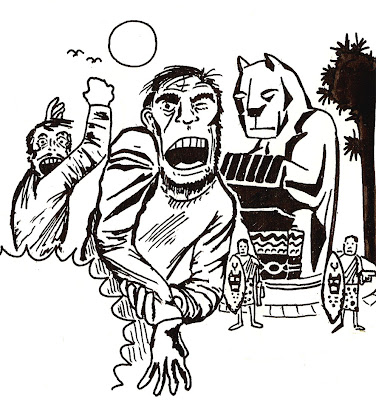 I'm sure you'll recognize Ulysses Klaw, there, all Ahab-like, getting his arm shriveled or withered by whatever's glowing in the foreground. (My guess? Radioactive vibranium. That stuff will eff you up.) Later on, of course, he'd transform himself into a bright-red, anosmic being of living sound. This is sort of his origin moment. But you knew that.

Mike? I'm guessing you won't have drawn the same thing as me this time...

—Indeed not. But may I say DAMN? That's a fine doodle! I bow to you!

No, I haven't drawn the same thing as you. When I first saw the prompt, I thought of notably shriveled cartoon characters I've seen: Superman post-nuke in The Dark Knight Returns, a Kurt Wolfgang doodle in my sketchbook, the California Raisins...but none of these was sufficiently kingly. In the end, I did opt for at least one non-royal figure in homage to the Raisins, but mostly I took some beloved cartoon kings and shrank the (occasionally ample) flesh off their bones: 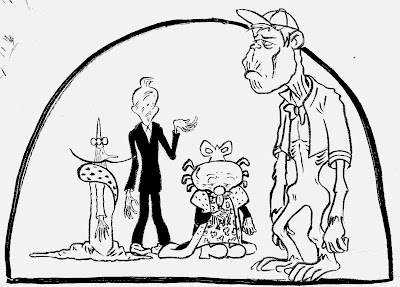 From left to right, that's Otto Soglow's Little King (the fabric of whose robe is gathered in folds on the floor since he no longer puffs it out with his customary girth); Walt Wallet from Gasoline Alley (shoehorned in here as the creation of cartoonist Frank King); Jack Kent's King Aroo, whose hair itself has shriveled (generating an uncanny family resemblance to the Hawaiian Punch mascot); and Grape Ape after too much exposure to the sun (my Raisin homage for bona fide shriveling).
Posted by Isaac at 6:21 PM

The energy of my doodle I owe entirely to Kirby. That's such a heavy swipe from FF #53 that it's practically tracing. (The background is partly borrowed from FF #52.)

Hi Isaac and Mike! I've been catching up on your blog this weekend and wanted to say how much I'm enjoying it. I'm especially enchanted by the google search phrase that led to this doodle penance.