Alphabeasts: X is for Xenomorph

This week's "Alphabeasts" entry is another one of those about which I don't have a whole lot to say. I like the first couple of Aliens movies a lot, but I don't think I've seen any of the other ones. I know about as much about the titular aliens' life cycle as can be gleaned from the first movie: egg-facehugger-chestburster-xenomorph. That's about it.

Still, it's not as if there are a million fictional creatures that start with X, and I thought it would probably be fun to draw one of these beasties. I'm guessing that I won't be alone in that assessment. 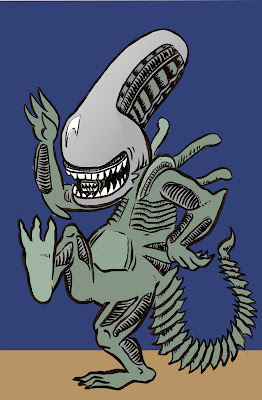 Apparently I still have a little bit of wild rumpus left in my system from last week.

Here's a doodle I made (with Sendak open in front of me) when I was trying to figure out how to draw a xenomorph without lapsing into cliches of awesomeness and radicality. 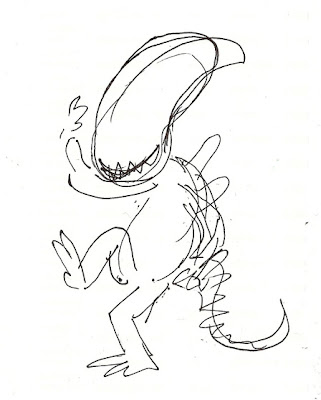 I'm guessing that I got some of that Sendak goodness from last week mixed up with this diner scene from Spaceballs.

It's also possible that this xenomorph is buds with Elijah Wood and is dancing "The Puppet Master."

Well, better an earworm than a chestburster, I guess.

Next week: the oldest entry in my alphabet. That is, it's the creature in my list that was invented the longest ago.
Posted by Isaac at 2:32 AM

Where are his straw hat and cane?

To tell you the truth, I had forgotten about the scene from Spaceballs until after I finished inking the drawing. (I was hearing the song in my head, though, and wondering why I was thinking of Michigan J. Frog at a time like this.)

I based the pose on this image from Where the Wild Things Are, if it's not obvious right away. I think it must have been the dancing pose that reminded me—through Mel Brooks, of course—of the singing frog.

This is pretty great! I love the gesture here. (And don't worry: I just popped in to Twitter and someone else has the boater and cane bit covered! -

A highly-appealing xenomorph... hmmmm, never thought I'd say those words together.

Definite Sendakian influence here along with the subliminal Brooksian suggestion!

Weird...while the external face looks quite delighted, the internal mouth looks a lot less thrilled with life. Maybe the view from in there isn't so great?

While there were Xenos aplenty in the X category,yours was easily the most lovable. Great pose, the Sendak reference definitely shines through.