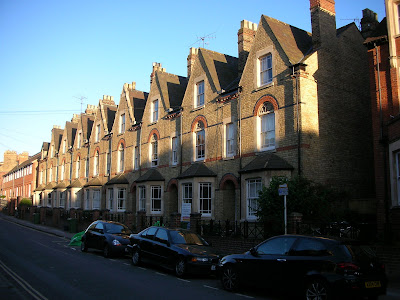 In the neighborhood of Oxford known as Jericho, on Walton Well Road, there is a series of townhouses whose doors are surmounted by sculptural lunettes featuring scenes from the life of the prophet Elijah. I figured this out mostly thanks to the last lunette in the series: that whole chariot of fire deal is pretty memorable. But most of the other scenes were unfamiliar to me, owing to the gap since my last attentive reading of the books of Kings, so I appreciated the excuse to revisit 1 Kings 17 through 2 Kings 2 in order to figure out what exactly was going on.

Our story begins with Elijah being fed by ravens (one of which seems to have lost its head in this first lunette; and if you ask me, those ravens look rather eagle-like): 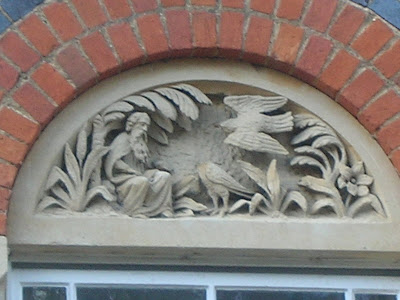 Next Elijah reassures the widow of Zarephath that she won't starve if she shares her food with him: 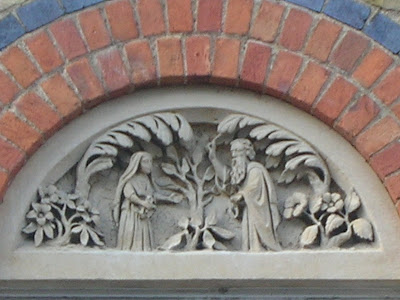 Continuing with the theme of Elijah's meals, the third lunette shows an angel providing Elijah with a jug of wine and a loaf of bread (but no Rubaiyat, apparently): 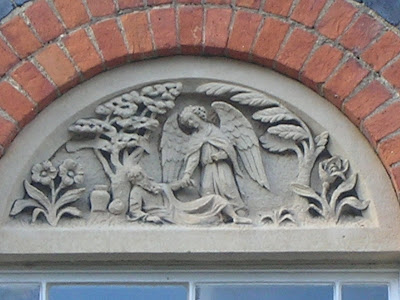 Later, Elijah speaks with God while hiding out in a cave. At least, that's what the biblical text describes; the sculptor here has personified God in the figure of an angel (a license sanctioned by Genesis, where God appears to Abraham in the figure of three angels): 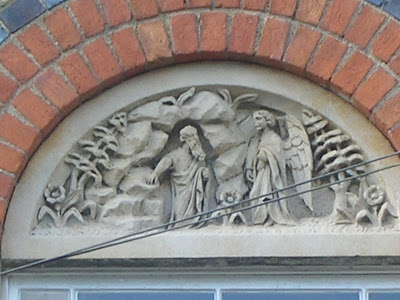 Here's Elijah recruiting Elisha to be his attendant by throwing his mantle over him: 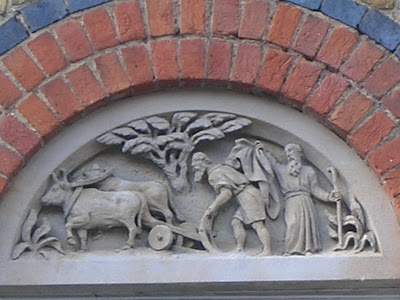 And here's Elijah confronting wicked king Ahab at the vineyard of Naboth, for possession of which Ahab has had Naboth murdered: 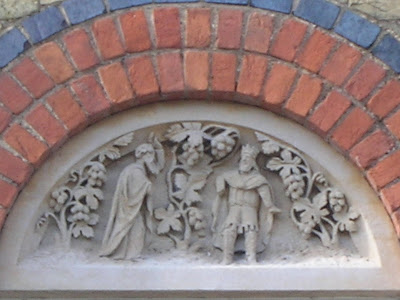 Elijah later gives Ahab's son Ahaziah the bad news that he will die in the sickbed where he is attempting to convalesce from a fall (nice potted plants, here): 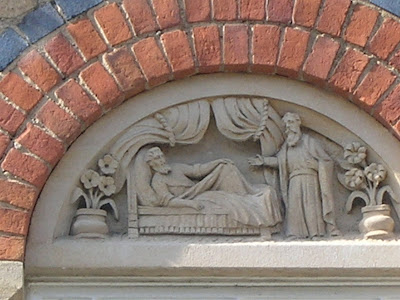 Shortly before Elijah's departure from this world, he uses his mantle to split a stream, Moses-like, in company with Elisha: 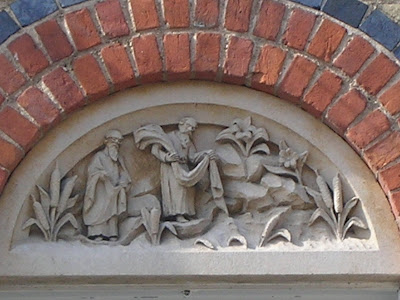 And there goes Elijah, in a ride suitable for Parliament-Funkadelic (though he fails to adopt the gangster lean): 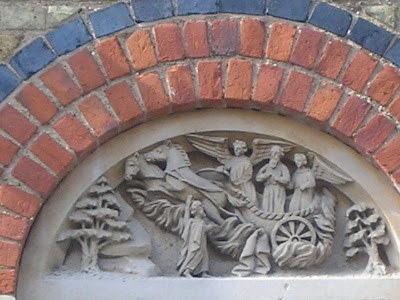 I like these lunettes for their charming understatement. Some highly dramatic scenes from Elijah's career are overlooked in favor of quiet moments of sleep, hunger, and concealment. Even the miraculous departure of the fiery chariot is strangely static, given the erect verticals of the human figures (as well as of Elijah's mantle, which stands in a tall bundle below the chariot, ready for Elisha to take it up). This quality, along with the oddly stunted proportions of the characters and the oversized foliage, reminds me very much of medieval manuscript illustration.

Mind you, I'm a little sorry that there's no tenth lunette to show the sequel to Elijah's career, where Elisha, still finding his voice (as it were) in the role of Elijah's successor, curses some children who mock his baldness, thereby summoning up a pair of she-bears who maul forty-two of the brats. To paraphrase the words of Christian rocker Bill Mallonee, "You might say they learned some healthy respect." (But please note that I do not endorse the mauling of anybody, by bears or otherwise.)
Posted by Mike at 2:33 PM

Labels: not comics, reports from the field

Thanks hugely for the excellent photos and piquant commentary on the cartoons in stone of the adventures of Elijah, prophet-at-large. I'm dying to visit this place now, thanks to stumbling on your blog whilst looking for something else. . .

Can I BEG you to do the same for the delicious cartoons in stone in the Chapter house of Salisbury Cathedral? They are a graphic novel of stories in the book of Genesis: folksy, often droll, and utterly magnificent work of one master mason who must have spent years on this spellbinding narrative in stone. BTW this frieze is described charmingly in Rutherfurd's historical novel "Sarum",

I thank Providence slimeball Thomas Cromwell and his thugs didn't vandalize this frieze as they did much of the magnificent West face (entrance) of the cathedral. Salisbury Cathedral is both stupendous and enchanting, and its perfect cloister with the pair of majestic Cedars of Lebanon are magical, especially in the mists of autumn twilight. . .

Sorry for the belated response--I think your comment was posted while I was traveling, so it slipped under my radar until this post was brought back to my attention via email--but if I ever get to Salisbury I'll be sure to keep an eye out for those "cartoons in stone." The whole setting you describe sounds quite beautiful. As I'm no longer in England anymore, however, I'm not sure when I'll get to it!

Well blow me down... I was just about to make a blog bage of my own about these bizarre statues (which I walk past every day), but I hadn't done as much research as you! Many thanks for the elucidation!

I've been walking past them for years without noticing them until this week, and then I tried to find out WHY they are there.

WHY are they there ? Does anybody know ?