I have a few last comics-related items to report from my time in Rennes last week. Comics actually got name-checked during one of the plenary lectures of the Arthurian conference, along with adaptations of Arthurian literature into other media. And at the big Arthurian exhibit at a museum in town, there was a copy of a bonus volume that accompanied a nine-part BD rendering of the Arthurian saga in a highly Celticized version (e.g., the character known to English speakers as "Gawain" appears as "Gwalchmei," while "Merlin" is known as "Myrddin"--whence Matt Wagner's Mirth from Mage

The conference organizers also gave us little touristy books about Rennes which featured a few items about the city's local comics connections, including some heavyweight French comics. The artist Franquin, creator of Spirou and Gaston Lagaffe and recipient of the first Grand Prix at Angoulême, passed on the production of the Spirou strip to Jean-Claude Fournier, a Breton cartoonist who ran a studio in Rennes. Astérix and Latraviata, a recent volume in the venerable series about antique Gallic antics, includes scenes set in the ancient Roman site that later developed into the city; the volume was appropriately launched in Rennes, with co-creator Uderzo contributing this drawing for the event: 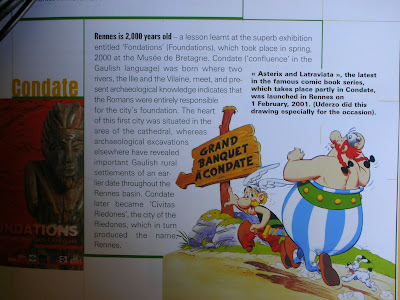 And a few volumes of Tintin have been released by a Rennes-based publisher as translated into Gallo, a Romance language spoken in upper Brittany, including Rennes, and unrelated to neighboring Celtic Breton. Observe the similarity of Gallo to French in this cover to The Secret of the Unicorn (Le Secret de la Licorne in French): 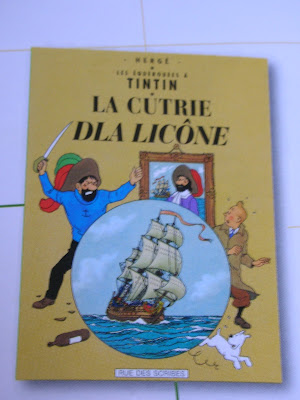 That's all well and good for BD proper. But I was also delighted to see some revolutionary appropriation of good ol' American comics by King Kirby himself, in a poster promoting a socialist organization. Here's the poster as I found it pasted to what looks suspiciously like a refrigerator by the side of the road: 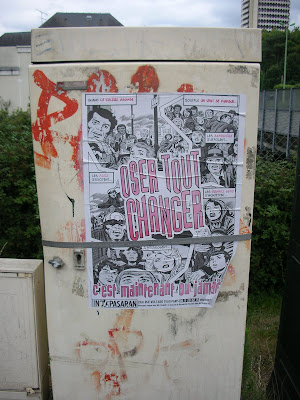 "Dare to change everything--it's now or never" it proclaims: Oser tout changer; c'est maintenant ou jamais.
And here are some details of panels with their newly revolutionary dialogue! When anger bellows... 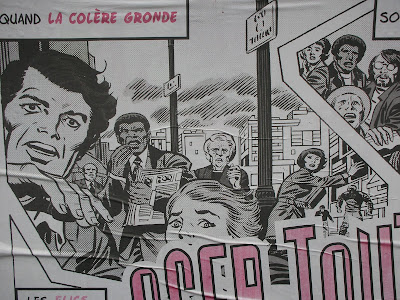 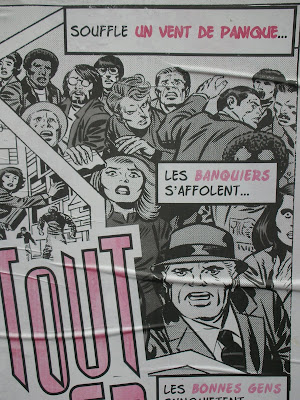 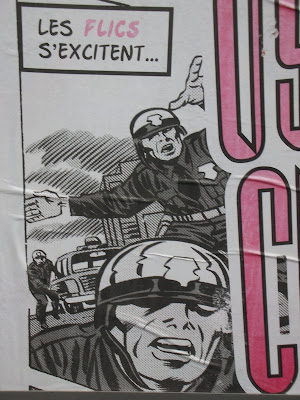 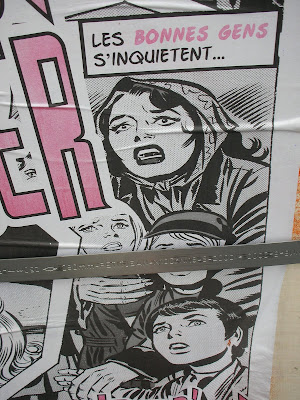 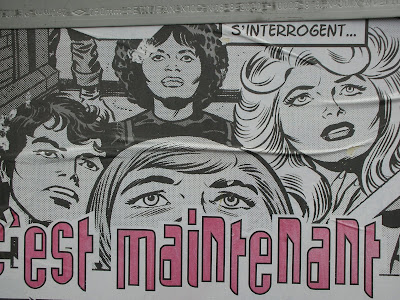 I have to say, while Kirby may have caught some flack for the square appearance of some of his characters back in the late 60s/early 70s--especially all the men wearing hats out of doors--I think the energy and drama of his cartooning work great to convey a sense of revolutionary urgency here in a diverse group of persons old and young, male and female, black and white. And suffice it to say that I could not imagine panels by Curt Swan or Wayne Boring being convincingly repurposed in this way. Vive la révolution!
Posted by Mike at 1:09 PM

ARE YOU READY FOR THE WORLD THAT'S COMING?

(That's what I have to say about that awesome poster.)