It so happens that the onset of the Democratic convention this year coincides with one of the most important holidays in my personal calendar: Walt Kelly's birthday. Today marks the ninety-fifth anniversary of Kelly's birth, so it seems appropriate to offer my endorsement of the perennial nominee possum: 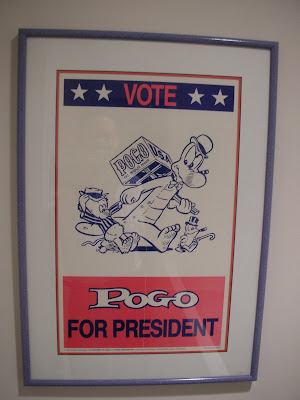 The timing seems right to honor Kelly. Only yesterday, Eddie Campbell considered the remarkable coherence of Impollutable Pogo as a through-composed comic--remarkable given its origins in the daily papers over a period of many months. I remember that volume fondly as one of the earliest Pogo books I acquired, back in elementary school when you could still find newly-reprinted Pogo paperbacks for sale at Waldenbooks.

Over the years, my loving parents and friends have helped me to amass a pretty satisfying library of Pogo books, prints, and tchotchkes. Here's a glorious print of practically the whole Okefenokee gang gathering for a perloo (please excuse the reflected glare from the flash: without the flash, the picture was blurry, but I did try to position the glare in a blank area of the drawing): 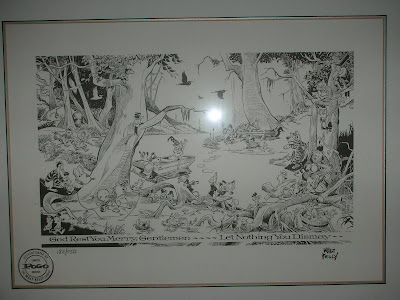 A few years ago my parents gave me a color print of the most famous Kelly tag, used here (as in Impollutable Pogo) as a cry against pollution: 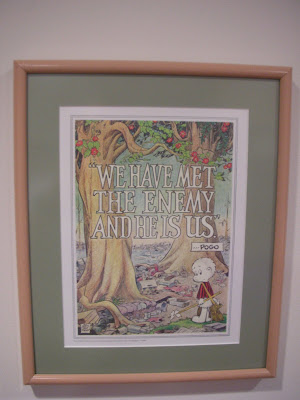 My most recent Pogo art acquisition was courtesy a friend of my brother. Here is what looks to be a color proof for a Pogo Sunday page--possibly with annotations by Kelly or one of his assistants?: 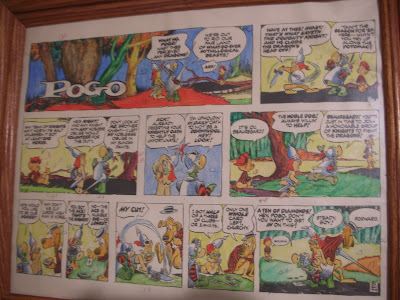 Still, my happiest acquisition came three years ago, when my parents came through with a copy of the final original Pogo book missing from my collection, Pogo à la Sundae. Here's a photo of that glorious moment when I unwrapped the prize (and the photo is flanked by a couple of plastic Pogo pals): 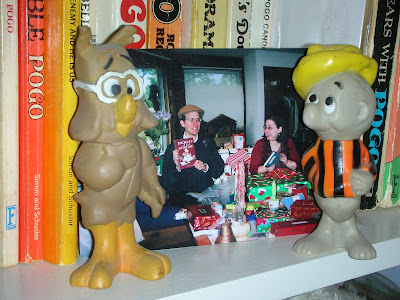 And having revealed just a snippet of my Pogo shelving, I owe it to Isaac--who challenged me to produce some "shelf pr0n" of my own to match his--to post one last Pogo picture: 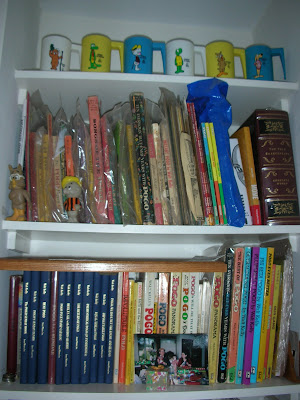 That's all the original Pogo books, many in original editions; all the trade paperbacks collecting material from the Pogo fanzine The Okefenokee Star; several issues of Animal Comics and the Dell Pogo quarterly (including the Pogo Parade); a few non-Pogo Kelly projects; some souvenir cups; and figurines of Pogo and Howland Owl. And just in case you were wondering: yes, I've read all the books and comics. Most of them several times over since my impressionable youth. Which, if you know me, explains a lot of how my mind works...
Posted by Mike at 9:04 PM

Not just how your mind works, of course, but how you draw! No less a luminary than Michel Gondry has remarked on your splendid approximation of Kellyish critters. Now your working secrets are revealed: "How do you get to Okefenokke Swamp?" "Practice, man, practice."

Thanks, Kaiser! (And, um, I take the gentle hint. The run-up to the school year has kept me off the blog and away from the pencils & brushes for a while, I'm afraid, but having survived my first break-neck day of the new school year I'm happy to catch my breath again with a little posting. And who knows, maybe I'll draw something again sometime!)

I still catch myself saying "strorbry" for "strawberry" because of all the Pogo I read in middle school.

I, too, am fond of "org," as well as that remarkable oath "rowrbazzle!"

Incidentally, I left out one precious item in my collection: the 1980 clay-animation film Pogo for President, featuring Vincent Price as Deacon Mushrat and Jonathan Winters as Porkypine and Molester P. Mole. It's an odd film, and not all of it is authentically Kellyan (big surprise, as he'd been dead for seven years when it was released!), but I have watched it times beyond telling.

And if the collection seems impressive to you, well...it took a full twenty-five years of slavish Kelly fandom for me to amass it. With a lot of help from the family and friends who had a reliable sense of what I would always appreciate more of!