How have I spent my summer vacation? Well, I may still have a post or two in me about my comics "discoveries" in Wales, but mainly I've been busy with moving in to this new place. I did take a day off from unpacking this week, though, and that took me back down to White River Junction and the Center for Cartoon Studies, where I met up with a few other comics scholars for a nice lunch and a quick tour of the CCS facilities.

Something I hadn't seen before is their Schulz Library, which is just a single room lined with shelves in the same building as the Main Street Museum. It's an incredible repository of interesting comics, books, and minicomics. 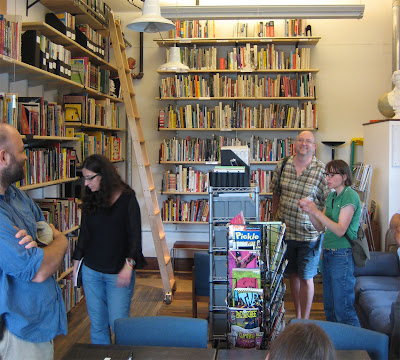 From the expression on Gene Kannenberg's face, you can see that it's a sort of treasure trove—about as close to Mrs. Hicks's library as you're likely to get in this hemisphere. I was particularly impressed with the minicomics collection (as yet uncatalogued), which is in the central island between Ana Merino and Robyn Chapman. Those gray bins are full of minis, on shelves all the way down to the floor.

Part of the reason I found the space so impressive is that I've been working on my own accursed comics library, unpacking it from boxes and alphabetizing as I go. I think I've got it all unloaded now. For a while I was worried that the comics wouldn't all fit on these new (crappy) shelves. (I do not recommend IKEA's "Leksvik" shelves: they look nice, and they're fairly light, but both of mine are distinctly wobbly.) 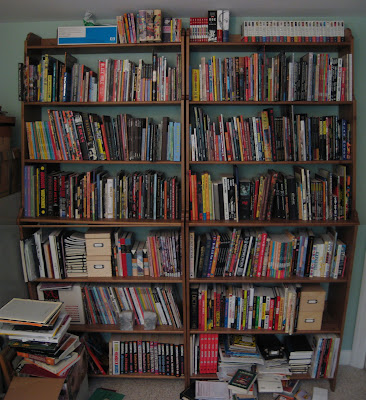 I think it's going to work, though: ceiling-to-floor comics. The perspective shift in the middle is the result of stitching two photos together: even IKEA shelves aren't going to distort that much in their first week of use.

If you click on that image above, you'll see a fuzzy image that hints at my dedication to Krazy Kat, to Lewis Trondheim, to Mome, and to Alan Moore. (How did I wind up with three copies of Watchmen, and how have I not discarded at least one of them?)

I'm afraid that's about as much comics activity as I can report this week. I did catch up on the latest Fables paperback (and the last Y: the Last Man one), but I don't have much to say about those. (Well, except that I thought it was genuinely weird that Yorick shaved his head to look more like the writer of the series. I'm not sure what to do with that.)

Anyway, as long as I'm showing blurry photos of the shelves in my study, here's the bookshelf in our house with the most books on it. It's not especially wide or tall; it's just that most of the books are quite skinny.

That's poetry, twentieth and twenty-first century only. It's all alphabetical, but I defy you to read those spines.
Posted by Isaac at 5:28 PM

Of course, I knew right off what that last bookcase would contain. Those poetry volumes are slim, as a rule.

I'm pleased to see all those volumes of Lone Wolf and Cub atop your righthand comics bookcase; coincidentally, my LW&C volumes are also on one of my highest shelves. I hope that you have in fact READ all twenty-eight volumes by now, because, sir, they are outstanding.

And the Schulz Library looks like a nice, user-friendly set-up. I wonder how the Ohio comics collection compares in terms of accessibility?

Lone Wolf and Cub is up top because there's not much room between the top shelf and the ceiling. Alas, I have not read it. I know it wouldn't take terribly long, but I also know I have other things I need to do first. And since there's no day in my week when I couldn't be writing, or drawing, or using fire or whatever, it hasn't been easy for me to find time to read that magnum opus. Some day, some day.

Well, in my book, anyone brazen enough to post a photo of their poetry collection is inviting response. Mine will be questions:

--Given that by the middle of the fifth self down, we're still at Plath and, early on in the sixth (of six) we have Wm Carlos Williams (yes?), is it reasonable for anyone to suspect that the Pl-Wi boxes have not yet been unpacked or, worse, lost?

--Archie Ammons, where are you?

--Do I see two (2!) dog-eared paperback Yeats completes on the bottom shelf? If so, there's a novel here.

My poetry collection just happens to be heavier in the first half of the alphabet. (H is especially heavy.) It's all unpacked in the photo.

Those Yeats collections are different from each other: one's a "collected" and the other is a teaching copy of the "selected" (I think).

There are five books of Ammons up on the top shelf. Brink Road, Garbage, and Bosh & Flapdoodle, plus a collection or two.