On another of my rambles through Swansea, that "ugly-lovely" town, I wandered through the Swansea Market, vaguely hunting for souvenirs. It's an odd institution, this indoor market. Their website says they were established in 1961, and some of the shops may not have changed since then. It gave me an overall feeling of updated Victoriana, rather than anything quite so modern as Six Flags, JFK's inauguration, or Hemingway's suicide. (You see, I can read Wikipedia, which also informs me that 1961 marked the demise of the farthing as British currency.)

Where was I? Right: at one of the market's dingy stalls, I saw a slim book that came with a sheet of fairly cool Spider-Man stickers. I like to put stickers on the occasional outbound piece of comics-related mail,* so I decided to pick these up: 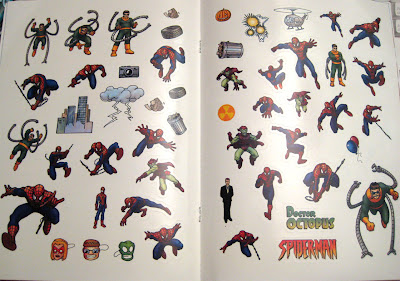 You never know when you'll need a sticker of a camera or a thundercloud or a pair of balloons.

But part of the fun in this stickerbook is how egregiously off-model the characters are, in terms of their concerns and their abilities. The story makes no sense, even if you know nothing about Spider-Man and Dr. Octopus, but I have to assume that most of the book's target audience would know more than nothing. Here's what you get around your stickers:

Spider-Man is in New York, and a pleasant sunny day turns cloudy and stormy, so he figures something bad is happening. A garbage can flies by him while he's swinging toward the storm. Then he sees the storm is being caused by his old nemesis, Doctor Octopus: 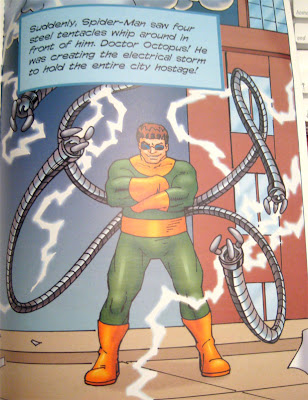 Many cephalopods are known for their weather-manipulation abilities. (Cuttlefish, for instance, can cause sleet.) So it's not surprising that the writer (uncredited) would make this mistake about good old Doctor Octopus. But in fact he's just a guy with extra mechanical tentacles. (Okay, I see the irony of using the phrase "in fact" to talk about Dr. Octopus. Sorry.) He doesn't have any mollusk powers at all! Why, he can't even change the color of his skin, or shoot out a cloud of ink!

I don't know why the writers didn't use Electro instead. He can't make storms, but he can at least make lightning; it's not a stretch. I've seen him on stickers here in the U.S. But maybe they figured Dr. Octopus was more recognizable, and they couldn't think of any way for him to be a menace other than making it rain on Manhattan.

Once he sees Spider-Man, he's in a hurry to get away, I guess, or to taunt Spidey from a safe disance: 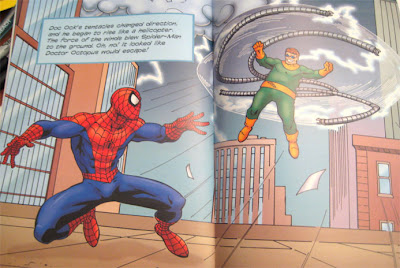 Oh, yeah: did I mention that this guy could fly now?

Because, as everyone with a pool noodle knows, whirling a few flexible cylindrical tubes in the air is going to give you plenty of lift. Fortunately, Spider-Man realizes that there are only a couple of pages left in the book, so he snags his enemy on some webbing: 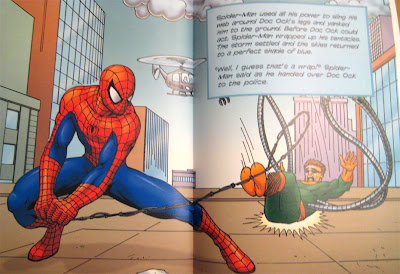 (I really like that look on Doc Ock's face, actually.) And that's the end. Never mind that none of those four mechanical arms are restrained in any way. Octavius's dignity is broken, and he surrenders meekly. The police come and take him away, for the heinous crime of weather manipulation, I guess. Or maybe there was a warrant out for a previous spree of cloud-seeding.

This reminds me all too much of the ending of another sitckerbook, Stick with Hulk, that I've been meaning to write about. The story's not important, although it's equally dumb. Here's the penultimate page: 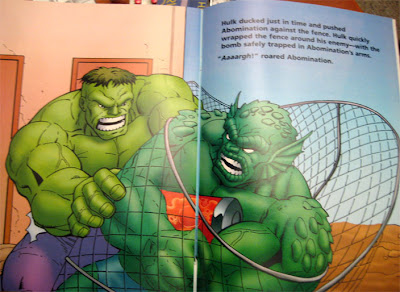 Hulk wraps the Abomination in a chain-link fence and offers him a massage. Then, the stunning conclusion: 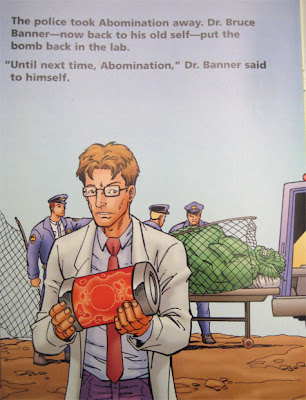 Hulk changes back to a fully-dressed Bruce Banner and effortlessly retrieves the radioactive macguffin from the snarling, super-strong Abomination, who is still struggling to free himself from his chain-link fence. It's for pleasures like this that I often linger in the toy aisle at the drugstore, or in shabby markets in little Welsh seaside burgs.

* This is the sort of postal goofery around that I'm talking about. See Spidey hop! 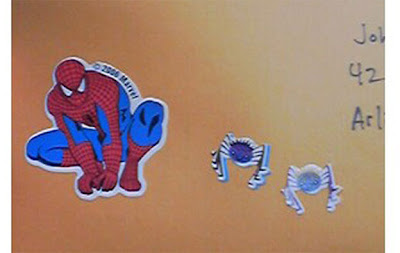 I like the post, but my favorite part of it might be the link to the Wikipedia entry on "Pool Noodle." Because who knew that the free encyclopedia would have a subentry on "Noodle Wars" with such handy craft advice as the following?:

"Pool noodles can be used to make toy 'weapons' like swords or spears. You simply cut a pool noodle in half and you have two 'swords', and the handle is the base of the noodle, or you can insert a piece of PVC pipe into the noodle and use that as your handle. You can make many 'weapons', using pipe or not; some examples with pipe are swords, long swords, spears, maces, war hammers or axes, and daggers. Examples without pipe are swords, long swords, spears, and daggers. Duct tape can also be used to join pieces of noodle together; thereby making the 'blades' for axes. If you have a hollow noodle, you can fill it with water and blow on the end to spray your enemy."

And there's still more there, too. If we ever revise "Sex Aliens Are the Best Aliens," maybe we should change the dialogue to read "It's for my Bulgarian Noodle LARP!"

There is so much more to love about these stickerbooks (aside from the pool noodles, I mean).

Check out the way the background changes between the "Doc Ock is flying" and "Spidey yank" pages. Not only is the storm all gone, but the buildings have all moved around!

P.P.S. I feel compelled to note the following link -- "It's for my wholesome Christian LARP!":