This is going to be my last Alphabeasts post. It's hard not to be a little wistful about the passing of this project. It drew a lot more artists to make a lot more art than the organizers could have imagined, and personally I think my cartooning has improved a lot over the last six months, at least within the idiom I've been working in.

(While you're looking over there, consider checking out the full string of D&D creatures drawn by Ben Towle, the wacky yokai by Leah Palmer Preiss, the mega-fun kaiju by Joey Weiser, the spontaneous watercolors of Lupi McGinty and the crazy inventions of her daughter AZ, Caitlin Lehman's fun and stylish drawings, the often-hilarious cartoons of Henry Eudy, and the energetic and stylish digital sketches of Andrew Neal, the guy who deserves enormous credit for managing the whole big project. Those are some terrific sets of images by some of the people I've been really happy to meet over the course of this project.)

You might be wondering how I made it this far into my alphabet without using Dr. Who. I don't really know a lot of Dr. Who lore—I'm much more a Star Trek nerd than a Dr. Who nerd—but my impression is that most of the alien menaces on Dr. Who are, though weird looking, pretty sentient, and my original parameters for the project therefore excluded things like daleks and cybermen. Also, once I started doing my research, half a year ago, I found this: 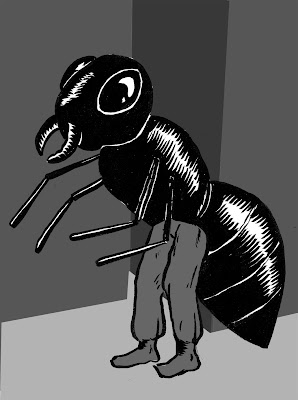 The zarbi are officially a race of insectoid alien monsters, but to me they sure look like some dude wearing a gigantic ant body over normal pants and shoes.

This is what people are talking about, clearly, when they say that the special effects on the old Dr. Who were not all that great. The zarbi appeared in the second series of Dr. Who, in 1965. Maybe I shouldn't be too critical. I've never seen those early episodes, and I know that Star Trek wasn't doing a whole lot better four years later.

Anyway, that's it for me on this project. I'm pretty sure I'm going to be on board for the next alphabet, which is supposed to be illustrations of characters from books. I might be able to scrounge up a few blog posts between now and the next letter A, but to tell you the truth I'll probably need the time for grading or sleeping.
Posted by Isaac at 3:02 AM

Nice drawing--and great wrap-up post. I'm going to do an Alphabeasts wrap-up/summary blog post at some point as well. I've just been too slammed with work lately. Congrats on completing a full alphabet! And I know I speak for a lot of folks when I say that I really enjoyed reading your interesting and well-researched blog posts throughout this project.

Thanks, Ben! I'm glad to know that you've been reading along. (I like contributing the drawings to Tumblr, and I think I've been doing a pretty good job with the last half of the alphabet or thereabouts, but a lot of the time my heart is as much in talking about the creature as in drawing it.)

I wish I could do a longer and more substantial wrap-up, or a series of wrap-up posts. It would be fun to go through all of Caitlin Lehman's drawings (or yours, or Leah's, etc.) and say what seems really great about them—this project has produced some real gems.

Isaac, it's been a true pleasure working my way through this project with you. Your entries are always surprising and a little off the beaten path, which I enjoy. Thanks for being such a great pal on the Alpha path.

I guess I sort of guaranteed that I'd be "off-path" a little when I decided not to take any creatures from folklore, and no more than one creature from any given source. No zombies or yetis for me, then, and once I'd done the landstrider I couldn't even do a skeksis...

In the back of my head I am thinking I'll do an all-mythological (or all-cryptid) ABC a few years from now, when my son is old enough to draw along with me.

Wow: the zarbi! I've actually seen that episode, one of the few First Doctor (William Hartnell) stories that I've watched. And brother, it is ODD. The actors who play speaking insect roles use very mannered cadences to their speech and stand with very stiff poses. And I can tell you that the ants-on-a-pair-of-trousers don't look any more convincing or any less ridiculous when they're moving.

Yeah, it's not quite like I was saving the coolest creature for last, huh.

(This raises an interesting question, in answer to which popular assessment around the house seems to be in favor of the rust monster, though I am also really pleased with my run though I-J-K and V-W-X.)

I hope you've followed my links to those wrap-up collections on the Tumblr blog, Mike. They're rad...

Anyway, I'm glad at least one person had seen the zarbi before seeing this post!