Alphabooks: A is for Aslan (redacted)

So: the next big alphabet project is going to be characters from books.

My plan is to draw characters from twenty-six different sources again, plus one twenty-seventh source that I'll feature in a separate post. As you may expect, my plans are a little more complicated than that, but my desk has been in such a jumble this month that I'm not sure how well the plans are going to come together.

Possibly it's best for me to say no more about them for the time being.

Meanwhile, if only to keep my foot in the door, here's a leonine Christ-figure: 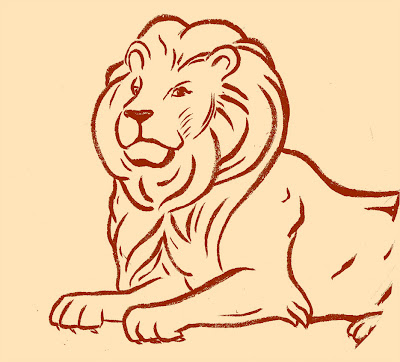 A is for Aslan. If this guy looks familiar, it might be because of a theory of mine:

I don't have a way to prove this, but I think lions must have, as a species, the highest ratio of sculptural representations to real living specimens of the species. (Extinct and mythical species must be excluded from the calculation, of course.)
Posted by Isaac at 3:33 AM

That's an interesting theory, re: lions and sculpture.

I can say this: Aslan is very well represented among the Alphabooks entries under "A." (Alice is also very popular, as is Ahab. I thought the single drawing of Adam was pretty amusing, too...)