Well, I know that some people are really itching to see Ben Towle's constraints for our in-progress Elfworld submission, so I'm going to go ahead and post them. Page 4 is all lettered now, and I'm planning to get the inks finished on Sunday. I'll post that page as soon as it's scanned. Meanwhile, please enjoy contemplating the direction of the story with these constraints in place.

Ben said, "Looking over the constraints up to this point, I found myself laughing out loud at 'The Corrigan,' mainly because I kept hearing it in my head as if it were being pronounced by a sports announcer narrating a past sporting event—as in, 'the catcher has signaled The Corrigan, but the pitcher shakes it off...'

"Anyway, I wandered over to my book shelf and grabbed some comics that I like and decided to isolate some formal element from each of them that I liked and make each of those a constraint. Although I've listed them as 'The xxxx,' none of these things are unique to any of these cartoonists, nor necessarily 'signature moves' from each.

"They're all formal, but hopefully they'll have a significant enough effect on the process that they'll have narrative effect as well."

And here are his constraints:

1. The Ditko: At least one panel must prominently feature a literal drawing of a character’s hands as well as some sort of non-literal graphic representation of something: a spell being cast, a change in psychological state, emanata of some sort, etc. 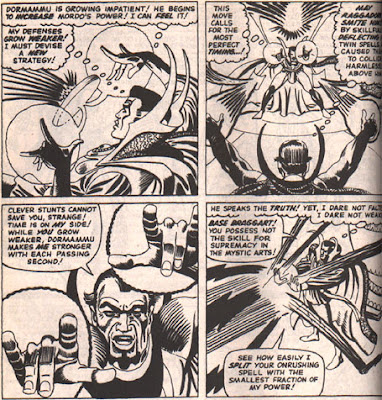 The Bagge: At some point a character must be drawn off-model in order to convey his or her emotional or psychological state. 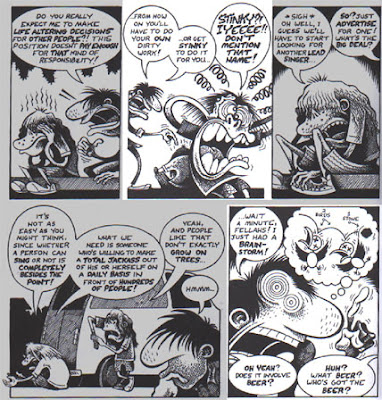 The Langridge: At least one panel must be round and without text or dialog of any sort. Bonus points if it’s serving as in “peek-a-boo” panel as in the first item from the example. 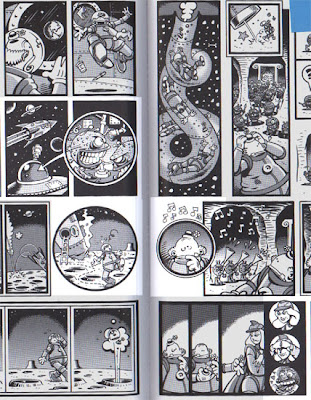 The J. Chris Campbell: Somewhere, a change in the amount of visual background or setting included in the final panel of a sequence must serve as a “reveal” in the narrative. 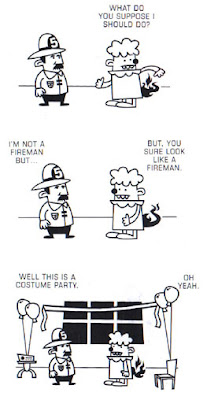 The Segar: Include somewhere, some element of self-reference to some formal element of the comics art form.

So: there they are. Mike will be drawing p. 5. I'm really curious to see which of these five he'll be leaving me with.
Posted by Isaac at 3:38 PM

Nice. These will be fun.

(That should of course be "the pitcher shakes it off" in my opening verbiage)... but I'm definitely looking forward to seeing these in action.

I made that edit for you, Ben.

I have talked with Mike a little bit about how some of these constraints will work, but I'm still not sure which ones he's planning to claim. I wonder whether he's got his plans all worked out now. (His holiday ended tonight, I think.)

Not entirely worked out yet, no, though I'm strongly leaning toward the Ditko, the Segar, and the J. Chris Campbell, for strictly story-related reasons (and besides, I kind of did a version of the Langridge on page 3, so it seems fair to leave that for Isaac). I feel like that might be taking all the really fun ones, though, so I may consider switching out one of them for the Bagge. We'll see...