Mike's leaving me with a few puzzlers at the turn from page three to page four: Why is Kalbi in such a hurry? Who was that mystery assailant? Why doesn't Kalbi seem bothered by his master's death? How on earth is Stepan going to get his map, if the only man who can draw it is dead now? I've been thinking about these things for a couple of days, and I'm still stumped on a couple of them.

Meanwhile, our pal Ben Towle, who is going to be writing the next set of five constraints (covering pages 5 and 6), wants to send us his constraints early, which means I need to give him some sense of where the story is going next.

And I have two of Tom Hart's constraints to us left to fulfill: the "disguise revealed" and the "signs and labels."

Well, here's what I've come up with. It's a rough thumbnail, but you can enlarge it by clicking on it, and it ought to be mostly legible: 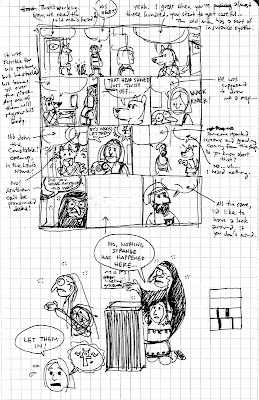 That bone is one of Arntham's bones, and it's going to grow a new body for him, which they'll screw his old head on top of. Unfortunately, a constable is arriving to complicate matters for Stepan and Kalbi.

The "disguise" element is Stepan himself, pretending to be Arntham. He has cast a minor spell to help the illusion be more effective—that's what the symbol for Mercury in that speech balloon is supposed to be. The signs and labels will mostly be little ads and invitations on display in Arntham's shop; there will also be some signs visible in the alley in panels 1 and 2.

In order to put signs on all the walls, I had to create another room to be Arntham's shop (instead of his studio, which was bereft of signs). I made a little diagram for myself to halfway suggest how the doors work, though I admit it doesn't make much sense architecturally. Also, I drew a couple of versions of the constable: garlic-shaped helmet, or smurf hat?

Feel free to kibitz about the layout, the story developments, the constraints, or the smurf hat.
Posted by Isaac at 5:48 PM

Smurf hat all the way, bro.

First, I like what I see here! And part of me really really wants to see a circular arrow in panel five, to indicate the screwing-off action with Arntham's head. You dig me?

Also (and this will come as no surprise to Isaac), I'm glad to see Stepan showing some initiative on this page. He's been pretty passive for the first three pages; it's time for him to take a hand in shaping his own experiences.

I'm also pleased that you took the hint about growing a person out of that bone, and I'm glad you decided to make it Arntham. That frankly makes the most sense, and it's most practical for our hero, too--now he actually has a chance to get that map he needs! It also explains why Kalbi's not too worried about his master's demise, and apparently Kalbi was in a hurry because there would be a problem if Arntham were declared dead.

Now, that last potential problem is a mystery I'll be left with for page 5 (I am next, aren't I?). I'm not sure how willing I am to keep up the complication, though; page 5 is notionally halfway through our story. It needs to start going somewhere, fast!

I also wonder if you need some other indication (maybe in the dialogue) about the difference between the commercial and the private areas of Arntham's lodging. It makes sense for him to have a dual-use space, but will it be clear to readers without explanation?

Finally, a trivial question: why the symbol for Mercury in Stepan's spell? He's god of thieves and messengers, and as quicksilver he has a role in alchemical transformation, but did you have anything else in mind?

I mean for the actual unscrewing of Arntham's head to take place off-stage, in panel 4. Maybe I need to pull back on Stepan some in panel 5--a waist-up shot, instead of a close-up--to make it clear that the head is already off.

I'm also hoping to compose panels 3 and 4 in such a way that it's clear that there are two rooms in Arntham's space. Stepan enters the private room in panel 3; we can see off into it from the public room in panel 4.

I figured Mercury, as a trickster god and also involved in alchemy, would be a good figure to invoke if you were trying to make a disguise more credible. I could also draw Obi-Wan Kenobi in the speech balloon, if you'd prefer.

You are next (page 5 is yours), Mike, so yes, if you choose to, please plan to resolve the mystery of why Arntham can't be declared dead, and maybe give us some hint as to the conflict underlying that lethal attack back on p. 2...

Another alternative for panel 4, to make the unscrewing apparent: a sound-effect coming from off-panel: "Pop!" Perhaps followed by Kalbi saying "There ya go." (Or perhaps not!)

And now that you've mentioned your intentions with panels 3 & 4, I can see in your thumbnails already how you'll be setting up the layout of the rooms.

And no Obi-Wan is necessary, thanks. You have satisfied my intuitions as to Mercury. Carry on!

Here's one good thing about the remaining mysteries: if it would be a problem for Arntham to be declared dead, that suggests that there are reasons for others to wish him dead. So the Constable's role might shed light on that of the mysterious assailant. Something for me to think about during my holiday!

This page is good, Isaac. I'm not seeing all the signs, etc. Are they important to the narrative? Maybe they don't have to be, but do the addition of them add to the cha

I LIKE the complication with the constable, etc, the law on their tail, that sort of thing. And you guys are good at leaving the other with an opening on the next page.

One last nit-picky thing- "A Disguise Revealed" but you made it more like "A Disguised Donned." I think a disguise revealed might have been more of ahem... revelation.

BUT! I am not complaining. You made it funny (the head of a corpse!) so bravo. I really like the story- you guys are kicking ass.

You're right that the signs aren't integral to the story. This was sort of a problem for me, thinking about this page: I had some ideas for narrative trajectories that could follow the signs (as it were), and some that would make Arntham available for mapmaking again (thanks, Mike) ... I decided to favor Stepan's mission over the constraints.

BUT: the signs will probably accomplish one thing, which will be to give some indication of the kind of maps Arntham makes, something we haven't discoevered yet.

As for the "disguise revealed": I'm trying to sneak that one in by having a panel where Arntham seems to be alive again: panel 9, I guess.

If you think it would "count" more as a disguise if I had "Anrtham" taking in panel 9, I can do that.