Well, I got the second page of our constrained fantasy story done four and a half days late. While that seems to bode ill for our schedule (and it's All My Bad), I'm hellbent on catching up on page three over the next three days, to make sure that Isaac isn't delayed on my account.

Somehow, I managed to squeeze in even more panels than master miniaturist Isaac. Check it out: 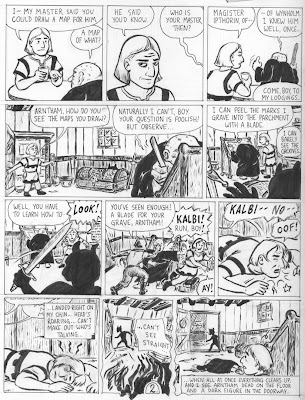 While basically finished, the page needs a few tweaks before it's printed. I forgot to make the tail of Arntham's word-balloon wiggly in the first panel, and I need to remove the ink smudges on the caption in panel 9 (evidence that I'm still a novice at using a Rapidograph with a ruler!).

I also wonder if the first tier, which looks a little bare, needs some real backgrounds for the bazaar ambience. I'm hoping that Isaac provided enough of that on page 1 that the effect will sort of carry over to these panels.

As for the constraints, to satisfy "the Corrigan" I had to avoid showing any character's face other than Stepan's. That actually worked to my advantage with the mysterious assailant and the dark figure in the doorway—I want these two to look, at least momentarily, like one. For the "entrances and exits" constraint, I was glad I took Isaac's advice to compress the storytelling in the first tier so as to win more room later on; I think it's a lot clearer now that there's an exit in panel 10 and an entrance in panel 11.

Finally, a comment on Ipthorin's toponym. "Wynholm" is a shout-out to Diana Wynne Jones, author of such fantasy novels as Howl's Moving Castle

(source for the Miyazaki film

) and Dark Lord of Derkholm

("Wynne" + "Derkholm" = "Wynholm," which can be construed as "islet of joy"). The latter novel grew out of another of her projects, the indispensable Tough Guide to Fantasyland

, an A-to-Z guide to the conventions and clichés of fantasy literature. And sure enough, we've already invoked several, in this project and in the Mapjam. And I'm sure there are more to come...

That page looks really nice. It's very much in keeping with our "pack in the incidents" philosophy. (I'm already hoping I can do some Tintin-type adventure on p. 4, though I am still totally unsure what it's going to involve! Something to do with that bone and a bunch of advertisements...)

It's a real treat to see you raising the bar like this, Mike. I hope I'm up to it (as a cartoonist).

I have to say, though, I'm sorry to see Arntham go. I was sort of looking forward to drawing him again.

What do you use to ink with?

I can tell most of this is done with pen but the inking on the bottom of walls, the chest, and the table Arntham is writing on look different.

Actually, I'm pretty sure that Mike inked that whole page (even the tiny texture lines) with a brush. The lettering and the panel borders are done with a technical pen.

If you look at the enlarged scan, you can even tell that his brush is loaded up with some pretty light ink.

You are correct, sir: our trusty Japanese brush-pen served for everything except the lettering and panel borders, for which I used a Rapidograph for the very first time. I actually tried to use the Rapidograph to do some of the texturing in the leftmost panel on the bottom tier, but I didn't like the look of it--the lines were too regular (duh, it's a technical pen) and even though I used a small-bore nib (00/.30) the lines looked too thick to me. So, argh, I made all the tiny lines with tiny motions of the brush.

Incidentally, these pens were first pointed out to me by Jon Lewis, and I got the details on the brand and where to get it (in New York) from Jason Little. Cartoonists helping cartoonists, that's our motto...

Sorry, not to be confusing with my reference to "pens": I'm using a pen technology (ink in cartridges) married to a brush tip. So no nibs at all, but technically, yes, a pen. That behaves like a brush. With a lot less dipping in an inkwell!