While in Paris, I came across this curious cartoon image on the wrapper of some sugar for my coffee: 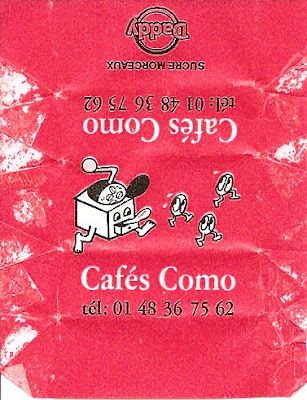 Maybe I'm just too ignorant of the mechanics of grinding and brewing coffee, since a cafetière is about as advanced as I get, but I find this image perplexing. I get that the sweating trio must be coffee beans in flight from the deadly grinder (or whatever that device is), even though they don't look much like the far smaller beans being jolted around in the grinder's cranial cavity. But really, that grinder and its cranium confuse me. The join between the open black hatch and its counterpart doesn't seem right--is it hinged at a corner only?--and I can't help seeing a resemblance on the one hand to Mickey Mouse's ears and on the other to the caps worn by Huey, Dewey, and Louie. But whatever, that's my own hangup, clearly. Still: can someone explain to me what on earth is emanating from the drawer below the grinder's eyes? Is that supposed to be an ineffectual word balloon, with but a limp red stripe for speech? Or, god help me, is that supposed to be its tongue (and if so, a vile and disgusting tongue it is, reason enough for the legged beans to flee)?

Surely I have made too much of what is, after all, merely a scribble on a sugar wrapper. But the image is strangely menacing by design, and more so by the accident of its incomprehensibility. Ils sont fous, ces français!
Posted by Mike at 9:28 PM

Labels: ephemera, not comics, reports from the field

I like the fact that the sugar company's name seems to be "Daddy."

The sugar Daddy thing is quite bizarre.

Wow, now that is one bizarre commercial.

I could do without the rodent conical breasts, myself...