Back in the summer of 2005, Mike and I started drawing two stories that both involve a scholar named Matteu. In both stories, set ten years apart, he travels to a walled city somewhere in the hinterlands. That's as much as we knew about the stories when we started, and I don't want to spoil any future revelations (or revisions) by trying to describe what he discovers there.

This project has been really slow in the making. Although we were originally planning to draw one strip of each story each week, swapping stories every week, a lot of other things have come higher on our list of priorities, and Matteu keeps getting postponed. (If we had kept up with the original plan, we'd have about a hundred pages of story now. As it is, we have almost ten.)

Because we're both a little embarrassed about the glacial pace at which this piece has been moving, we've decided to create a spur for ourselves with the blog here. We'll be posting one of the stories (the first visit to the town) here in weekly installments. The other story will continue to grow at the same pace, but will remain invisible to the internet for now. Until we catch up with new work, I'll post the story in pages instead of in individual strips. (The weekly unit of progress is a strip or a tier, not a page.)

Here are the first three strips: 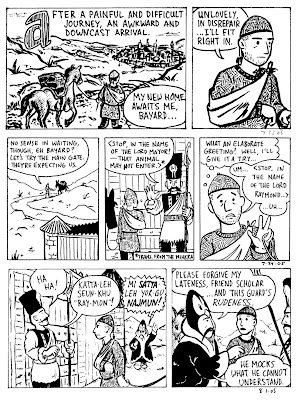 (I recommend clicking to enhance legibility.)

The inspiration for this form of collaboration, by the way, was the Josh Neufeld / Dean Haspiel concoction Lionel's Lament, for which the pair of collaborators alternated two-panel tiers in a six-panel grid, working on the story in two halves simultaneously. It's a pretty fun jam, and Matteu's story has been a lot of fun for Mike and me, as well, though I don't think you'd ever guess that Matteu and Lionel shared much in their origins.

I hope you'll enjoy getting up to speed on Matteu's travels, and that you'll stick with us long enough to see the new material, which is just a few pages away.
Posted by Isaac at 12:25 PM

Will subsequent panels reveal why the man with the frowny mustache wears a hat made from the skull of Chilly Willy?

Actually, Carl, that's the first thing that's addressed on p. 2. You've predicted our next move beautifully, if that's the right way to describe anticipating something that happened three years ago.

I hang my head in shame. Or rather, I tuck it under my penguin wing, abashed...