I pulled out an old notebook (from 2004) the other day, so I could hunt up some details about the apartment I used to keep on Long Island. As I was flipping through the notebook, whom did I see but my old favorite superhero from childhood, Scott Free? 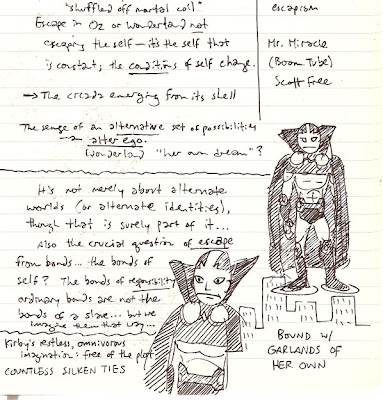 There he is, among notes for a verse essay on escapism. (I've written the poem, but haven't found a place to publish it yet. I keep sending it out.)

I wasn't sure whether I was remembering this right, but I dug out a notebook from the spring of 1995 (the first year I was in New Haven, while I was still taking courses in graduate school), and sure enough, there's Scott Free in pencil, on his aero-discs, sailing among doodles drawn from a discussion of The Tempest. I think the bug-eyed guy on the left is one version of Caliban. 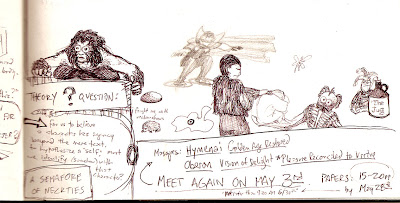 You see, when I was just five or six years old (if I remember right), a friend of my father gave me a big collection of Kirby's work at DC:

almost every issue of Forever People and Mister Miracle; lots of New Gods and Kamandi

and Jimmy Olsen and The Demon.

It was a huge influence on my young mind, I think. Kirby's design sense permeated my childhood head, and his characters seemed to me more "real" than Marvel's characters, in the way that Hercules and Odysseus are more real than characters in a novel or on TV.

A few pages earlier in the 2004 notebook, just goofing around on a page with a to-do list, here's Etrigan: 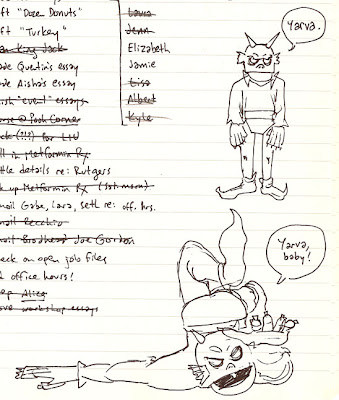 Something about this doodle got me thinking: where have I seen something like that recently? A Kirbyesque physique, in celebratory contortions? Swagger and strut with blocky fingertips? 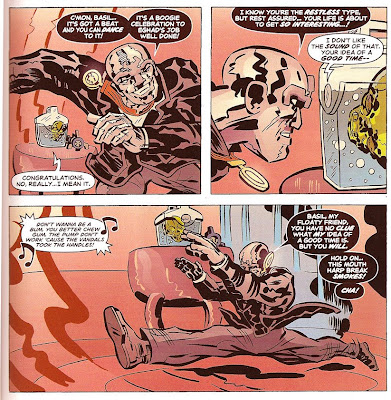