It's the return of "Doodle Penance"!

This past week, someone briefly visited our blog looking for "marbel old school comics." Obviously, there's a spelling problem in that search term, but that's not the only reason our anonymous Googler was disappointed. Although we've certainly doodled classroom images before, and even Tales from the Classroom, we've never quite addressed the topic this person was seeking. 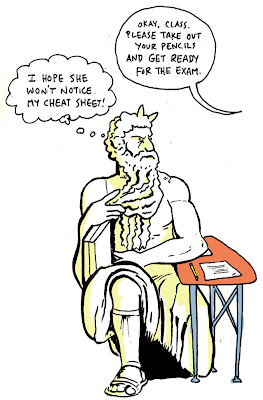 Old? It hardly gets older than the tablets of the law.

School? You can see the little desk.

Comics? Well, maybe or maybe not. Depends on whether you ask Scott McCloud.

Mike? What have you got?

—Hmm...While I also assumed that there was a spelling error in the search term, I reckoned that the correct reading was not "marble" but "Marvel," as in Marvel Comics. Furthermore, I can see why the error occurred thanks to the ungainly layout of the Qwerty keyboard, which places the V and the B keys right next to each other.

So it had to be Marvel Comics that the errant searcher sought. And by "old school" I assume that the searcher wanted vintage material; and so I reckon that it was best to go beyond the Silver Age (aka the Marvel Age proper, with Stan & Jack & Steve and the like) back to the Golden-Age origins of Marvel Comics when it was Timely Comics. Back then, two of the company's biggest stars were the Sub-Mariner and the original, robotic Human Torch, who made for classic adversaries in their elemental opposition of fire and water.

But, you know, it wasn't Marvel Comics that we were asked for, but Marbel Comics. So I'm going to further assume that the typos continue in the searcher's wishes, and since the Qwerty keyboard places the N and the M keys next to each other—on the selfsame (or "sesame") row as the V and the B keys, such that the B and the N are also next to each other—I give you, not the Human Torch versus the Sub-Mariner, but the Hunan Torch versus the Sun-Mariner: 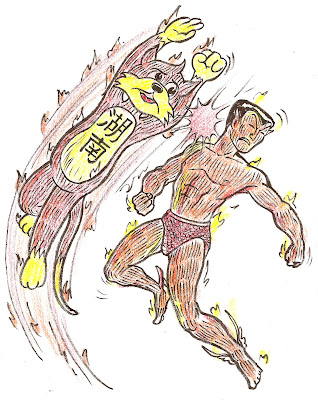 The Hunan Torch is naturally a fiery version of Lan Mao, the eponymous star of the Blue Cat cartoon series, a production of China's Hunan Province (as should be evident by the Chinese characters for Hunan on the cat's chest). Ordinarily Lan Mao would appear blue, but since he's on fire he looks Human Torch-like. The Sun-Mariner is just an igneous version of Namor, basically.

Note how the sheer elemental poetry of the contest of fire and water has been diluted in this battle of balanced fiery forces: evidence enough of the damage done by a tyro's typos, by errors in the script. To avoid such grievous blunders, you might consider ditching Qwerty for the Dvorak simplified keyboard, elegantly evangelized by the fine Vermonter cartoonist Alec Longstreth (and others) at DVZine.org.

Incidentally, for a far superior image, I encourage you to seek out the classic black and white Bill Everett drawing of the Golden Age Human Torch vs. the Golden Age Namor. Accept no latter-day crayon-and-ink substitutes!
Posted by Isaac at 6:40 PM