Google is everywhere, which means that even an ordinary website like ours gets the occasional hit from a far-flung place like Oxford or Rennes, or Israel or Hungary. And this week, we apparently received a very brief visit from a Russian-speaking inquirer, looking for десять докторов. That's "ten doctors," if you can't read Russian.

It's possible that some Muscovite has ten ailments, like Writer's Cramp and Butterflies in the Stomach. Or perhaps some right-wing American kook is trying to make a very subtle and misguided point about socializing health care.

But my theory—indubitably the most plausible interpretation of the search term—is that there's some student out there hoping to do some quick Russian-language drills by making flash cards out of the names of comics characters. In a "Twelve Days of Christmas" sort of build-up, he or she has already printed cards for nine versions of Superman, eight super-gorillas, seven Starmen, six trick archers, five folks with wings, et cetera, and is up to Doctors. (Eleven and twelve are Lanterns and Captains, clearly.)

(Click the pic, please, to enlarge and perhaps admire.) 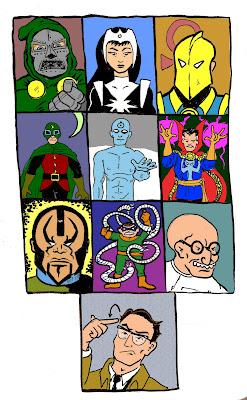 Actually, there could be more in this set. I've thought of another six or seven already, and there are probably more. Somewhere in comics-land there must be a university that gives a lot of honorary degrees.

Anyway, since our Googler wasn't just looking for "ten doctors" but "десять докторов," let me supply the other side of the flash cards, too. 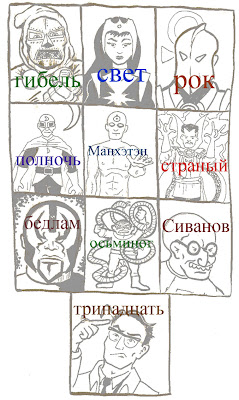 (Russian translations by my friend Zina Deretsky. Thanks!)

Recognize them all? If the dude with the wild eyebrows and the Kirby krackle isn't familiar, you might need to book a trip to the Fourth World.

If you don't recognize that bald little gremlin in the ninth square, you haven't been reading our archives.

And if you don't know the skeptic in the final panel, you'd better prenez garde aux architectes.

And if you think my original color version doesn't look Russian enough, here's a version in sable and gules. 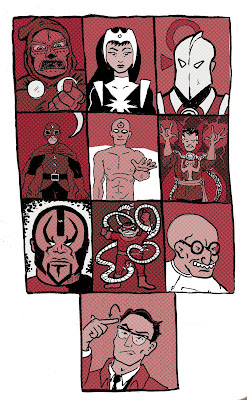 Mike? What have you got this week?

—Man, why should I even bother? But since I must...

Since Russian doesn't use the definite article, I assumed that our Google searcher was interested not just in "ten doctors" but in "THE ten doctors," better, "The Ten Doctors," as in the Rich Morris fan-fic graphic novel I posted about here or just as in a celebration of the ten incarnations of the Doctor (aka Doctor Who), the tenth of whom just finished his tenure on New Year's Day. So I drew quick caricature-portraits of the ten Doctors whose adventures we have seen thus far: 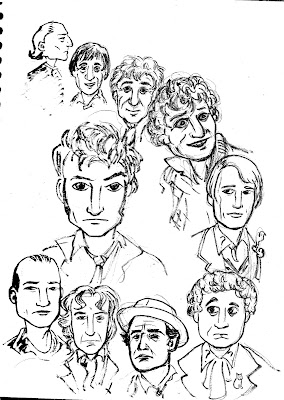 The less comment on this, the better. But if anyone is still interested in a foreign-language variant on Doctor Who, you could do worse than to seek out the vastly superior rendition of the famous theme-tune as if it were Belgian jazz, complete with French spoken lyrics, by the great musician-comedian Bill Bailey.
Posted by Isaac at 2:02 PM