This week's Alphabeasts entry comes from a children's book that I enjoyed when it was brand new and I was a little kid, Mercer Mayer's Professor Wormbog in Search for the Zipperump-a-Zoo.

It's the story of a pith-helmet-wearing, beak-nosed, super-mustached professor-cum-zookeeper who has collected a "beastie" starting with every letter of the alphabet except Z. He travels to the ends of the earth searching for the Zipperump-a-Zoo, then returns disappointed to a home (SPOILER) positively infested with the little drunken gremlins.

Many of the book's beasties are about twenty feet tall, or bigger, but three domestic-size beasties follow Wormbog on his peregrinations, and one of them is an irreverent ickky 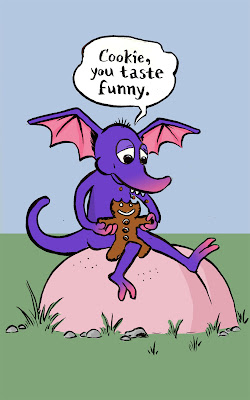 (The gingerbread man probably has salt and pepper and butter on it.)

Normally I'd link to other websites to lead to further information about my alphabeast, but there doesn't seem to be much about the ickky out there on the web. (A marginal critter from a single 35-year-old kids' book? Shouldn't there be a wiki page for it, at least?) Let me tell you what I know:

I know the critter is called the ickky because it appears in the abecedary lineup early in the book. (This splash page, by the way, could be a resource for anyone else working on the Alphabeasts, as long as you don't need it for R or S, which are covered up by characters standing in front of the fence.) 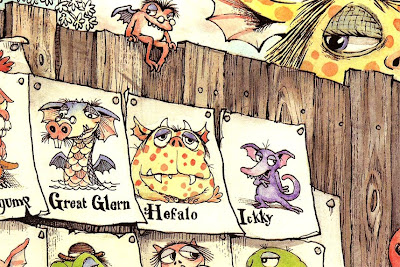 (And yes, quite a few of the beasties have bat-wings for ears.) 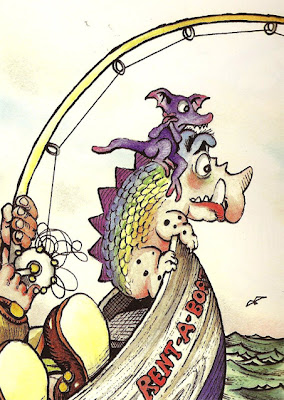 (The kerploppus apparently also appears in Mayer's Little Monster series, which are sequels of a sort to Wormbog. They're a little after my time, so I don't know whether the ickky returns there.)

At one point the kerploppus and the ickky abandon Wormbog in order to work for "Island Joe," but Wormbog encounters them again in a cave deep below the surface of the earth (they're working a concession stand and look mighty bored), whence they follow him home. Following their antics (and the other surplus details in the illustrations) was one of my pleasures in reading the book as a kid.

That said, I have to admit, I found it really tough to ape Mercer Mayer's forms. There's something about his curves or his lines that doesn't feel at all "native" to my drawing hand, and it took me a long time to approximate the look of the ickky.

I don't even think I wound up getting it right, in the end. But them's the breaks. Perfection is for people who don't have papers to grade.

Ha! Nice call back with the gingerbread man cookie!

that's hadpanaguses cooke!!!
it was stuck inside a butt!!!
az

This sort of behavior might be why they call this creature ickky...

Great character (& I'll have to look up that book, never saw it) but once again AZ steals the show with her comment. Icky indeed!

I remember thinking the book was really fun, and I'm looking forward to reading it to my kid when he can understand words better.

Leah, we gotta get you on the hadpanagus bandwagon. Or would you rather draw ichipotomas?

It's never too early... How old is your little guy?