My next post at The Panelists was a reply, of sorts, to Derik Badman's take on one panel from John Porcellino's King-Cat #65.

I should begin by saying that I did not undertake this experiment with the idea that I would improve Porcellino; nor was it my intent to ruin him. My dabbling with comics craft has always been mainly an effort to figure out how comics work. I mean, I draw for fun, too, but mainly I draw in order to see better, so I can write with a more complete sense of a cartoonist’s range of potential decisions. I’ve approached this Porcellino panel in order to understand it better.

Since Derik has already written about the text in this panel, I thought it would make sense for me to focus on the image. And, in the spirit of the “Covered” and “Repaneled” blogs, I thought I’d try to zero in on Porcellino’s style by changing it. So I inked the panel with a brush. 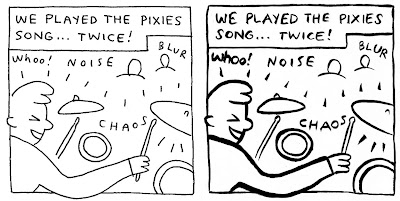 (I am not trying to say my version is any good.)

This side-by-side comparison suggests a few things, even beyond the obvious and undisputed fact that I am clumsy with a brush.

For example, looking at this pair of panels, we might say that the change in drawing tools has less effect on the words than on the images—that my version’s words “mean” in much the same way, but the lines of the drawings start to work differently, even when the lines are “the same.” To an extent, this is surprising, because as Charles and Derik suggested last week, there are ways in which Porcellino’s diagrammatic drawing functions like language, or makes it easy to blur the boundary between text and image. Still, I seem to have altered the drawing more than the text, here.

Porcellino’s minimalism relies heavily on diagrammatic signification: rather than drawing what a drum kit looks like, he’ll draw what it is, leaving out the complicated superstructure in order to show two cymbals, two drumsticks, two drumheads, and the energy around them. A face is the four or five lines that create eyes, nose, mouth, and ears. For those lines to call attention to themselves as lines, rather than as marks in a diagram—for the variability of brush lines to add “life” to the contours—seems to contradict Porcellino’s method of seeing or parsing the world that he draws.

And there’s another important difference. Look at the thick solidity of the drummer’s arm. The brush lines do a lot more than Porcellino’s pen lines to discriminate between foreground and background. In this panel, Porcellino has done some of that work by removing detail from the figures in the background (they’re small, but there would be room for a pair of eyes, at least, on each of those distant faces). But in a lot of Porcellino’s work there’s not much graphic difference between near and far. I think this contributes to the tone of his work, since the distance between near and far, in autobiography, is often also the difference between self and other. To give the environment the same line-weight as the central character is to suggest something strong about the permeability of identity, or the influence of world on self (and vice versa).

This equanimity between subject and environment is, coincidentally, even evident in a small inking decision I had to make about the direction of the energy in the lines surrounding the drummer and his kit: do those lines come from the drummer or from the crowd? (I had done this inking even before the commenter “Nate” focused on the energy lines last Wednesday.)

In Porcellino’s impartial inking, those energy lines are almost like little equals signs, connecting crowd to music rather than directing energy from one place to another. I think this has a lot to do with the sentiment and sensitivity that permeates Porcellino’s stories: his lines imply that everything is interconnected, breathing the same air.

UPDATE: In the comments section, Sean Michael Robinson (of The Hooded Utilitarian) provided an improved re-inking of this Porcellino panel, done with a nib pen instead of a brush. (See the comments below for further details.) 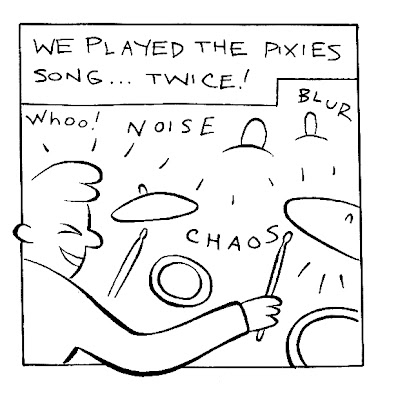 I think this image actually makes my points just as well as my clumsier brush-inked one: that the change in line weight affects the meaning of the text less than that of the image; that the visual distinction between foreground and background seems to undermine something important about Porcellino's tone; and that the energy lines can't "connect" the different parts of the image as well if they reveal or imply the energy's direction.
Posted by Isaac at 12:03 AM