Let me make it clear that although I am a big hadpanagus booster, I love all of the alphabeasts that AZ has been coming up with. If I had the time, I would already have drawn my takes on her first nine creatures. It's not just about hadpanagus over here. No, no.

This week, she invented the ichipototomas, or maybe just ichipotomas (the name has variations), about which she says:

ichipototomas is a quiet shy hipopotomas with antlers.
A super crazy creature toataly. he eats grass! he hides in the trees at day time, so hadpanagus wont come and steal his butt, and he comes down and sits by the ocean at night. but sitting there makes him itch, so he just sits there itching all night. lives under trees and fears birds. if a bird is in the tree above him he sticks his head down in the dirt, with his tail down. he eats mice while hes down in the dirt. if he’s in a tree hiding, and a bird is in same tree, he would jump to another tree or jump onto another planet and back. 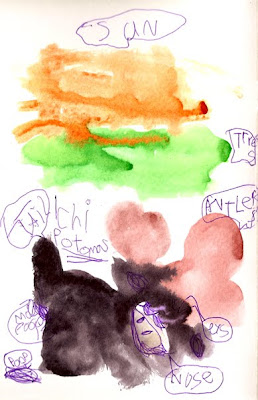 Right away, I wanted to draw my own version, and I started copying AZ's painting as faithfully as I could: 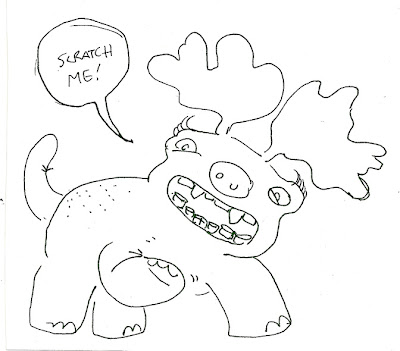 But then I thought that it might be nice to put the ichipotomas up in a tree, hiding its butt from the hadpanagus, hoping that no birds were going to come and scare it into jumping to another planet.

That seemed like a scenario with some potential for drama. I mean, I am sympathetic to the itchy, but scary birds are more fun to draw. 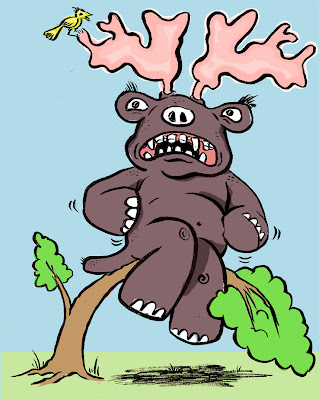 I was sorely tempted to prop that tree up, a la Horton Hatches the Egg, to make it a little more stable, but then I thought that the ichipotomas might need a little spring in the tree when it jumped to its next planet.

Okay, maybe I should get some sleep.
Posted by Isaac at 3:12 AM

That bird! It is terrifying!

AZ, is the pen drawing (with no color) closer to the way that ichipototomases actually look, or just funnier?

I'm glad you like it, Windrose! You should see some of AZ's other creatures, too -- she's a super-creative kid.