Alphabeasts: J is for Jeep

This week's Alphabeasts drawing ought to be familiar to all you comics fans. Back in 1936, E. C. Segar's Olive Oyl received a mysterious package, out of which emerged the mischievous critter known as Eugene the Jeep. 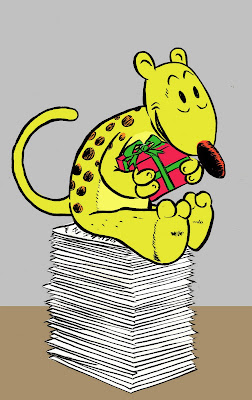 A jeep, you see, is a fourth-dimensional creature that has somehow been tangled up in the form of an African Hooey Hound. Or something like that. What he's doing here is telling me that I can't have any Christmas fun until I finish grading my papers.

There's some evidence that Segar's jeep actually did suggest the name for the motor vehicle, during World War II. I'd always heard that "Jeep" came from "GP" for "General Purpose," but apparently that may be apocryphal etymology. If it seems crazy to you that a marginal comics character would be known well enough to lend a nickname to a vehicle, remember that Eugene was also featured in moviehouse cartoons.

"The jeep is a magical dog that can disappear an' things."

I have to say, I found it a lot easier to wrap my head (or my pencil fingers) around Segar's forms, compared to Mercer Mayer's. Must be from reading all that Krazy Kat: Eugene seems to me to be a member of the same fraternal order as Ignatz Mouse.

Anyway, I was happy enough with my pencils this time around that I wanted to save them in case I messed them up. So here are a couple of "process" images, first of the stuff I erased under the inks in the final drawing... 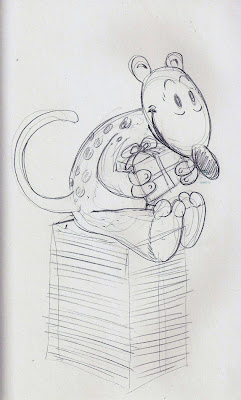 ... and then of the doodles that helped me figure out how the jeep works. 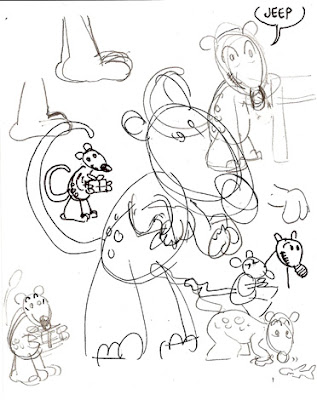 Next week: a creature you may not ever have heard of, from a very famous book.
Posted by Isaac at 1:53 AM

Oh joy, a Popeye beast! You've definitely captured that Segar spirit & you also gave me a big smile on a rather cranky day... :-)

And I never knew that the Jeep was named after the Jeep!

I'm glad that you think I caught the Segar spirit. I wish I knew Thimble Theater better than I do. It's been on my reading list for a while, but I'm not even caught up with buying the reprints! (In fact, the Fantagraphics volume that features the Jeep is still only on my wishlist.)

But I think I could get used to that "bigfoot" aesthetic. It makes sense to me. One of the things I'm finding recently (in part by drawing my versions of AZ's beasts) is what my best "voice" as a cartoonist looks like, and I think it's more informed by Herriman and his bigfoot compeers than I might have guessed.

You say "bigfoot," I think of R. Crumb (more for his frequent 60s cartooning style than for his Bigfoot character), and I therefore think "Jeep on truckin'..."--imagine Eugene in the iconic "truckin' my blues away" pose...