I am not sure how obscure this week's Alphabeasts critter is, though I've had a really hard time finding information about it online. I thought that Yo Gabba Gabba! was a thing these days, but maybe my impression of it is distorted by the fact that I read Evan Dorkin's blog (he is an occasional contributor to the show) or by the usefulness of the program in holding the attention of very small children.

But maybe if you're a fan of Yo Gabba Gabba!, or if you've got a wee one in the house, you will have heard of the oskie bugs. 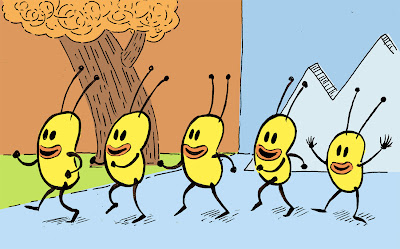 Like Gooble, the oskie bugs are denizens of Gabbaland that appear infrequently but are treated more or less as known quantities by the show's main characters. I gather that there's an episode in the third season in which the main characters shrink down to follow the oskie bugs into their tunnels, but I'm basing my drawing here on the oskie bugs I'm familiar with. (I have only seen the episodes I can stream on Netflix, but I have seen those many times now.)

In episode 7 of the first season, "Friends," at about five minutes into the program, Toodee and Plex (the magic robot) are waiting quietly in Toodeeland to see whether the oskie bugs will come out. (One of the things I like about them: the oskie bugs will only come out if everyone is quiet. I plan to make use of that fact in the future.) 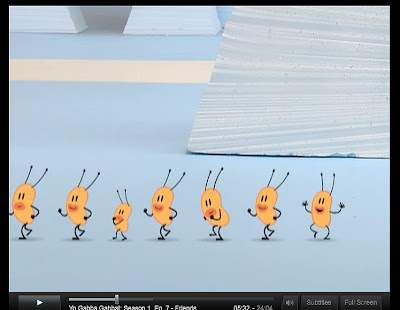 When they do come out and march across the screen, Toodee is so psyched that she wants to give Plex a high five about it; this leads to a song in which she explains what a high five is, and what it signifies. I've found a couple of badly recorded clips of the song, but none that starts early enough that you can see the oskie bugs. (That's why I snagged the screencap above.)

If you'd like to see someone "re-enacting" the scene with dolls, that's up to you.

Next week: I think my next Alphabeast had a cameo in an Eddie Murphy movie.
Posted by Isaac at 12:05 AM

My kids are too old to have yogabbagabba'd, but I quite like these little beany critters!

Aw, cute! AZ and I like Yo Gabba Gabba, but we never watched it much because we don't have cable.

Well, if you have Netflix, the first two seasons are streamable. But it sounds like you might not have that either...

Oh, we have Netflix, but AZ has moved on to big kid shows like Curious George. (Although she still alludes to "there's a party in my tummy, oh yeah")