Alphabeasts: P is for Pushmi-Pullyu

This week's entry in the "Alphabeasts" project gave me a little trouble, because it's such a strange creature that I kind of couldn't figure out how it works. As it is, I wound up departing from my available models considerably.

Friends, I give you the pushmi-pullyu. 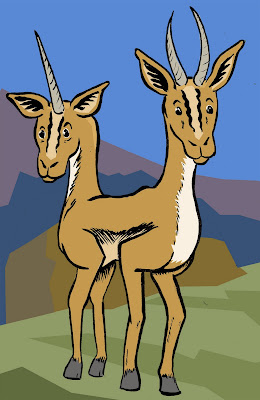 I know what you're thinking. "I've seen that movie, Isaac, and the pushmi-pullyu is more like a llama thing than a gazelle thing. It doesn't have horns. It likes to dance. I've never seen anything like it, but your drawing isn't much like it, either."

But believe me when I say this has more fidelity to the original than what you'll see in the Rex Harrison movie (or the Eddie Murphy one). In Hugh Lofting's original The Story of Doctor Dolittle; Being the History of His Peculiar Life at Home and His Astonishing Adventures in Foreign Parts (1920), the pushmi-pullyu is an African animal (and that alone quashes any llama/alpaca/vicuña/guanaco theory) descended from "the Abyssinian gazelles and the Asiatic chamois" on one side and "the last of the Unicorns" on the other. 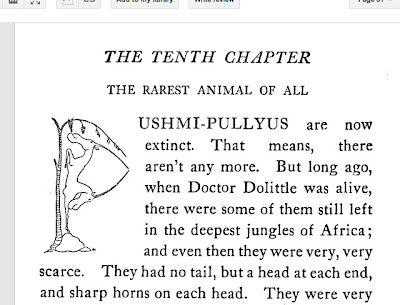 In fact, the author himself illustrated the first editions of the book (which you can now see for yourself, thanks to Google), and his pushmi-pullyu definitely has horns. 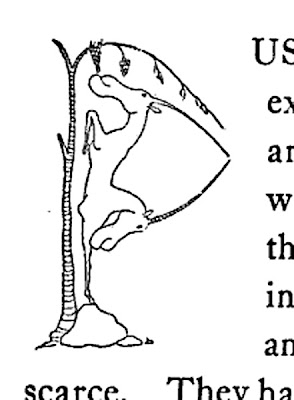 It also seems to have only one eye on each side of its head. 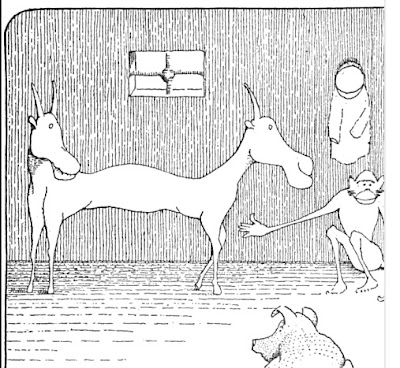 So, rather than the cordial double-llama, Lofting gives us a rubbery chimera, a sort of combination of the cyclops, the amphisbaena, and the unicorn, with a dash of gazelle and platypus thrown in. Egad. It wasn't an easy creature to draw. I had a few false starts. 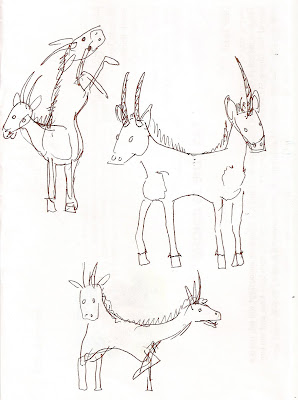 I figured out quickly enough that I didn't want to make the posture symmetrical, though I suppose I could have saved myself some drawing if I'd done that. I also thought, for a while, that I might swipe my own drawing of the gerenuk from the Animal Alphabet, but those results weren't great. 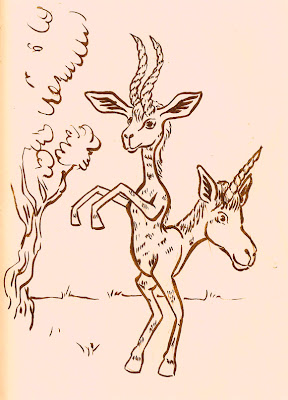 This looks like a regular gazelle trying to fool hadpanagus by putting a papier-mâché horsey head on its rump. So, so lame.

I include that image only to chastise my own drawing hand, to remind myself that although I am getting better I am still not a very natural cartoonist. Please, pass it by.

Next week is the letter Q. I'll have to use one of my aces in the hole.
Posted by Isaac at 3:12 AM

Ah, yes, I read (& loved) the original Dolittle books as a kid, & your Pushmi-Pullyu is right on target.

And you're right about the earlier pose looking more like a Hadpanagus-butt-buffer-disguise as well... Haha! Think how frustrated H. would be upon meeting this creature!