Alphadonjon: B is for Boobooloo, King of the Olfs and Brock.

For this week's Alphabooks, B is for Boobooloo, King of the Olfs, and for Brock. 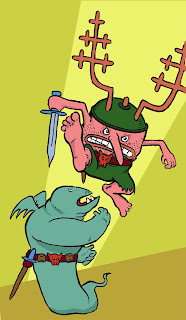 You may note that these fellows are both sporting the same belt and sword that Ababakar Octoflea was wearing last week. That's because they are, like Ababakar, both former wearers and wielders of the Sword of Destiny. Herbert the Duck, one of Dungeon's main characters, retrieves the Sword from Ababakar's beheaded body, and discovers not long thereafter that if anyone tries to take the sword from him — or if anyone merely touches his belt — Herbert will be transformed in a cloud of bones and ectoplasm into a previous wearer of the Sword, to avenge the transgression. (This is handy, because the sword won't let Herbert use it until he accomplishes three great deeds without it. Also, at least initially, he's quite a wimp.)

Anyway, Boobooloo is the first previous wearer of the Sword that gets summoned up, and he's a firecracker. Oh, he's small, but he's like a little basketball with fists and feet of steel. He shows up a few other times, including an extended appearance in one of the Monstres volumes set during the cataclysm at the end of the world.

As for Brock, well, 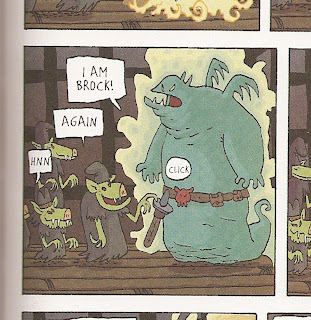 Now you know as much as I do. In the entirety of Dungeon, he appears in just one panel. But he's got a really fun design, doesn't he?

It took me a little while to figure this drawing out, mostly because I didn't know how these two guys would interact. Would they fight? They're like brothers in arms, because they're both wearers of the Sword. Maybe they'd high-five. 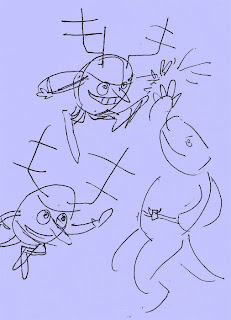 (You'll notice that at the brainstorming stages I'd forgotten that Brock was a snake from the waist down.)

Then I thought, "Okay, one guy is big and beefy, and the other one's a little berserker. Isn't there some sort of baseball metaphor for that sort of deal?"

Then it was just a matter of drawing. And taking away Brock's legs.

Next week, one more wearer of the Sword of Destiny, and maybe someone else.
Posted by Isaac at 4:36 AM

What fabulous characters! Especially those antler-antennae thingies. Clever to throw in a throw, too.

They're antennas. In one scene, an olf utters an oath; that olf oath is "By the antennas of Boobooloo!"

As for the toss, I've fixed the link that was supposed to be my joke about the "fastball special."

You know, I did wonder about that link. (Was I missing something, I thought; now I am somewhat relieved.)

I also love the antlerennas. They're rad.