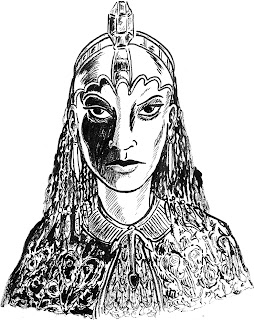 Belakane (aka Belacane): Queen of Zazamanc, wife of Gahmuret the Angevin, and mother of Feirefiz —who is himself the half-brother of the eponymous hero of Wolfram von Eschenbach's Parzival, where Belakane appears. (Zazamanc is a made-up land somewhere in the Middle East, not far from Baghdad, apparently.)

I wanted to include Belakane in my alphabet in part to thwart an all-too-easy tendency (for me) to fixate on the knights of Arthurian literature and legend, given that many other very interesting characters aren't knights at all (even if, as is almost unavoidable in Arthuriana, they have close ties to knights or knighthood). Belakane is also very unusual among non-Christian women of color in medieval European Christian texts. While the narrator makes frequent mention of her dark complexion by way of contrast with the conventional blond standard of female beauty in medieval romances, he also declares that she is thoroughly beautiful. Furthermore, several other romances that feature love affairs between pale Christian knights and dark-complected non-Christian queens or princesses all too frequently transform the heroine by not only converting her to Christianity but by blanching her skin tone (that is, if she isn't already pale in comparison to her dark brethren, a contrast taken as a token of her inner readiness to convert).

Belakane does suffer for her non-Christian confession—her husband loutishly abandons her with no notice while she is twelve weeks pregnant with their child, on the pretext that he now has misgivings about marriage with a non-Christian. But she isn't literally whitewashed, and she is one of several non-Christians in Parzival who are treated with a sympathy that is atypical of European medieval texts from Christendom, let alone a text as saturated in Christian matters as Parzival (which is a story of the Grail in its religious guise—though it's also in the guise of a magical rock, which, again, is atypical).

Not too many art notes this time: I was in a hurry to get a drawing done after the end of Shavuot but before midnight (which is bearing down on me as I type), so this drawing was the first go. I began the penciling with reference to a photograph of James Baldwin, believe it or not, because the image on the cover of my edition of Notes of a Native Son has a really arresting contrast of light and shadow which I have more or less transferred to Belakane.

One of the only details that Wolfram provides by way of description (other than saying that Belakane's skin is dark) is that her crown consists of a single ruby. I'm not sure how that works, so I've just crowned her crown with a very large jewel.

As for her mantle, what may look like random squiggles is more deliberate than it appears, because my splotchy spot blacks are meant to pick out a pattern of intertwining hearts and anchors that alternative their orientation up and down, up and down. Why hearts and anchors? Because the emblem of Gahmuret, the husband who abandoned Belakane, was an anchor, but Belakane loved him all the same.

Anyhow, that's my B drawing for the Arthurian alphabet. I was this close to drawing Balin (possibly with his brother Balan), but changed my mind at the last minute. Maybe I'll save them for an Alternative Arthurian Alphabet...
Posted by Mike at 11:58 PM

As usual, your erudition on Arthuriana bends my brain.

But let's hear it for the spontaneity of drawing in a hurry! I like the way Belakane turned out.

Are you going to be varying up the poses, backgrounds, etc., with these portraits, or are you sort of aiming for a "yearbook" effect?

Sorry for the brain-bending Arthurian arcana. After all these years of working it up it's hard to rein it in. (I nearly included references to "the literature," then remembered who I am and where I was posting.)

I'm glad you liked the way the drawing turned out--thanks for saying so.

As for "yearbook" vs. variety: my intention was (and is) to be various--maybe I'll go ahead and draw up my very different Balin/Balan image sometime, since it's in my head already--but the time crunch limited my ambitions somewhat. Yet there might be something to the "yearbook" effect...I won't rule it out just yet.